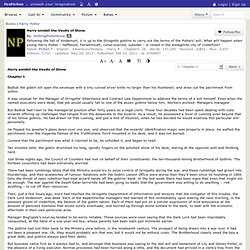 It was unusual for the Manager of Gringotts' Inheritance and Contract Law Department to address the terms of a will himself. Even when the named executors were dead, that job would usually fall to one of the dozen goblins below him. Workers worked. But Badluk had risen to the managerial position after forty years as a legal clerk. He flipped his jeweller's glass down over one eye, and observed that the wizards' identification magic was properly in place. Content that the parchment was what it claimed to be, he unfolded it, and began to read. Ten minutes later, the goblin drummed his long, spindly fingers on the polished stone of his desk, staring at the opposite wall and thinking hard.

Manager Bogripple's sources tended to be eerily reliable. One figure was very short, and one was very tall. "There. "Hmmmm. " Harry Potter and the Return of the Squib Son. I do not own the Harry Potter series, but I do own the character Daniel Potter. 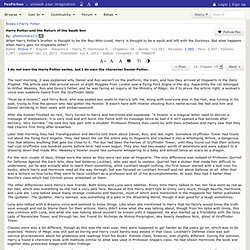 The next morning, it was explained why Daniel and Ron weren't on the platform, the train, and how they arrived at Hogwarts in the Daily Prophet. The article said that around seven or eight Muggles from London saw a flying Ford Anglia in the sky. Apparently the car belonged to Arthur Weasley, Ron and Ginny's father, and he was facing an inquiry at the Ministry of Magic. As if to prove the article right, a woman's voice was suddenly heard from the Gryffindor table. "Must be a Howler," said Terry Boot, who was seated two seats to Harry's left. Falling Back Into A New Future. Prologue: Time and Fate Disclaimer: All recognisable characters, names, places are property of their respective owners. 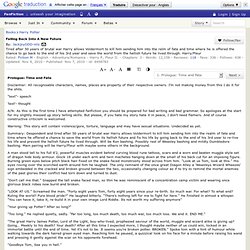 I'm not making money from this I do it for the shits. "text"- speech 'text'- thought A/N: As this is the first time I have attempted fanfiction you should be prepared for bad writing and bad grammar. Warning: This story will contain violence/gore, torture, language and may have sexual situations. Black phoenix. Summary: Betrayed and killed by the one they considered their best friend, Harry and Hermione made a different decision when they found themselves at King's Cross station. 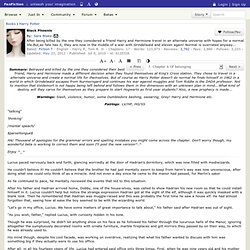 They chose to travel in a alternate universe and create a normal life for themselves. But of course as Harry Potter doesn't do normal he finds himself in 1962 in a world in which Grindelwald escapes from Nurmerngard and continues his war against muggles and Tom Riddle is the DADA professor. Not to mention that Voldemort is not happy being left behind and follows them in this dimension with an unknown plan in mind...What kind of destiny will they carve for themselves as they prepare to start Hogwarts as first year students? Also, a new prophecy is made... Harry Potter, Rise from dust. Chapter 7. 6 Jun 1992. 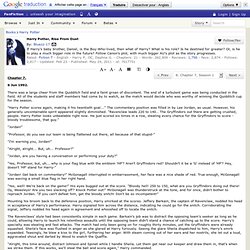 There was a large cheer from the Quidditch field and a faint groan of discontent. The end of a turbulent game was being conducted in the field. All of the students and staff members had come by to watch, as the match would decide who was worthy of winning the Quidditch cup for the season. The Witches' Conspiracy. Hello fans. 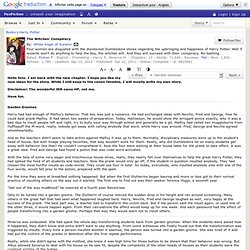 I am back with the new chapter. I hope you like my new ideas for the story. While I still keep to the canon timeline, I will mostly write my own story. Disclaimer: The wonderful JKR owns HP, not me. Have fun. Garden Gnomes. The Moment It Began by Sindie. Disclaimer: All Harry Potter characters are copyright of J.K. 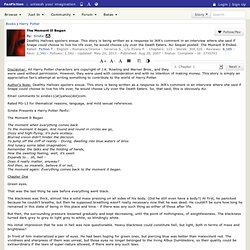 Rowling and Warner Bros., and they were used without permission. However, they were used with consideration and with no intention of making money. This story is simply an appreciative fan's attempt at writing something to contribute to the world of Harry Potter. Author's Note: Deathly Hallows spoilers ensue. This story is being written as a response to JKR's comment in an interview where she said if Snape could choose to live his life over, he would choose Lily over the Death Eaters.

Email comments to sindie11(at)yahoo(dot)com. Rated PG-13 for thematical reasons, language, and mild sexual references. Runic animagi. Disclaimer: I do not own Harry Potter! 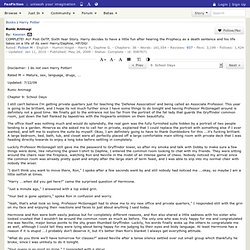 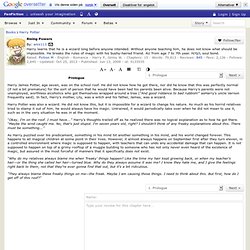 He did not know how he got there, nor did he know that this was perfectly normal (if not a bit premature) for the sort of person that he would have been had his parents been alive. Because Harry's parents were not unemployed, worthless alcoholics who got themselves wrapped around a tree ("And good riddance to bad rubbish! " asHarry's uncle Vernon frequently said). Harry Potter and the true heir. James had never felt more excited in his life. 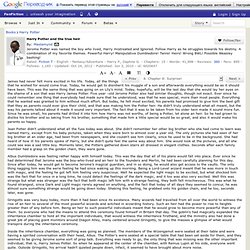 Today, all the things that he wished for would come true. Today, he would get to disinherit his muggle of a son and afterwards everything would be as it should have been. This was the same thing that was going on on Lily's mind. Today, hopefully, will be the last day that she would lay her eyes on the shame of a son that was Harry James Potter. Black phoenix. The mirror of possiblilities. Disclaimer: This story is based on J.K Rowling's Books, which are 100% NOT mine. Summary: the war is over, and Harry wants to continue with his life, a new home, Auror training and maybe even get married and have children in time.

But his hopeful plans for the future encounter a glitch, in the form of an Alternative world where his parents are alive and he has siblings. Runic animagi. It starts. Ok people, first fic, quite nervous. This is a Post OotP fic, the usual Harry gets proactive thing, hopfully its original, not my fault if it isn't, i've not read all of them people, tis quite impossible i think. Anyway, this is the traditional Harry coming out of depresion chapter. Enjoy!!! The elementalist. The Elementalist Hey, before you get started this has been done before and I have almost completely copied the first part of this story from RETURN OF THE ELEMENTAL. That is an absolutely fantastic story and I loved the start to such a ridiculous extent I have copied much of it, I know thats gay and all but I wanted to take the story in a different direction eventually and I couldnt bring myself to ruin such a great start.Dont worry its not exactly the same as the first.

Heres the link if you wold much rather read a much better story lol : .net/s/2786990/1/Return_Of_The_Elemental Chapter 1 Yep, he thought bitterly, nowhere better than the Dursley's to relive your worst memories. He also remembered being surprised when they came to the car park and he saw the Dursleys new car. "Missing your weirdo friends Harry? " "That's a shame but don't worry because me and my friends have certainly missed you. Harry knew what this meant. Return of elemental. Disclaimer: I don't own anything written in this story. Summary: At the end of Harry Potter's 4th Year he returns to the Dursleys.

Five days later there is a Death Eater attack at Privet Drive. The entire Wizarding world is mourning the loss of the Boy-Who-Died. Two years later on September 1st all students arrive for another year at Hogwarts School Of Witchcraft And Wizardry. In the Great Hall students are catching up with friends and finding their way to their respective house tables, settling down for the start of term feast.

Fanfic: Stranger in a Too Familiar Land Ch 12, Harry Potter. Chapter 12 – Questions Questions Everywhere "I'm sorry Minister, but I have been unable to find any information on Harrison Black before this year. There are no records of his birth or of his having taken the Ordinary Wizarding Level exams, whether in Britain or in any other ICW countries. " Minister of Magic Lucius Malfoy held the clerk from the Wizarding Examinations Authority under a cool glare.

"I must have misunderstood you. I am quite certain that you are not telling me that an unidentified wizard with an unknown record was hired as an adjunct staff member at Hogwarts, has constant access to the children of prominent Families and no one knows who he is or whether he's qualified in any manner to teach those students.

Lastly, reviews and constructive suggestions are welcome, but flames are not. Don't like the story don't read it. The Perfect Lord: Harry James Potter Chapter 1, a harry potter fanfic - FanFiction.Net. The soft pitter patter of the rainfall was a thing of the past, as the rain had been crashing down with incredible force in the suburbs of Little Whinging, and in a house that looked no different than any other, especially to the casual observer, stood in a place where everything was normal, that house was Number 4, located on a street called Privet drive.

It was clean-cut; the hedges were trimmed, the rose beds blossoming magnificently. Harry Potter and the Alien Realit. A/N: Hey All. This is a new idea I had about separating the seasons, and a way to stretch my writing muscles. This will be the first Interlude, taking place between season one and two, about the time that General Hammond gives SG-1 vacation time after stopping Apophis.