8 Amazing Facts From The World of Science - Nischal's Blog. Science is the most amazing thing in this universe. 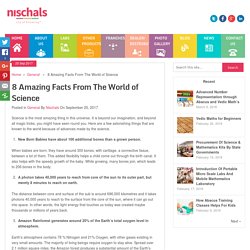 It is beyond our imagination, and beyond all magic tricks, you might have seen round you. Here are a few astonishing things that are known to the world because of advances made by the science. Biology Lab Demo. Life and Times of Albert Einstein - Nischal's Blog. Even though he did not receive the Nobel Prize for it, Albert Einstein is most well-known for his discovery of Theory of Relativity. 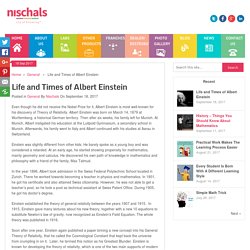 Albert Einstein was born on March 14, 1879 at Wurttemberg, a historical German territory. Then after six weeks, his family left for Munich. At Munich, Albert instigated his education at the Luitpold Gymnasium, a secondary school in Munich. Afterwards, his family went to Italy and Albert continued with his studies at Aarau in Switzerland. Einstein was slightly different from other kids.

In the year 1896, Albert took admission in the Swiss Federal Polytechnic School located in Zurich. Einstein established the theory of general relativity between the years 1907 and 1915. Soon after one year, Einstein again published a paper brining a new concept into his General Theory of Relativity, that he called the Cosmological Constant that kept back the universe from crumpling in on it.

Every Student Needs a Laboratory - Nischal's Blog. Amazing things come out of experimentation! 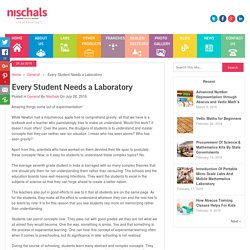 While Newton had a mischievous apple tree to comprehend gravity, all that we have is a textbook and a teacher who painstakingly tries to make us understand. Would this work? It doesn’t most often! Over the years, the drudgery of students is to understand and master concepts that they can neither see nor visualize. I mean who has seen atoms? Apart from this, scientists who have worked on them devoted their life span to postulate these concepts! The average seventh grade student in India is barraged with so many complex theories that one should pity them for not understanding them rather than censuring. History - Things You Should Know About Mathematics - Nischal's Blog. Mathematics is just about as old as the existence of this universe. 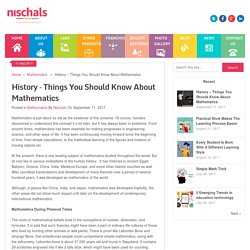 Of course, humans discovered or understood this concept it a lot later, but it has always been in existence. From ancient times, mathematics has been essential for making progresses in engineering, science, and other ways of life. It has been continuously moving forward since the beginning of time, from simple calculations, to the methodical learning of the figures and motions of moving objects etc. At the present, there is one leading subject of mathematics studied throughout the world. But its root lies in various civilizations of the human history. Although, in places like China, India, and Japan, mathematics was developed implicitly, the other areas did not show much impact until later on the development of contemporary international mathematics. Every Student Is Born With A Different Learning Style - Nischal's Blog. For years together teachers and students had to go through a tough decision of how to learn and teach. 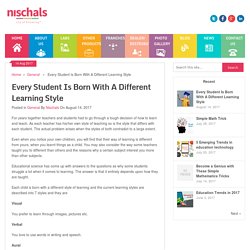 As each teacher has his/her own style of teaching so is the style that differs with each student. The actual problem arises when the styles of both contradict to a large extent. Even when you notice your own children, you will find that their way of learning is different from yours, when you learnt things as a child. You may also consider the way some teachers taught you to different than others and the reasons why a certain subject interest you more than other subjects.

Nischal's Blog - The lab experiments are integrated with classroom teaching and learning practices. Physics ncert book. How to make learning Physics fun in schools-nischals smart learning. If You Know the Secret Sauce, Physics Can be Fun. 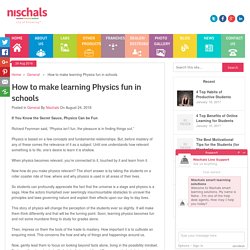 Nischal Narayanam Mathematics. Nischal's Blog - The lab experiments are integrated with classroom teaching and learning practices. As said by the influential Nelson Mandela, “Education is the most powerful weapon which can change the world.” 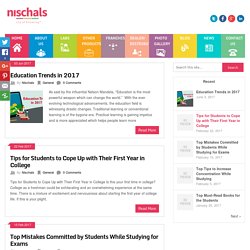 With the ever evolving technological advancements, the education field is witnessing drastic changes. Traditional learning or conventional learning is of the bygone era. Practical learning is gaining impetus and is more appreciated which helps people learn more. Teaching Mathematics to Special Children - Nischal's Blog. Nischal narayanam mathematics. Advantages of Learning with an Abacus courses. Advantages of Learning with an Abacus - Nischal's smart learning. The Ripple Effect of Abacus Learning Earlier only a hypothesis but now a fact, based on research data and high tech machinery, using an abacus to perform mental calculations develops the right brain. 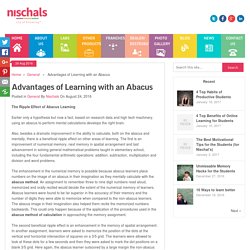 Also, besides a dramatic improvement in the ability to calculate, both on the abacus and mentally, there is a beneficial ripple effect on other areas of learning. The first is an improvement of numerical memory, next memory in spatial arrangement and last advancement in solving general mathematical problems taught in elementary school, including the four fundamental arithmetic operations: addition, subtraction, multiplication and division and word problems. Mathematics laboratory. Teaching Mathematics to Special Children - Nischal's Blog. How to help School Students Understand Geometry. How to help Students Understand Geometry Playing with shapes ushers children into geometry long before they set foot in the classroom and formally study it. 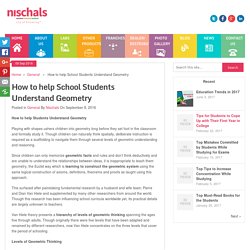 Though children can naturally think spatially, deliberate instruction is required as a scaffolding to navigate them through several levels of geometric understanding and reasoning. Since children can only memorize geometric facts and rules and don’t think deductively and are unable to understand the relationships between ideas, it is inappropriate to teach them geometry, the Euclid way which is learning to construct the geometric system using the same logical construction of axioms, definitions, theorems and proofs as taught using this approach. This surfaced after painstaking fundamental research by a husband and wife team: Pierre and Dian Van Hiele and supplemented by many other researchers from around the world. Van Hiele theory presents a hierarchy of levels of geometric thinking spanning the ages five through adults. Visual: Teaching Mathematics to Special Children. Teaching Mathematics to Special Children - Nischal's Blog.