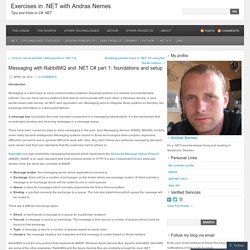 Domain Driven Design with Web API extensions part 6: domain events with RabbitMq. Introduction In the previous post we looked at some basic theory behind messaging between independent applications. 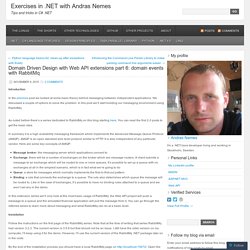 We discussed a couple of options to solve the problem. In this post we’ll start building our messaging environment using RabbitMq. As noted before there’s a series dedicated to RabbitMq on this blog starting here. You can read the first 2-3 posts to get the basic idea. In summary it is a high availability messaging framework which implements the Advanced Message Queue Protocol (AMQP). Message broker: the messaging server which applications connect toExchange: there will be a number of exchanges on the broker which are message routers. In this extension series we’ll only look at the most basic usage of RabbitMq: the Web API project will push a message to a queue and the simulated financial application will pull the message from it. Installation Follow the instructions on the first page of the RabbitMq series. MassTransit. Enterprise Integration Patterns - Messaging Patterns Overview. 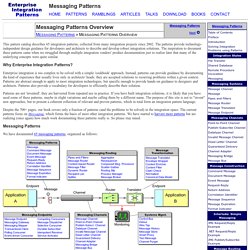 The patterns provide technology-independent design guidance for developers and architects to describe and develop robust integration solutions. The inspiration to document these patterns came when we struggled through multiple integration vendors' product documentation just to realize later that many of the underlying concepts were quite similar. Combining Service-Oriented Architecture and Event-Driven Architecture using an Enterprise Service Bus. Develop and deploy your nextapp on the IBM Bluemixcloud platform. 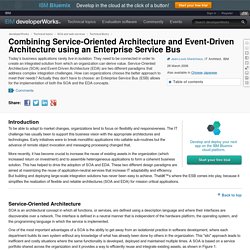 Start your free trial. Enterprise Service Bus. By Jürgen Kress, Berthold Maier, Hajo Normann, Danilo Schmeidel, Guido Schmutz, Bernd Trops, Clemens Utschig-Utschig, Torsten Winterberg Answers to some of the most important questions surrounding the term "enterprise service bus" using concrete examples, so that the areas of application that can be deemed "correct" for ESBs can be clarified. 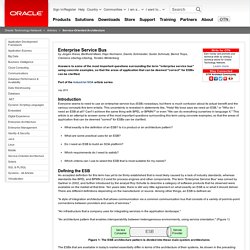 Part of the Industrial SOA article series July 2013 Introduction. B-31-Fernandez.pdf. What is an ESB? An Enterprise Service Bus (ESB) is fundamentally an architecture. 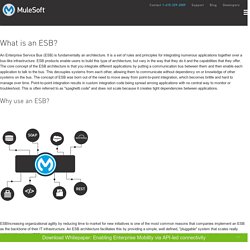 It is a set of rules and principles for integrating numerous applications together over a bus-like infrastructure. ESB products enable users to build this type of architecture, but vary in the way that they do it and the capabilities that they offer. The core concept of the ESB architecture is that you integrate different applications by putting a communication bus between them and then enable each application to talk to the bus. This decouples systems from each other, allowing them to communicate without dependency on or knowledge of other systems on the bus. The concept of ESB was born out of the need to move away from point-to-point integration, which becomes brittle and hard to manage over time. Why use an ESB? ESBIncreasing organizational agility by reducing time to market for new initiatives is one of the most common reasons that companies implement an ESB as the backbone of their IT infrastructure.

Implementation. Enterprise Integration Patterns - Message Bus. An enterprise contains several existing systems that must be able to share data and operate in a unified manner in response to a set of common business requests. 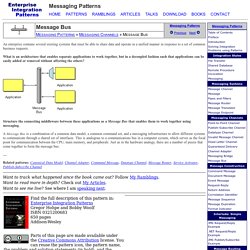 What is an architecture that enables separate applications to work together, but in a decoupled fashion such that applications can be easily added or removed without affecting the others? Structure the connecting middleware between these applications as a Message Bus that enables them to work together using messaging. A Message Bus is a combination of a common data model, a common command set, and a messaging infrastructure to allow different systems to communicate through a shared set of interfaces. This is analogous to a communications bus in a computer system, which serves as the focal point for communication between the CPU, main memory, and peripherals. Integration Broker or Enterprise Service Bus? Azure Event Hubs vs Azure Messaging. Recently Ive been chatting with a few people about Azure Service Bus and it’s clear that in the community there is some confusion about the differences between Azure Service Bus Messaging (queues and topics) and Azure Service Bus Event Hubs and where you should use each. 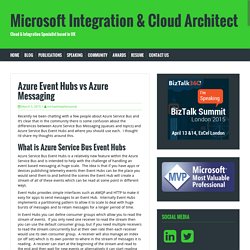 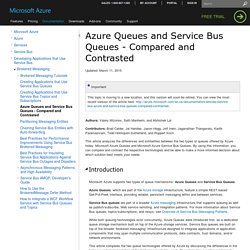 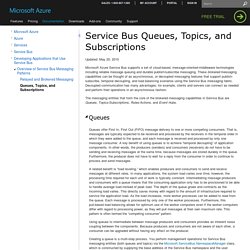 That is, messages are typically expected to be received and processed by the receivers in the temporal order in which they were added to the queue, and each message is received and processed by only one message consumer. A key benefit of using queues is to achieve “temporal decoupling” of application components. In other words, the producers (senders) and consumers (receivers) do not have to be sending and receiving messages at the same time, because messages are stored durably in the queue.