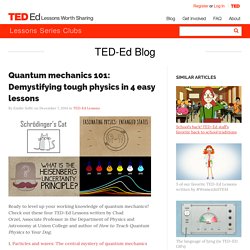 Check out these four TED-Ed Lessons written by Chad Orzel, Associate Professor in the Department of Physics and Astronomy at Union College and author of How to Teach Quantum Physics to Your Dog. 1. Particles and waves: The central mystery of quantum mechanics One of the most amazing facts in physics is that everything in the universe, from light to electrons to atoms, behaves like both a particle and a wave at the same time. But how did physicists arrive at this mind-boggling conclusion? 2. Austrian physicist Erwin Schrödinger, one of the founders of quantum mechanics, posed this famous question: If you put a cat in a sealed box with a device that has a 50% chance of killing the cat in the next hour, what will be the state of the cat when that time is up? 3. When you think about Einstein and physics, E=mc^2 is probably the first thing that comes to mind. 4. How do you animate a thing like cosmic rays? The story behind a TEDxCERN TED-Ed lesson. 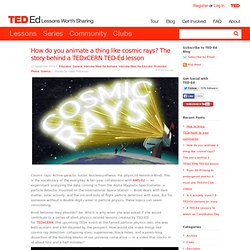 Active galactic nuclei. Nucleosynthesis. For physicist Veronica Bindi, this is the vocabulary of the everyday. A ten-year collaborator with AMS-02 — an experiment analyzing the data coming in from the Alpha Magnetic Spectrometer, a particle detector mounted on the International Space Station — Bindi deals with dark matter, solar activity, and the ins-and-outs of flight particle detectors with ease. But for someone without a double-digit career in particle physics, these topics can seem intimidating. Bindi believes they shouldn’t be. But she was up for the challenge. “Sometimes I’d dream about what I would do if I could have the opportunity to develop my own animation,” she wrote to TEDx. Bindi’s proposal?

Bindi was not alone in tackling these questions. To figure out just how this happened, we spoke with both Bindi and Dickey via email. Veronica, have you ever done something like this before? VB: This is my first animation. VB: I’ve done my best. Particles and waves: The central mystery of quantum mechanics - Chad Orzel. While the story in the video starts around 1900, the question of whether light is a particle or a wave is much older, dating back to the 1600’s. 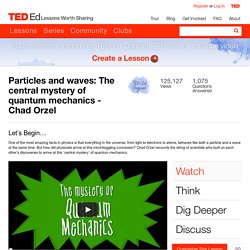 Isaac Newton put forth a particle model of light as a stream of “corpuscles,” while the Dutch physicist Christiaan Huygens preferred a model of light as a wave. The question was thought to have been settled in 1800 by Thomas Young, who provided a definitive demonstration of wave behavior when light encounters a pair of small slits, an experiment.You can see this dramatized in this Veritasium video. You can also simulate the behavior of waves using a large number of Java applets collected here. Give it a try!

Young’s experiments and subsequent work by Jean-Augustin Fresnel convinced everyone that light was a wave, and that consensus held for about a hundred years. The wave model of light started to have problems, though, when Max Planck was trying to explain the spectrum of light emitted by a hot object. What is the Heisenberg Uncertainty Principle? - Chad Orzel. Minute Physics offers a shorter version of the Uncertainty Principle argument with cartoon sheep! 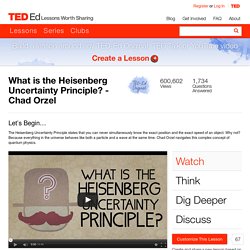 Check it out! The Uncertainty Principle was introduced by Werner Heisenberg in 1927, as part of a long-running project to develop a complete theory of quantum physics. Heisenberg had developed a quantum theory in 1926 built around the idea that only directly measurable quantities should be considered. The uncertainty principle of 1927 was a further elaboration of these ideas; this became one of the pillars of the “Copenhagen Interpretation” of quantum physics, along with Niels Bohr’s Principle of Complementarity. Uncertainty relations show up between many pairs of quantities in quantum physics. While the Uncertainty Principle limits what we can know about the position and momentum of an object simultaneously, in many cases, we only care about one of the two properties, and can improve our knowledge of that quantity at the cost of losing information about the other.