Why we should all embrace the Danish art of 'hygge' - living cosily. Uk.businessinsider. In 2014, the Danish were named as the best speakers of English as a second language in the world. 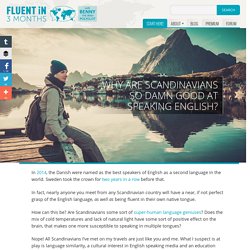 Sweden took the crown for two years in a row before that. In fact, nearly anyone you meet from any Scandinavian country will have a near, if not perfect grasp of the English language, as well as being fluent in their own native tongue. How can this be? Are Scandinavians some sort of super-human language geniuses? Does the mix of cold temperatures and lack of natural light have some sort of positive effect on the brain, that makes one more susceptible to speaking in multiple tongues?

Nope! Let’s examine why it is that Scandinavians have an aptitude for learning English. The Hidden Root Language that Ties English With Scandinavia English and the Scandinavian languages are all considered Germanic languages. English – along with Dutch, German, Yiddish and other languages – is considered part of the West Germanic branch of languages. The public dissection of a zoo’s lion is essential viewing for meat-eaters. Anyone wondering how to entertain children over half-term may be interested to hear about what passes as a fun day out in Denmark. 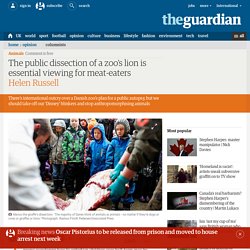 At midday, Odense zoo will dissect a lion as an educational event during the country’s autumn school holiday. And while the rest of the world is up in arms, most Danes don’t see what all the fuss is about. Peter Sandøe, professor of bioethics at the University of Copenhagen and former chairman of the Danish Ethical Council for Animals tells me that public animal dissections aren’t intended to be provocative, but educational. And they’re certainly not uncommon in Denmark, carried out on all kinds of animals: seals, whales, giraffes. “Dissections are an old Danish tradition going back 400 years,” says Sandøe, “and taking a trip to see something like this is a typical thing to do with school-aged children in the holidays – it can open their eyes to the world of science.”

A straw poll of Danish friends confirms this view. Everyone you know will be able to rate you on the terrifying ‘Yelp for people’ — whether you want them to or not. You can already rate restaurants, hotels, movies, college classes, government agencies and bowel movements online. 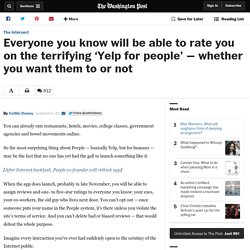 So the most surprising thing about Peeple — basically Yelp, but for humans — may be the fact that no one has yet had the gall to launch something like it. [After Internet backlash, Peeple co-founder will rethink app] When the app does launch, probably in late November, you will be able to assign reviews and one- to five-star ratings to everyone you know: your exes, your co-workers, the old guy who lives next door.

You can’t opt out — once someone puts your name in the Peeple system, it’s there unless you violate the site’s terms of service. And you can’t delete bad or biased reviews — that would defeat the whole purpose. Imagine every interaction you’ve ever had suddenly open to the scrutiny of the Internet public. “People do so much research when they buy a car or make those kinds of decisions,” said Julia Cordray, one of the app’s founders. Boredom is not a problem to be solved. It's the last privilege of a free mind... Confessing to boredom is confessing to a character-flaw. 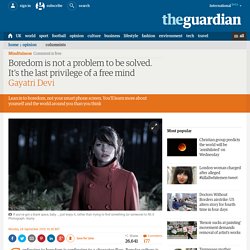 Popular culture is littered with advice on how to shake it off: find like-minded people, take up a hobby, find a cause and work for it, take up an instrument, read a book, clean your house And certainly don’t let your kids be bored: enroll them in swimming, soccer, dance, church groups – anything to keep them from assuaging their boredom by gravitating toward sex and drugs.

To do otherwise is to admit that we’re not engaging with the world around us. Or that your cellphone has died. But boredom is not tragic. Properly understood, boredom helps us understand time, and ourselves. I live and teach in small-town Pennsylvania, and some of my students from bigger cities tell me that they always go home on Fridays because they are bored here. You know the best antidote to boredom, I asked them? When you’re bored, time moves slowly. Don’t replace boredom with work or fun or habits.