College shouldn't be free: Three big problems with free college. Aaron Bady recently did a piece calling for a return to the vision of free public higher education, embracing the slogan that if we're charging these high tuition fees then these "public" institutions aren't really public at all. 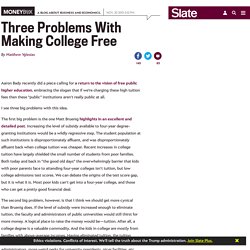 I see three big problems with this idea. The first big problem is the one Matt Bruenig highlights in an excellent and detailed post. Increasing the level of subsidy available to four-year degree-granting institutions would be a wildly regressive step. The student population at such institutions is disproportionately affluent, and was disproportionately affluent back when college tuition was cheaper. Recent increases in college tuition have largely shielded the small number of students from poor families. The second big problem, however, is that I think we should get more cynical than Bruenig does. The third and most fundamental problem is simply that it's hardly as if the university sector is the only branch of education that might plausibly want more money. Should college education be free? If that were the case, it would be High School part 2. 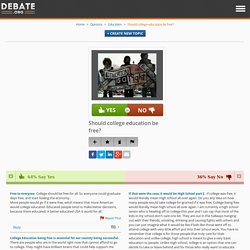 Should Community Colleges Be Tuition-Free? - WSJ. One of the most sweeping proposals in President Barack Obama’s State of the Union address this year was his call to make community college free for millions of students. 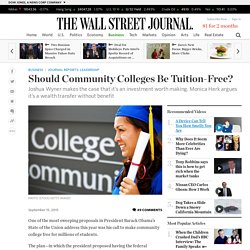 The plan—in which the president proposed having the federal government cover 75% of the cost of tuition and states pay the rest—was aimed at increasing access to college in an era when most good jobs require some postsecondary education and many employers say they struggle to find workers with the skills they need. But at an estimated cost of $60 billion over 10 years, the proposal was controversial and given no chance of advancing in a Republican-controlled Congress. Some argue that free community college would be a huge and costly entitlement with little return on investment.

At about $3,300 a year for full-time study, community-college tuition is already very low, these critics say, so it doesn’t make sense to give subsidies to students for whom affordability isn’t an obstacle. Why Community Colleges Should Be Free. Tennessee does not immediately come to mind as a progressive force in science and technical education. 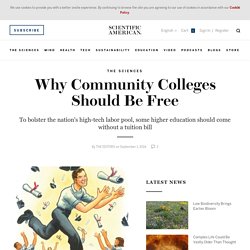 Even today the legacy of the infamous 1925 Scopes trial persists: a relatively new state law invites teachers to criticize mainstream science, be it evolution or global warming. Yet the antediluvian “Monkey Bill,” as opponents call the 2012 legislation, has not prevented the state from taking the national spotlight as an educational innovator. In May, Republican governor Bill Haslam signed a bill that will make Tennessee's two-year community colleges and technical schools free to any high school graduate starting in 2015.

Community colleges are pillars of STEM (science, technology, engineering and mathematics) education. Why Can’t College Be Free? Three proposals to reclaim the promise of higher education. 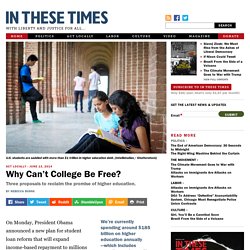 We’re currently spending around $185 billion on higher education annually—which includes spending on for-profit schools, which have very low graduation rates and high debt rates, as well as on merit aid for wealthy students. On Monday, President Obama announced a new plan for student loan reform that will expand income-based repayment to millions of indebted borrowers. Some have criticized the plan for shutting out those saddled with private loan repayments, however, as well as those whose loans date back prior to October 2007. Others have asked a more fundamental question: Instead of reforming student loans, why not eliminate student debt altogether? Free higher education in the United States may sound like a fanciful idea. Some education advocates, however, believe these plans don’t go far enough, and that all public colleges and universities should be free.

Make college free for all. In an op-ed for The Washington Post, Democratic presidential candidate Bernie Sanders explains legislation that would drastically change higher education in America. 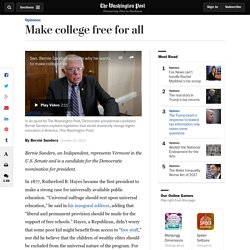 (The Washington Post) In an op-ed for The Washington Post, Democratic presidential candidate Bernie Sanders explains legislation that would drastically change higher education in America. Obama: Community college should be 'as free and universal in America as high school' As expected, President Obama outlined his proposal to offer two years of free community college tuition for students, first detailed two weeks ago in Tennessee. 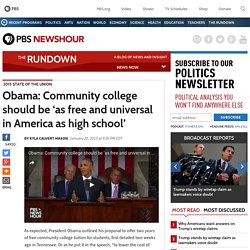 Or as he put it in the speech, “to lower the cost of community college — to zero.” Why Education Should Be Free - Getting Smart by Guest Author - Entrepreneurs, Higher education. By Scott Hines, Co-Founder, President and COO, World Education University For most, the single greatest barrier to accessing higher education is cost. 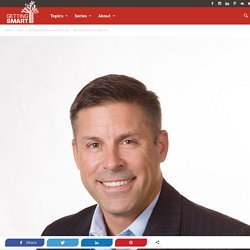 In the last decade, tuition has skyrocketed across the United States. Crippling student loan debt in America has now surpassed a staggering $1 trillion. Many students find the return on investment just isn’t there and they’re walking away from college without graduating, disenfranchised and deeply in debt. The international community is even less likely to attend college, with less than five percent of the world’s population ever achieving post-secondary education of any kind. Last year, I attended a global education conference hosted by Goldman Sachs at Stanford University.

Classism has been around for centuries. But level the playing field for everyone? No wonder the private sector has been reluctant to invest in free education models and the open source movement. Make college free for all. How Strongly Can Social Media Influence and Control People’s Lives? What comes to your mind when you hear the term “Social Media? 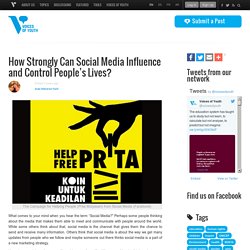 " Perhaps some people thinking about the media that makes them able to meet and communicate with people around the world. While some others think about that, social media is the channel that gives them the chance to send and receive many information. Influence of Social Media on Teenagers. The influence of social media on adolescents and teenagers is of particular importance, not only because this particular group of children is developmentally vulnerable but also because they are among the heaviest users of social networking. 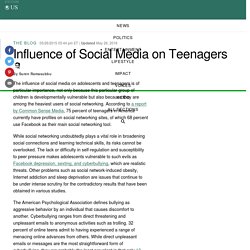 According to a report by Common Sense Media, 75 percent of teenagers in America currently have profiles on social networking sites, of which 68 percent use Facebook as their main social networking tool. While social networking undoubtedly plays a vital role in broadening social connections and learning technical skills, its risks cannot be overlooked. The lack or difficulty in self-regulation and susceptibility to peer pressure makes adolescents vulnerable to such evils as Facebook depression, sexting, and cyberbullying, which are realistic threats.

The American Psychological Association defines bullying as aggressive behavior by an individual that causes discomfort to another. MEDIA INFLUENCE ON THE INTELLIGENCE COMMUNITY. How Social Media Influences People - Infographic. Social media is changing more than the way we communicate. Since the first caveman grunted at his wife once to say he was hungry, and twice to say he was lonely, communication has influenced real world actions. When a society shifts how it is communicating then the flow of real world actions also changes. Influence, a topic I am always talking about, can be about changing minds, but it becomes particularly powerful when it turns into action. People are habitual and if left alone and observed, they can become fairly predictable. Changing habits then becomes very powerful. Social media use may lead to poor grades. Many college students could not imagine a day without updating their Twitter feeds or Facebook statuses, but according to a recent study led by researchers at the Miriam Hospital, using social media may impair academic performance.

The study was published online in the journal Emerging Adulthood last month. Social Media Linked to Poor Academic Performance - Redorbit. April 11, 2013 by editor Peter Suciu for redOrbit.com — Your Universe Online Could texting, tweeting and other use of social media hurt one´s GPA? That´s what researchers from The Miriam Hospital´s Centers for Behavioral and Preventive Medicine sought to discover, and the results are that the widespread use of social media among college students, which includes texting to chatting on mobile phones and even just posting status updates on Facebook, could take an academic toll. According to this new study, many students are engaged nearly half the day in some form of media use. The study found freshmen women were spending nearly 12 hours a day texting, using the Internet for social media networking, or listening to music and watching videos.

The exceptions were reading news online or listening to music, which actually was linked to positive academic performance. How Social Circles Affect Students' Grades. Researchers asked 160 high school students in New York to identify their close friends, regular friends and acquaintances, and then used the data to draw connections between friend circles and students’ grade point averages, attendance and disciplinary actions, according to an article in Education Week. The study, “Spread of Academic Success in a High School Social Network,” used a social network approach to identify the relationships between students and their social circles. The study’s results showed that students were more likely to improve their GPA if they had friends who got good grades.

Students who started with high GPAs who were friends with students with lower GPAs, were likely to see a decrease in their grades. Co-author of the study Hiroki Sayama, said in the article,“Psychologically, it makes sense, because if you are working to improve your grades, subconsciously you might see smarter students as your friends.” An Analysis on the impact of Social Media on College Students Academic Performance. Social Media & Students' Communication Skills. Rusul Alrubail , Edutopia Community Facilitator/ Student Voice & Literacy at The Writing Project Posted 07/14/2015 8:37PM | Last Commented 10/28/2015 1:50PM With social media taking up such a large space in our lives, many of us question whether it’s impacting our communication skills, more importantly, our students’ communication skills.