Be a Better Ally 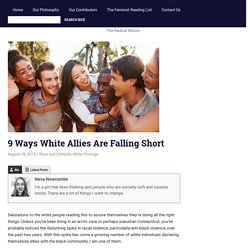 I'm a girl that likes thinking and people who are secretly soft and squishy inside. There are a lot of things I want to change. Salutations to the white people reading this to assure themselves they’re doing all the right things. Unless you’ve been living in an arctic cave or perhaps suburban Connecticut, you’ve probably noticed the disturbing spike in racial violence, particularly anti-black violence, over the past two years. With this spike has come a growing number of white individuals declaring themselves allies with the black community. ‘Ally’ Is Not An Identity. A series of interactions on Facebook and Twitter have left me a bit jaded and cynical when it comes to people who call themselves “allies.” 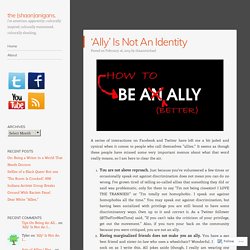 It seems as though these people have missed some very important memos about what that word really means, so I am here to clear the air. You are not above reproach. Dear White Allies, I’m Not Really Interested In Being An Ally With You – Onyx Truth. When I first started this site, the intentions of the site was to basically just let people vent about whatever they felt like venting about in life. 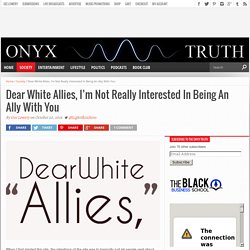 That was pretty much it. Rather quickly the site began to focus primarily on the severe issues facing Black society that primarily dealt with issues concerning racism, white supremacy, & police brutality. Dear white people: Your comfort makes you bad allies - RESIST. Donald Trump won the election, and people of color have been scared about their futures because the president-elect is literally a figurehead of white supremacy. 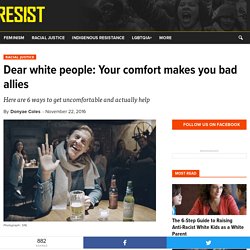 If you are white and not marginalized in some way, chances are that you’re worried, but your future is pretty comfortable. If you want to be a good ally, then it’s time for you to get uncomfortable. Even if you are somehow marginalized (for example, if you are a gay white person), there is still work that you can and should do, so don’t ignore this piece because you think that I’m not talking to you. Your marginalization does not excuse you from doing the work to help dismantle the toxic culture of racism that continues to overrun our country.

Six tips for working in solidarity with Muslim women - RESIST. Every few days, I get an inbox message, e-mail, or in-person question along the lines of “How do you reconcile your Muslim faith with feminism? 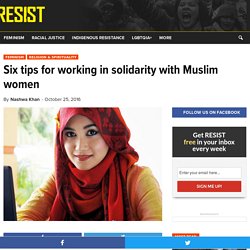 You’re an adamant feminist, but always defend and uphold your Muslim identity. How?” The question can deviate between the fine line of carefully polite and entitled savior. But it’s common for many people to dismiss Muslim women as feminists. This, of course, in and of itself is not a feminist action. As a nonhijabi, people often forget that I’m Muslim until they realize that I’m fasting or find me defending an ignorant Islamaphobic comment. This shock is justified with “But you’re so feminist,” and the juxtaposition of this statement has always puzzled me because I find that Islam and feminism do, indeed, complement each other well.

As I became more comfortable identifying as a feminist, I became closer to my faith and became more public about being a Muslim and heavily involved in social justice. 1. 2. 3. 4. 5. So can any other choice of dress. 6. A guide for straight and cisgender allies in LGBTQIA+ spaces - RESIST. Last year, I was getting ready for a wonderful New Year’s Eve with my friends and chosen family. 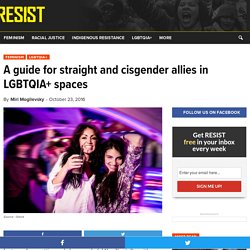 It was a bittersweet night, too, because it was the night our local lesbian nightclub, Wall Street, would be shutting its doors for the last time. Although I wouldn’t be there at its last show because I’d decided to host my own party, I knew I would treasure my memories of it — the burlesque, the drag shows, the drinks, the dancing, and, of course, all my lovely queer friends that I went there with. But that very morning, I heard it — a man’s arrogant voice coming from somewhere in my office building: “I’m definitely going out to Wall Street for New Year’s tonight to look at the freaks!” The freaks? I thought. Most straight cis folks would never say something like that about a LGBTQIA+ space, but I’ve observed similar attitudes playing out in all sorts of small ways throughout the times I’ve spent in these spaces. 1.

If you’re at a gay bar or club, tip well. 2. 3. 4 ways you as a white person can reduce your complicity in white supremacy - RESIST. When people think of white supremacy, they think of Nazis, of white guys with shaved heads and combat boots, or of white men under hoods burning crosses and calling themselves 5th level supreme grand wizard dragons or whatever fantasy nonsense they call themselves. 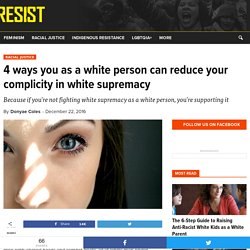 They are part of white supremacy, but they’re not what keeps it alive and well. The complacent attitude of good white people is what really keeps white supremacy going.