Kawiteros to bring Mexico's iconic Huichol art and shamanism to videogames. Despite the native Mexican Huichol culture still basking in its age-old traditions, its community seems to understand how to balance the necessary evils of modern society a whole lot better than the rest of us. 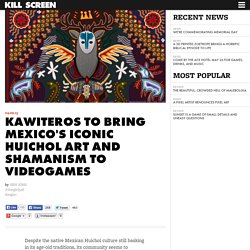 To preserve their heritage and community, decades ago, the Huichol people started selling modified variations of their religious art commercially. By combining commercial materials like colorful beads and yarn with their time-honored skills, the Huichol people create beautiful pieces of folk art that tourists eat up to this day. With this one adaptation, the Huichol people not only gained more economic sufficiency, but also ensured the continued relevance and importance of their culture as a symbol for native Mexican heritage. Aside from jewelry, masks, and yarn paintings, their folk art has even evolved to incorporate t-shirts, boxed note cards, framed art, and downloadable animation.

I guess you don't survive a millennia of adversity without gaining savvy.

The Legend of Zelda 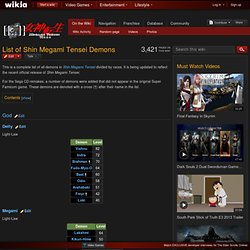 It is being updated to reflect the recent official release of Shin Megami Tensei. For the Sega CD remakes, a number of demons were added that did not appear in the original Super Famicom game. These demons are denoted with a cross (†) after their name in the list. God Edit Deity Edit Light-Law Megami Kishin Tenma Light-Chaos Kishin Vile Dark-Law Femme. Passwords - Fantasy Life Wiki. Passwords (Japanese: あいことば, Ai Kotoba) are event codes that the player can use to obtain rare items that are not easily or cannot be found or obtained through the game. 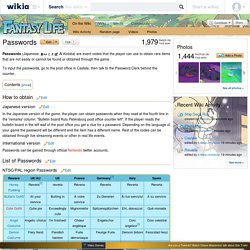 To input the passwords, go to the post office in Castele, then talk to the Password Clerk behind the counter. How to obtain Edit Japanese version. Buy Adventure Time: Hey Ice King! Why'd You Steal Our Garbage?! (Collector's Edition) (Nintendo DS) Browse explore more upcoming releases most viewed items product info D3 Publisher Compatible with Nintendo DS (NDS) Get informed when this item is in stock by using our Personal Agent from the right. save for later This item is currently unavailable. 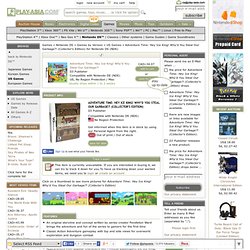 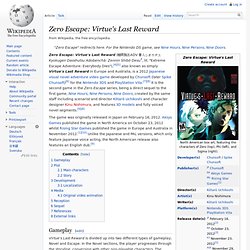 , lit. "Extreme Escape Adventure: Everybody Dies"),[4][5] also known as simply Virtue's Last Reward in Europe and Australia, is a 2012 Japanese visual novel adventure video game developed by Chunsoft (later Spike Chunsoft)[6] for the Nintendo 3DS and PlayStation Vita.[7][8] It is the second game in the Zero Escape series, being a direct sequel to the first game, Nine Hours, Nine Persons, Nine Doors, created by the same staff including scenarist and director Kōtarō Uchikoshi and character designer Kinu Nishimura, and features 3D models and fully voiced novel segments.[9][8] The game was originally released in Japan on February 16, 2012.

Gameplay[edit] Virtue's Last Reward is divided up into two different types of gameplay; Novel and Escape. Plot[edit] Main characters[edit] Colossi - Shadow Of The Colossus Wiki. Toriko: Gourmet Monsters - Toriko Wiki. Club Nintendo - Logged In - Nintendo. Kotaku, the Gamer’s Guide. Amazon.co.uk Video Games: Pre-order Promotion Centre. User blog:Soldierscuzzy/The 25 Best Games You May Have Missed in 2011 - Wikia Gaming. 2011 was an amazing year for the video games industry, not only with big blockbuster titles and record numbers of sales, but also with less-publicized or independent games getting the critical acclaim they deserve. 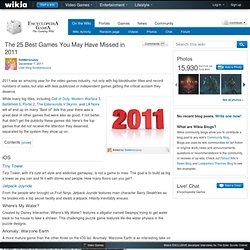 While many big titles, including Call of Duty: Modern Warfare 3, Battlefield 3, Portal 2, The Elderscrolls V:Skyrim, and LA Noire will all end up on many "Best of" lists this year there was a great deal of other games that were also as good, if not better, that didn't get the publicity these games did. Here's the top games that did not recieve the attention they deserved, separated by the system they show up on. iOS Tiny Tower Tiny Tower, with it's cute art style and addictive gameplay, is not a game to miss. Jetpack Joyride From the people who brought us Fruit Ninja, Jetpack Joyride features main character Barry Steakfries as he breaks into a top secret facility and steals a jetpack. Europe. Sanshee.com. See you in The Forest!