Ami-El, the Horn Knife. A text for Province: Cyrodiil, a project focused on the recreation of the Imperial Province for TES III: Morrowind, as it was described in the PGE I. 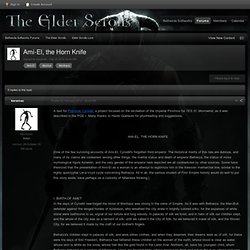 Many thanks to Haute Qûeteure for proofreading and suggestions. Anuic Procession aka Unified Trans-Phenomenal magic theory. (It's 2 AM and I'm drunk. 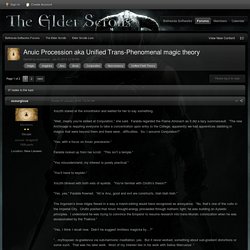 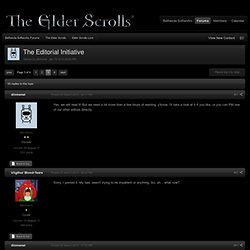 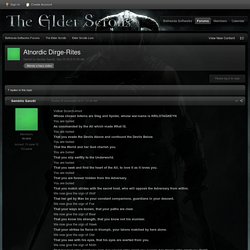 You are buriedThat you are forever hidden from the Adversary.You are buriedThat you match strides with the secret host, who will oppose the Adversary from within.We now give the sign of WolfThat her get by Man be your constant companions, guardians in your descent. We now give the sign of FoxThat your ways are known, that your paths are clear. Belharzarita. Book I: Belharza the Child In those days, of course, it was uncommon among the Nedic tribesmen for a male to achieve any notoriety out of the arena of combat. 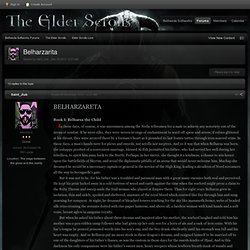 If he wore silks, they were woven in rings of enchantment to ward off spear and arrow; if rubies glittered at his throat, they were arrayed there by a foeman’s heart as it pounded its last frantic tattoo through iron-scarred veins. In those days, a man's hands were for plows and swords, not scrolls nor sceptres. And so it was that when Belharza was born, the unhappy product of a convenient marriage, blessed Al-Esh permitted his father, who had served her well during her rebellion, to spirit him away back to the North. The Chandler. (2/19/12) Commentary: As of today, this is finished (except for the little bitty epilogue), so I thought I might write a bit about what I was trying to do here. 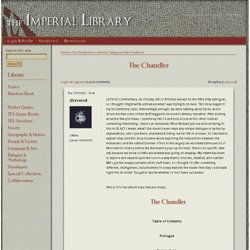 This story began in my biochemistry class, interestingly enough; we were talking about lipids, and it struck me that some of that stuff begged to be used in fantasy narrative. After kicking around a few plot ideas, I opened up the CS and took a look at Vos. And I noticed something interesting - there's an Ashlander Wise Woman just out and out living in Vos in 3E 427. I mean, what? She doesn't even have any unique dialogue or by the by explanations, she's just there, unashamed, living out her life in a house. And so it is my utmost hope that you enjoy, A Coded Letter to the College of Winterhold. Onmund, Thank you for your latest report. 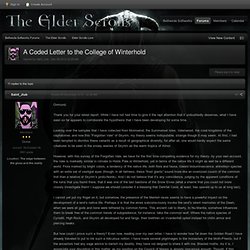 While I have not had time to give it the rapt attention that it undoubtedly deserves, what I have seen so far appears to corroborate the hypothesis that I have been developing for some time. Collected Cyrodiilic extracts. A Counter-Blaste to Perfidy. A Counter-Blaste to Perfidy, or, an Exposure of the Manifold Iniquities Visited Upon Morrowind by That Most Vile and Incorrigible PACT of EBONHEART By Sevilo Menas, Proud Dunmer of Morrowind defiant s’wit misturned from his nymics anathema to his ancestors Printed ▇▇ █▇▇▇▇▇ █▇▇▇▇▇ ▇▇▇ █▇▇▇▇▇ 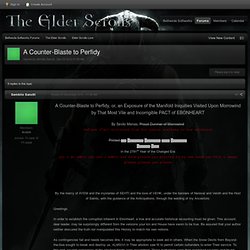 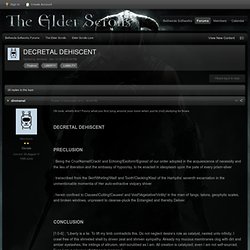 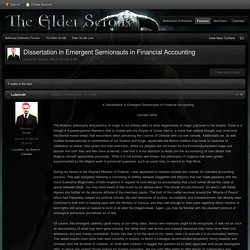 There is a thread of Superempericist Mannism that is shared with the Empire of Cyrod, that is, a moral that rational thought may overcome the mental mortal stress that encumbers when perceiving the cosmos of Oblivion with our own senses. Additionally we, as well studied bureaumancers in represention of our Queens and Kings, appreciate the Merish tradition that lends to centuries of meditation on words, their power and their execution. While my peoples are not known for the Exomundustentialist leaps and bounds that both Man and Mer have achieved, I feel that it is our attention to detail and the accountancy of said details that Magnus himself appreciates personally. Dominion Tendrilite 6th Shell Congress, De Rerum: Descent of Nu-Mannoid.

The Great Thalmor concludes perfectly. Indeed, The Count Arkmont kept her sequestered in the private hidden suite of his Alcaire-upon-Alcaire manorhouse, able to be entered only from concealed backdoor, wherein through keyhole occulance Mantis peepspied the Count’s rapturous spelyngological explorations of Ysigný’s own subtle apertures every evening before supper with his wife, the Countess, and their three legitimate sons – Eustache, Gaufre, and Ecureuilbleu.

Despite her rude genesis, she was naïve and unplastic in the techniques and rigors of spastic pollination and had to be chained down by eunuchs to prevent her from kicking, feeding further into the Count’s bespoken fancies. When her stomach swelled - which Ysigný reasoned, with practiced daftreckoning, had come from all those deep mouth-tickling tongue kisses that her seigneur liked to perform on her – The Countess for fear of her adroit and salic sons, stamped her feet and demanded maractomy before term. The Dragon and the Tree. Hello everybody. I am not used to writing fan-fictions, especially in English... but here is a first short try. The Dragon and the Tree A comparative study of the Zul and the Jel By Einarth the Tongue, Archimagister of the College of the Voice in Markarth In order to sharpen and reinforce the vocal arsenal of His Red Legions, as well as to ensure, should a new Knahaten spread, that the Argonia would not be immune to our weapons, His Most Discerning Majesty the Emperor Tiber Septim commissioned some leading experts in linguistic engineering to study the notoriously abstruse Jel.

Fortunately, we can benefit from previous attempts at this linguistic exploration. Dwemer Alloy is made of... Pshaw, the Betrayed were worthy only of being put to work mining soul gems and Aetherium and having their souls harvested to be put to use in the soul matrices of animunculi. Ahem. Dwemer Zero. Dear Dinmenel, I was doing some spring cleaning the other day (what piles of junk build up when one is scrambling through dungeons for the better part of a year!)

, and found this spore-record buried in a honeypot under the bed. I recognized it immediately as a transcript from one of my guest-lectures with Gwylim's Dwemer Studies Department and thought it might perhaps be of interest to your research into the fate of Nirn's most interesting race. Official Spore Transcript. Evocatio sancrea aad concilium chorrollinium. Oh to heck with it... Oyez Oyez Oyez, Beloved Brothers and Sisters in the Nine, if you will all cease your private conversations take your seats we may begin. Ahem, for those of you whom I have not had the opportunity to meet personally, I am Belharzslav Olodiil, Primate of the Heroon of Reman Autochthonicus , Chaplain-General of Red Legion, Elder-Councilor, and former Archimandrite-Palatine to our late, most beloved Imperator Et Tourifex Maximus, Uriel VII, soon we shall cut our wine together in Aetherius, Dear Brother. …But I now have the great pleasure of serving as Arbiter of this, The Second Ecumundrial Council of Chorrol.

This most distinguished Gentlemer to my right is Shurz Gro-Gortwog, Crown Prince of Orsinium, Imperial Legate of Red Legion, Knight-Brother of The Order of the Lily, Blade-Seneschal, and a dear friend. At my request, he has graciously agreed to serve as our Deacon-Bumbailiff . Deacon-Bumbailiff, please have your men secure all portals mundane or otherwise.

The Epithalamium of Arimatha. Excerpt from an early 4e alchemical thesis (Firsthold, Alinor) Dear author (Muertitanieou) , It is with regret that this reviewer writes to inform you that the Council cannot accept your thesis for publication at this time. Excerpt from 'On the Camorans' by Amiel Arbutus. Excerpt from Penitus Oculatus brief, sent c. 4E418. While they’re not as obviously hostile as agents or assassins, the Thalmor’s ambassadors are infinitely more dangerous. Excerpts: On Alinor. Herein lie some lore-excerpts from a piece I've been working on. A Floater's Encyclopaedia of Some Feelings of Some Creatures of Tamriel. The Guardians. The Hammer of Olfor. Hjalti Eats a Horker: a Tale of Tiber Septim. Hjalti Eats a Horker. Hag Tales of Crag'Cwmlech. The History of Card Games.

On Silk. On the True Nature of Zenithar. On Venatical Practices in the Empire. Oracle Bone Transcription. Pentannual Census of the Houses of Morrowind, Post Red-Year 4E 166. A primo lacerta. PROGRESS REPORT: In Pursuit of Diapause Deletion. Protocollum Ecs Concillium Chorrolinium. Raid on Pyandonea. A Response. Ruminations on the Nature of the Et'Ada - A Fragment. Staring at the Summerstrand.

The Warped West - Hiaûŗoche. Winterhold Forthrow Headway-Bewrit. Wolf-Heart: A Tale of [a] Dragonborn. You’ll Build a Fine Shrine in Me: A Bosmeri Ritual, or; How We Lost the War. The Zero-Sum Of Zhiro.