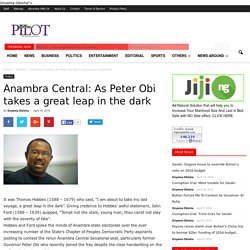 Giving credence to Hobbes’ awful statement, John Ford (1586 – 1639) quipped, “Tempt not the stars, young man, thou canst not play with the severity of fate”. Hobbes and Ford spoke the minds of Anambra state electorate over the ever increasing number of the State’s Chapter of Peoples Democratic Party aspirants jostling to contest the rerun Anambra Central Senatorial seat, particularly former Governor Peter Obi who recently joined the fray despite the clear handwriting on the wall – mission impossible. It has been the practice in the Anambra State Chapter of Peoples Democratic Party to field multiple candidates in all elections from different factions and allow the court to determine the authentic candidates.

Obioha, a public affairs analyst sent this piece from Lagos. Ondo 2016: Battle for Alagbaka Government House - Nigerian News on the go from Nigerian Pilot Newspaper. Ahead of the November 26 governorship election in Ondo state, the political temperature of the state is getting to a feverish level as political gladiators and their grassroots mobilizers are working round the clock to ensure that their candidate picks the ticket of the party. 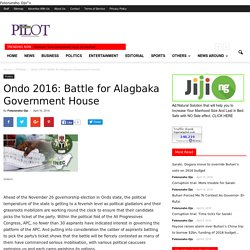 Within the political fold of the All Progressives Congress, APC, no fewer than 30 aspirants have indicated interest in governing the platform of the APC. And putting into consideration the caliber of aspirants battling to pick the party’s ticket shows that the battle will be fiercely contested as many of them have commenced serious mobilisation, with various political caucuses springing up and each camp weighing its options. Ada to organise beauty pageant for psychiatric patients - Nigerian News on the go from Nigerian Pilot Newspaper.

Controversial Accra based Nigerian radio presenter, Adaeze Onyinyechie Ayoka, also known as Ada, has disclosed that she is planning to host a beauty pageant for patients of the Accra Psychiatric Hospital. 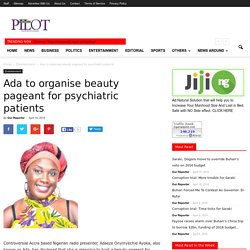 Making the revelation on Hitz FM’s Showbiz Filla with Amanda Jissih, Ada said, “it’s about time people paid attention to people who are mentally ill; they are logical, they just see things differently. Even in that state, [they] can still do positive things.” Majek Fashek freestyles during dinner with ex-backup singer - Nigerian News on the go from Nigerian Pilot Newspaper. 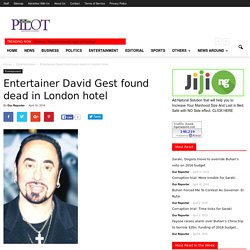 Gest, who is a former husband of singer Liza Minnelli, died at the Four Seasons hotel in Canary Wharf. His friend and former bodyguard Imad Handi confirmed the news in a statement. “It is with great sadness that I can confirm that David Gest has died today,” the statement read. At last! Eaglets get world cup bonus, allowances - Nigerian News on the go from Nigerian Pilot Newspaper. Five months after they won the FIFA U17 World Cup in Chile, the Golden Eaglets can now heave a huge sigh of relief after they were paid their outstanding bonuses and allowances this week. 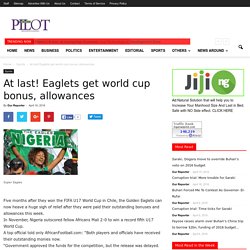 In November, Nigeria outscored fellow Africans Mali 2-0 to win a record fifth U17 World Cup. A top official told only AfricanFootball.com: “Both players and officials have received their outstanding monies now. For DSP Alamieyeseigha (1952-2015) - Nigerian News on the go from Nigerian Pilot Newspaper. The death of Chief Diepreye Solomon Peter Alamieyeseigha, otherwise known as Alams came as a rude shock to all and sundry. 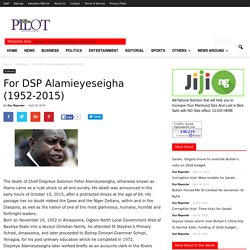 His death was announced in the early hours of October 15, 2015, after a protracted illness at the age of 64. His passage has no doubt robbed the Ijaws and the Niger Deltans, within and in the Diaspora, as well as the nation of one of the most glamorous, humane, humble and forthright leaders. Born on November 16, 1952 in Amassoma, Ogboin North Local Government Area of Bayelsa State into a devout Christian family, he attended St Stephen’s Primary School, Amassoma, and later proceeded to Bishop Dimeari Grammer School, Yenagoa, for his post-primary education which he completed in 1972.

Nigerian News on the go from Nigerian Pilot Newspaper. Atta Igala and president of Kogi State Council of Chiefs, His Royal Majesty Idakwo Micheal Ameh-Oboni 11 has appealed to the Echeno community in Ibaji local government area and Aguleri people in Anambra State to sheath their swords over lingering oil well crisis in the Anambra River Basin, saying that during his reign such crisis would not be allowed to flourish. 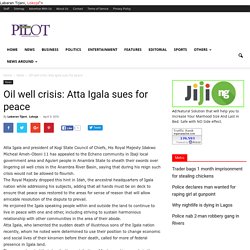 The Royal Majesty dropped this hint in Idah, the ancestral headquarters of Igala nation while addressing his subjects, adding that all hands must be on deck to ensure that peace was restored to the areas for sense of reason that will allow amicable resolution of the dispute to prevail. He enjoined the Igala speaking people within and outside the land to continue to live in peace with one and other, including striving to sustain harmonious relationship with other communities in the area of their abode.

Company commences cashew juice processing in Kogi « Nigerian News on the go from Nigerian Pilot Newspaper. Food processing company, under the aegis of Ahiaba Global Resources Limited, in collaboration with a U.S-based Techno Serve has commenced production of cashew juice from cashew apples in Kogi state. 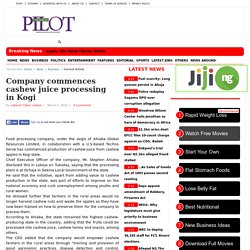 Chief Executive Officer of the company, Mr. Stephen Ahiaba disclosed this in Lokoja on Tuesday, saying that the processing plant is at Ochaja in Dekina Local Government of the state. He said that the initiative, apart from adding value to cashew production in the state, was part of efforts to improve on the national economy and curb unemployment among youths and rural women. He stressed further that farmers in the rural areas would no longer harvest cashew nuts and waste the apples as they have now been trained on how to preserve them for the company to process them.

NAME CULPRITS OF GHOST WORKERS SYNDROME « Nigerian News on the go from Nigerian Pilot Newspaper. Shock and disbelief summed up the recent revelation by the Minister of Finance, Mrs. 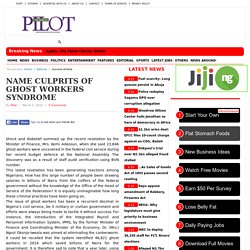 Kemi Adeosun, when she said 23,846 ghost workers were uncovered in the federal civil service during her recent budget defence at the National Assembly. The discovery was as a result of staff audit verification using BVN number. This latest revelation has been generating reactions among Nigerians. No secrecy in NASS budget — Senator Oko « Nigerian News on the go from Nigerian Pilot Newspaper. …Laments emphasis on legislative expenses SENATOR Rose Oko (PDP Cross River North) yesterday said the National Assembly budget was not only open but accessible to all contrary to claims in some quarters that the budget is being shrouded in secrecy. 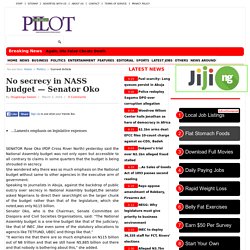 N5, 000 stipends: Did APC obtain votes by trick? « Nigerian News on the go from Nigerian Pilot Newspaper. Recent decision by President Muhammadu Buhari to renege on the campaign promise of the APC to pay monthly stipend of N5, 000 to vulnerable Nigerians is negatively impacting on the public perception of the party, writes MIKE ODIAKOSE. President Muhammadu Buhari has finally dashed the expectation of huge population of poor Nigerians that the All Progressives Congress, APC, administration will pay monthly stipend to 25 million most vulnerable Nigerians as promised by the party during the 2015 electioneering campaign.

The Nigerian leaders made the unexpected pronouncement, as usual, from outside the country in the Middle East when he said he would rather invest in infrastructure than share that amount monthly to vulnerable Nigerians. He said: “This largesse N5,000 for the unemployed, I have got a slightly different priority. Samsung pre-registration for Galaxy S7, S7 edge opens in Nigeria « Nigerian News on the go from Nigerian Pilot Newspaper. Samsung Electronics West Africa has announced that its latest flagship phones in its long line of Galaxy devices will be available for pre-registration in Nigeria from this month. The smartphones on offer are the alluring Galaxy S7 and S7 Edge available in 32GB with expandable memory slot of 200 GB. Director of Information Technology and Mobile, Samsung, Emmanouil Revmatas, said that Galaxy S7 and Galaxy S7 Edge represent the new galaxy of unlimited possibilities.

“Samsung did not just redefine these devices but also re-imagined what they could do based on the feedback from the people who use them, and what they need most from the devices. NCC charges new media on Cybercrime Act « Nigerian News on the go from Nigerian Pilot Newspaper. Nigerian Communications Commission, NCC, has charged new media to acquaint themselves with the contents of the Act in order to be properly guided in their cyber operations. Addressing a youthful population who mostly live their life in the cyber ecosystem, the Executive Vice Chairman of the NCC, Prof. Umar Garba Danbatta observed that the Cybercrime Act has become law since May last year, noting that it was therefore imperative for New Media practitioners to familiarise themselves with the contents of the law as it affects their practice. In a statement issued yesterday, it said that the NCC boss who Spoke through Mr Tony Ojobo, Director, Public Affairs, Pointing to various sections of the Act, he explained that the Act does not encumber freedom of expression as erroneously believed but instead it seeks to protect those whose freedom may be damaged by the freedom freely expressed by others.

Leave a Comment on the News Comments Have something to add to this story? NSCDC uses new tech. to monitor mining sites, pipelines vandals « Nigerian News on the go from Nigerian Pilot Newspaper. Commandant General of the Nigeria Security and Civil Defence Corps, NSCDC, Abdullahi Gana Muhammadu has hinted that the Corps is applying new information technologies in the monitoring and protection of mining sites and petroleum pipelines against illegal operators and vandals. INEC to deploy 36,335 staff for FCT, Rivers’ elections « Nigerian News on the go from Nigerian Pilot Newspaper. Independent National Electoral Commission, INEC, will deploy a total of 36, 335 permanent and ad-hoc staff for the conduct of the Federal Capital Territory Chairmanship and Area Council Elections, and the Rivers state re-run elections, both scheduled for Saturday 19thMarch, 2016.

Players and officials of Akwa United FC were left stunned after Vita Club Mokanda defeated them 6-5 on penalties to end the Uyo-based side’s first ever continental appearance on a sour note. The visiting Congolese side won 1-0 on the night to cancel out a similar scoreless recorded by Akwa United in Pointe Noire a fortnight ago. Clerics express divergent views on Govt sponsorship of pilgrimage « Nigerian News on the go from Nigerian Pilot Newspaper.