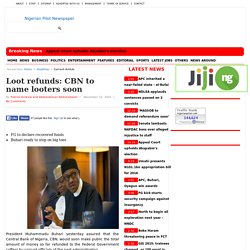 GIS 2015: trainees charged, as 100 enrol in Enugu. Graduate Internship Scheme, GIS, trainees from Rivers State have been urged to use the skills they gained during the scheme to continue to build and develop themselves and the nation at large. 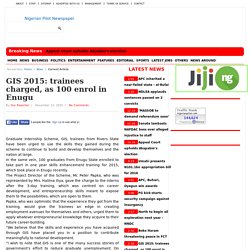 In the same vein, 100 graduates from Enugu State enrolled to take part in one year skills enhancement training for 2015, which took place in Enugu recently. The Project Director of the Scheme, Mr. Peter Papka, who was represented by Mrs. Boko Haram threatening peace in FCT. Three weeks ago, when the Department of State Services, DSS, alerted Abuja residents over plots by Boko Haram to attack churches, mosques and markets, using female suicide bombers, mostly young girls, it became obvious that there will be panic across the city. 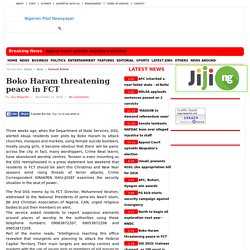 In fact, many worshippers, Crime Beat learnt, have abandoned worship centres. Tension is even mounting as the DSS reemphasised in a press statement last weekend that residents in FCT should be alert this Christmas and New Year seasons amid rising threats of terror attacks. Crime Correspondent IORAKPEN ISHU-JOSEF examines the security situation in the seat of power.. North to begin oil exploration next year – NNDC. New Nigeria Development Company, NNDC, a business conglomerate of the 19 northern state governments has disclosed plans to commence exploration of oil and gas in the Lake Chad area of North-East. 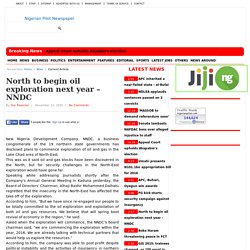 This was as it said oil and gas blocks have been discovered in the North, but for security challenges in the North-East exploration would have gone far. Speaking while addressing Journalists shortly after the Company’s Annual General Meeting in Kaduna yesterday, the Board of Directors’ Chairman, Alhaji Bashir Mohammed Dalhatu regretted that the insecurity in the North-East has affected the take off of the exploration. According to him, “But we have since re-engaged our people to be totally committed to the oil exploration and exploitation of both oil and gas resources. We believe that will spring boot revival of economy in the region,” he said. 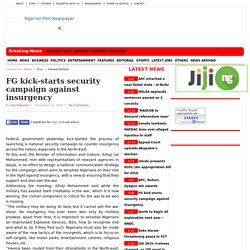 To this end, the Minister of Information and Culture, Alhaji Lai Mohammed, met with representatives of relevant agencies in Abuja, in an effort to design a national communication strategy for the campaign, which aims to sensitise Nigerians on their role in the fight against insurgency, with a view to ensuring that they support and also own the war. Addressing the meeting, Alhaji Mohammed said while the military has availed itself creditably in the war, which it is now winning, the civilian component is critical for the war to be won is missing. ‘’The military may be doing its best, but it cannot win the war alone. No insurgency has ever been won only by military prowess. APC, Buhari, Oyegun win awards. President Muhammadu Buhari and Chief John Oyegun, the National Chairman, have been named joint winners of Verbatim Magazine’s Man of the Year 2015. 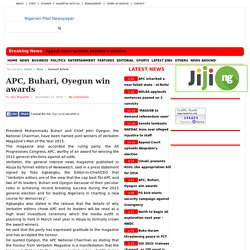 The magazine also accorded the ruling party, the All Progressives Congress, APC, worthy of an award for winning the 2015 general elections against all odds. Verbatim, the general interest news magazine published in Abuja by former editors of Newswatch, said in a press statement signed by Tobs Agbaegbu, the Editor-in-Chief/CEO that ‘’Verbatim editors are of the view that the cap best fits APC and two of its leaders, Buhari and Oyegun because of their peculiar roles in achieving record breaking success during the 2015 general election and for leading Nigerians in charting a new course for democracy’’. Leave a Comment on the News Comments. Umahi presents N101.1bn appropriation bill for 2016. Governor David Umahi of Ebonyi State Friday presented to the state House of Assembly appropriation bill of one hundred and one billion, one hundred and fifty four million, six hundred and forty six thousand thirty naira, N101.1 billion, only for 2016 fiscal year. 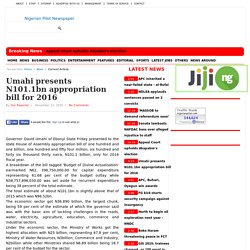 A breakdown of the bill tagged ‘Budget of Divine Actualisation’ earmarked N62, 396,750,000.00 for capital expenditure representing 61.68 per cent of the budget outlay while N38,757,896,030.00 was set aside for recurrent expenditure being 38 percent of the total estimate. The total estimate of about N101.1bn is slightly above that of 2015 which was N96.52bn. The economic sector got N36.890 billion, the largest chunk, being 59 per cent of the estimate of which the governor said was with the basic aim of tackling challenges in the roads, water, electricity, agriculture, education, commerce and industrial sectors. Leave a Comment on the News Comments. Appeal Court upholds Akapabio’s election. The court of appeal Abuja Division yesterday upheld the election of the Senate Minority Leader Chief GodswillAkpabio as senator representing AkwaIbom North-West Senatorial District of Akwa Ibom State. 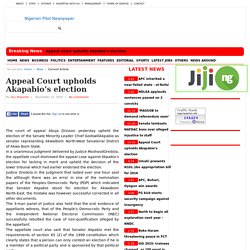 In a unanimous judgment delivered by Justice MoshoodOredola, the appellate court dismissed the appeal case against Akpabio’s election for lacking in merit and upheld the decision of the lower tribunal which had earlier endorsed the election. Senate lambasts NAFDAC boss over alleged injustice to staff. Senate on Thursday lambasted the Director General, National Agency for Food, Drug Administration and Control, NAFDAC, Dr. 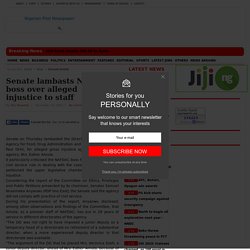 Paul Orhii, for alleged gross injustice against a staff of the agency, Mrs. Esther Amuta. ‘MASSOB to demand referendum soon’ Leadership of the Movement for the Actualisation of Sovereign State of Biafra, MASSOB, loyal to Comrade Uchenna Madu said they are at the verge of demanding for referendum for the sovereign state of Biafra. 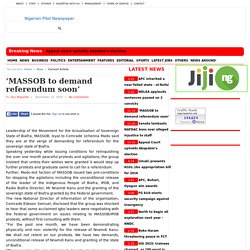 Speaking yesterday while issuing conditions for relinquishing the over one month peaceful protests and agitations, the group insisted that unless their wishes were granted it would step up further protests and graduate same to call for a referendum. NMDC trains 40 graduates on foundry practice. Director General, National Metallurgical Development Centre, NMDC, Prof. Ibrahim Madugu, says the agency has trained over 40 graduates under the foundry practice programme for youth empowerment of the Small and Medium Scale Enterprises Development Agency of Nigeria, SMEDAN. Prof Madugu who stated this recently in Jos, Plateau State, said the programme was tagged, “Training Young Men who are Job Seekers in Foundry Practice,” and lasted for one week said the programme focused on material selection, melting and casting, and also put participants through the rudiments of foundry processing.

Madugu said, “The boys were involved in melting and casting, they also went through all the various rudiments of foundry processing, including how they could build the foundry plant and what are the essence of the foundry plant, and they were all taught that here. “For the North Central, we had 38 able young men and two young women; these are with qualification of National Diplomas. Comments. Amosun harps on agro-forestry economy for Nigerian. Governor Ibikunle Amosun of Ogun state has explain that for the nation to overcome the present economic challenges, a return to agro-forestry as an effective means of lifting the country’s economic doldrums. He said, “The way to go if we really want to come out of the economic crisis is through agro-forestry.

It will save our environment and provide jobs for our people. If we are going to get it right as a nation, we need to diversify our economy. We are blessed with natural and human resources and the best way to diversify is via agriculture that will lead us to industrialisation.” SMEDAN key to economic devt, says DG. Director General, Small and Medium Enterprises Development Agency of Nigeria, SMEDAN, Alhaji Bature Masari, has explained that the agency plays an important role in the economic development of the nation. He said that the agency contributes in no small measure in creating jobs, growth support to other sectors of the economy, which contributes significantly to improving the living standards and local capital formation, thereby “encouraging innovation and competitions in developing economies.”

Masari who stated this while delivering a lecture entitled, ‘Leveraging Finance for Sustainable Development of MSMEs in Nigeria’ at a two-day Small Medium Scale, SME and Franchising Conference organised by Informa Life Science Exhibitions, in Lagos, stressed the commitment of the federal government to promote the growth of Micro Small Medium Enterprises, MSMEs in the country. Leave a Comment on the News Comments. Nasarawa Microfinance Bank records N24bn profit. Telecoms sector to create 6.1m Jobs by 2020, says Shittu. Minister of Communications Technology, Mr Adebayo Shittu, said investment in the mobile telecoms industry would hit $166billion and create over 6.1 million jobs by year 2020.

Mr Shittu who stated this recently in Abuja while declaring open the” 2015 Emerge Tech Summit” said, the mobile industry employed two million people directly as at last year, noting that by 2020 an additional 700, 000 jobs would be generated by the sector. Group slams Governor Abubakar over EFCC invitation. Aisha Buhari: Nudging APC to fulfill campaign promises. Assessing the gains of 3rd Summit of India-Africa Forum. Over 40 African leaders, including Nigeria’s President Muhammadu Buhari, as well as professionals, entrepreneurs and industrialists from Africa and India recently converged on New Delhi for the Third Summit of India-Africa Forum. The four-day summit, which was held between Oct. 26 and Oct. 30, was convened to deliberate on how best to tackle Africa’s development challenges, including terrorism, poverty and dwindling economic fortunes.