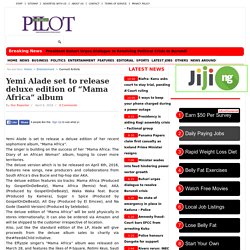 The singer is building on the success of her “Mama Africa: The Diary of an African Woman” album, hoping to cover more territories. The deluxe version which is to be released on April 6th, 2016, features new songs, new producers and collaborations from South Africa’s diva Bucie and hip-hop star AKA. The deluxe edition features six tracks: Mama Africa (Produced by GospelOnDeBeatz), Mama Africa (Remix) feat.

Time to re-position the manufacturing sector 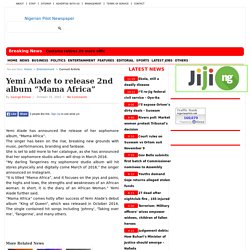 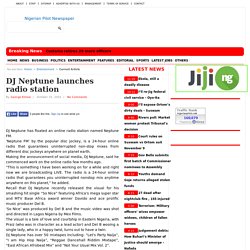 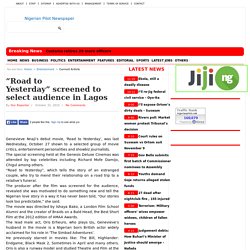 The special screening held at the Genesis Deluxe Cinemas was attended by top celebrities including Richard Mofe Damijo, Chigul among others. “Road to Yesterday”, which tells the story of an estranged couple, who try to mend their relationship on a road trip to a relative’s funeral. The producer after the film was screened for the audience, revealed she was motivated to do something new and tell the Nigerian love story in a way it has never been told, “Our stories look too predictable,” she said.

The movie was directed by Ishaya Bako, a London Film School Alumni and the creator of Braids on a Bald Head, the Best Short Film at the 2012 edition of AMAA Awards. Save our roads from traffic crashes, The anguish of travelling on our roads is better imagined. 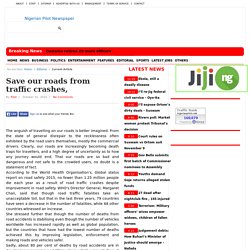 From the state of general disrepair to the recklessness often exhibited by the road users themselves, mostly the commercial drivers. Clearly, our roads are increasingly becoming death traps for travellers, and a high degree of uncertainty as to how any journey would end. That our roads are so bad and dangerous and not safe to the crowded users, no doubt is a statement of fact. According to the World Health Organisation’s, Global status report on road safety 2015, no fewer than 1.25 million people die each year as a result of road traffic crashes despite improvement in road safety.

TP Mazembe dares USM Alger in CAF Champions League final. Former chairman of the Nigeria Football Association, NFA, Brigadier General Dominic Oneya (rtd) will be the match commissioner in today’s CAF Champions League final first- leg clash between TP Mazembe from the Democratic Republic of Congo and USM Alger scheduled for Bologhine, Algeria USM Alger are yet to win the continental trophy, the DR Congo outfit, TP Mazembe would be seeking a fifth African glory since their back-to-back triumphs in 2009 and 2010. 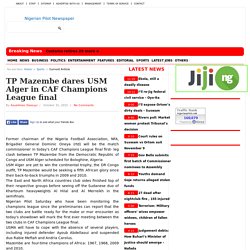 The East and North Africa countries club sides finished top of their respective groups before seeing off the Sudanese duo of Khartoum heavyweights Al Hilal and Al Merreikh in the semifinals. NFF drops code of conduct. As NSC grills Pinnick, Sanusi Nigeria Football Federation, NFF, is set to soft pedal on some hard stands being taken against Super Eagles players including introduction of code of conduct, following the wave of retirement by some senior members of the squad. 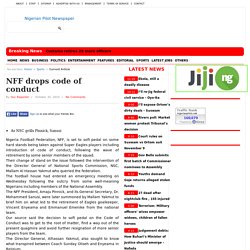 Their change of stand on the issue followed the intervention of the Director General of National Sports Commission, NSC, Mallam Al Hassan Yakmut who queried the federation. The football house had entered an emergency meeting on Wednesday following the outcry from some well-meaning Nigerians including members of the National Assembly. The NFF President, Amaju Pinnick, and its General Secretary, Dr. Enyimba, Warriors clash in Abia ‘El Classico’ Local rivals Enyimba and Abia Warriors will slug it out tomorrow ‘s Abia El-Classico” with both hoping for the points to consolidate their ambitions. 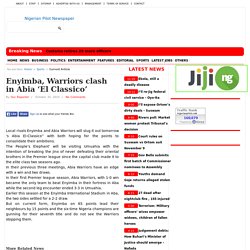 The People’s Elephant’ will be visiting Umuahia with the intention of breaking the jinx of never defeating their oriental brothers in the Premier league since the capital club made it to the elite class two seasons ago. In their previous three meetings, Abia Warriors have an edge with a win and two draws. In their first Premier league season, Abia Warriors, with 1-0 win became the only team to beat Enyimba in their fortress in Aba while the second leg encounter ended 3-3 in Umuahia. Chelsea vs Liverpool: IT’S WIN OR BURST FOR MOURINHO.

Liverpool have lost once in five visits to Stamford Bridge Super Eagles defensive midfielder, John Mikel Obi and his colleagues in Chelsea are set to turnaround the stuttering defence of their Barclays Premier League title this season and the visit of Liverpool today. 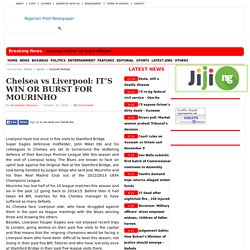 The Blues are known to face an uphill task against the Original Red at the Stamford Bridge, are now being handled by Jurgan Klopp who sent Jose Mourinho and his then Real Madrid Club out of the 2012/2013 UEFA Champions League. Mourinho has lost half of his 10 league matches this season and six in the past 12 going back to 2014/15.

U17 WORLD CUP: EAGLETS SET TO DUMP BRAZIL. World’s U-17 football champions, the Golden Eaglets of Nigeria ranked number one will tomorrow battle the world’s second best, Brazil in the quarterfinals of the ongoing 2015 FIFA U17 World Cup in Chile. 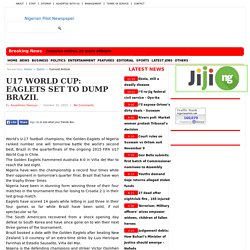 The Golden Eaglets hammered Australia 6-0 in Viña del Mar to reach the last eight. Nigeria have won the championship a record four times while their opponent in tomorrow’s quarter final, Brazil that have won the trophy three- times Nigeria have been in stunning form winning three of their four matches in the tournament thus far losing to Croatia 2-1 in their last group match. Eaglets have scored 14 goals while letting in just three in their four games so far while Brazil have been solid, if not spectacular so far. The South Americans recovered from a shock opening day defeat to South Korea and have since gone on to win their next three games of the tournament.

India summit: Africa must work towards political stability – Buhari. President Muhammadu Buhari has said that Nigeria and other African countries must work harder to achieve greater political stability and security before they could enjoy the full benefits of partnership arrangements such as the India-Africa Forum. The president, who addressed the plenary session of the third summit of the forum, said that to attract the massive investment in-flows which they need to overcome the challenges of unemployment and wealth creation, Nigeria and other African countries must also establish policy environments that guarantee the sanctity of contracts on the basis of the rule of law.

Tension in Oyo town over selection of monarch. Better energy, environment policies:British H/Commission, Nigeria launch 2050 Calculator. On Wednesday, the Energy commission of Nigeria and the British High Commission, Abuja launched the Nigeria 2050 Calculator. The event was marked with a reception at the British High Commission Residence later in the evening of same day. Instructively, the UK Foreign Secretary’s Special Representative on Climate Change, Sir David King was in Abuja for the launch of the calculator designed to provide strong evidence on energy matters which can be used to inform and shape Nigeria’s future energy and environment policies. Of note, Sir King, is an expert on climate change and has been travelling the world speaking to governments and the public to build support for a new global deal on reducing carbon dioxide emissions.

40m register for BVN as deadline ends tomorrow. Central Bank of Nigeria. CBN, has estimated the number of customers that registered in the bank verification numbers, BVN at 40 million. In a statement yesterday, the apex bank disclosed that there has been less pressure in banking halls across the country among those seeking to do the registration, which goes to buttress the fact that the response in the exercise is encouraging. How Saraki used and dumped pdp senators. Why we won’t devalue the Naira – Osinbajo.

Vice President, Professor Yemi Osinbajo has argued that devaluation of the national currency will do the economy no good at this time. Lagos Govt unveils policy directions. Lagos State governor, Mr. Climate change: Nigeria ranked 6th most vulnerable Nation – FG. As climate change continues to breed several environmental issues, the federal government has begun moves to curtail its negative impact in Nigeria beyond 2030, following launching of a new roadmap tagged ‘2050 calculator,’ even as the most populous African nation stands the risk of being among most vulnerable if prompt action was not taken. The programme, which was introduced in collaboration with British High Commission, outlined various steps needed to militate against deplorable effect of climate change.