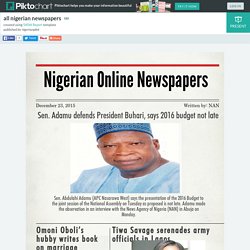 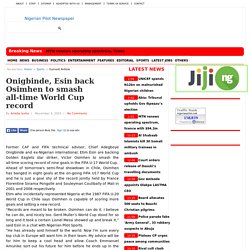 Ahead of tomorrow’s semi-final showdown in Chile, Osimhen has banged in eight goals at the on-going FIFA U17 World Cup and he is just a goal shy of the record jointly held by France Florentine Sinama Pongolle and Souleyman Coulibally of Mali in 2001 and 2008 respectively. Etim who incidentally represented Nigeria at the 1987 FIFA U-20 World Cup in Chile says Osimhen is capable of scoring more goals and setting a new record. “Records are meant to be broken. Osimhen can do it. I believe he can do, and nicely too. Amuneke credits Buhari after Eaglets batter Brazil. Golden Eaglets’ Head Coach, Emmanuel Amuneke has yet again thanked Nigerians with special kudos for President Muhammadu Buhari after his wards decimated the A Selecao of Brazil 3-0 in Sunday’s quarter-final match at the FIFA U-17 World Cup in Vina del Mar. 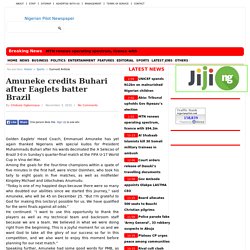 Among the goals for the four-time champions within a spate of five minutes in the first half, were Victor Osimhen, who took his tally to eight goals in five matches, as well as midfielder Kingsley Michael and Udochukwu Anumudu. “Today is one of my happiest days because there were so many who doubted our abilities since we started this journey,” said Amuneke, who will be 45 on December 25. “But I’m grateful to God for making this (victory) possible for us. We have qualified for the semi finals against all odds.” He continued: “I want to use this opportunity to thank the players as well as my technical team and backroom staff because we are a team. Tyson Fury will be tough – Klitschko.

Wladimir Klitschko has paid upcoming opponent Tyson Fury a major compliment by insisting the November 28 bout will be ‘one of the hardest fights’ of his career. 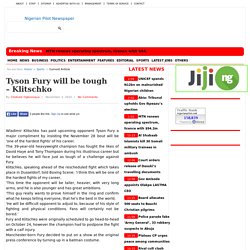 The 39-year-old heavyweight champion has fought the likes of David Haye and Tony Thompson during his illustrious career but he believes he will face just as tough of a challenge against Fury. Klitschko, speaking ahead of the rescheduled fight which takes place in Dusseldorf, told Boxing Scene: ‘I think this will be one of the hardest fights of my career. ‘This time the opponent will be taller, heavier, with very long arms, and he is also younger and has great ambitions. ‘This guy really wants to prove himself in the ring and confirm what he keeps telling everyone, that he’s the best in the world. PDP rejects Borno senatorial bye-election. National leadership of the Peoples Democratic Party, PDP, yesterday alleged that the All Progressives Congress, APC, manipulated the outcome of the Borno Central senatorial bye-election held at the weekend. 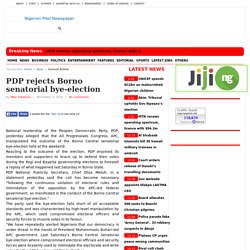 Reacting to the outcome of the election, PDP enjoined its members and supporters to brace up to defend their votes during the Kogi and Bayelsa governorship elections to forestall a replay of what happened last Saturday in Borno State. Gunmen abducts RCCG Pastor, 2 others in Bayelsa. Unknown gunmen recently abducted Mr. 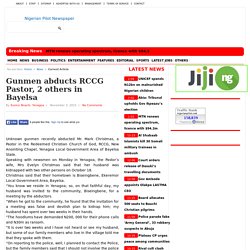 Mark Christmas, a Pastor in the Redeemed Christian Church of God, RCCG, New Anointing Chapel, Yenagoa Local Government Area of Bayelsa State. Speaking with newsmen on Monday in Yenagoa, the Pastor’s wife, Mrs Evelyn Christmas said that her husband was kidnapped with two other persons on October 18. Christmas said that their hometown is Biseingbene, Ekeremor Local Government Area, Bayelsa. “You know we reside in Yenagoa; so, on that faithful day, my husband was invited to the community, Biseingbene, for a meeting by the abductors. 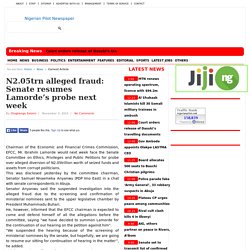 Ibrahim Lamorde would next week face the Senate Committee on Ethics, Privileges and Public Petitions for probe over alleged diversion of N2.05trillion worth of seized funds and assets from corrupt politicians. This was disclosed yesterday by the committee chairman, Senator Samuel Nnaemeka Anyanwu (PDP Imo East) in a chat with senate correspondents in Abuja. Senator Anyanwu said the suspended investigation into the alleged fraud due to the screening and confirmation of ministerial nominees sent to the upper legislative chamber by President Muhammadu Buhari. He, however, informed that the EFCC chairman is expected to come and defend himself of all the allegations before the committee, saying “we have decided to summon Lamorde for the continuation of our hearing on the petition against him”. 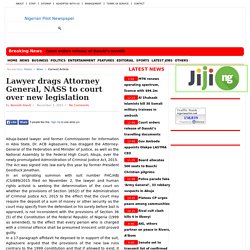 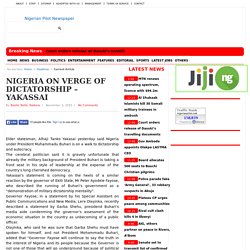 The cerebral politician said it is gravely unfortunate that already the military background of President Buhari is taking a front seat in his style of leadership at the expense of the country’s long cherished democracy. Yakassai’s statement is coming on the heels of a similar reaction by the governor of Ekiti State, Mr Peter Ayodele Fayose, who described the running of Buhari’s government as a “demonstration of military dictatorship mentality”.

Governor Fayose, in a statement by his Special Assistant on Public Communications and New Media, Lere Olayinka, recently described a statement by Garba Shehu, presidend Buhari’s media aide condenming the governor’s assessment of the economic situation in the country as unbecoming of a public officer. Saraki embarks on fence-mending with PDP. Indications emerged at the weekend that the Senate President, Dr. 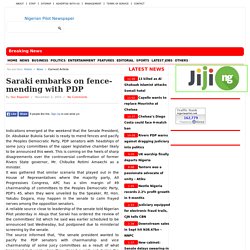 Abubakar Bukola Saraki is ready to mend fences and pacify the Peoples Democratic Party, PDP senators with headships of some juicy committees of the upper legislative chamber likely to be announced this week. This is coming on the heels of sharp disagreements over the controversial confirmation of former Rivers State governor, Mr. Chibuike Rotimi Amaechi as a minister. Enyimba, Warriors clash in Abia ‘El Classico’ Local rivals Enyimba and Abia Warriors will slug it out tomorrow ‘s Abia El-Classico” with both hoping for the points to consolidate their ambitions.

The People’s Elephant’ will be visiting Umuahia with the intention of breaking the jinx of never defeating their oriental brothers in the Premier league since the capital club made it to the elite class two seasons ago. In their previous three meetings, Abia Warriors have an edge with a win and two draws.

Also yesterday, the Court dismissed an application by the Rivers State APC asking the President of the Court of Appeal to constitute a ‘new panel’ to hear the appeal that would flow from the judgment of the Justice Suleiman Ambrosa-led Rivers State Governorship Election Petition Tribunal. Court convicts motorist for attempting to bribe FRSC marshal. A mobile court sitting in Benin City yesterday convicted a motorist, Ayo ‎Okundaye, for attempting to bribe a Federal Road Safety Marshal with N500. The Magistrate, Friday Igbinosa, who found Okundaye guilty of three-count charges of driving without number plate, forged drivers licence and an attempt to bribe an official on duty, ordered him to pay a fine of N35,000. The convict, who pleaded guilty to the charges, however, alleged that the money was not a bribe but a gratification.

Sentencing the convict, Igbinosa said corruption was a serious offence that even the present administration frowns at, saying “ the FRSC has zero tolerance for such act.’’ “I however commend you for admitting guilt but must warn you to desist from the act and ensure you go through appropriate quarters to acquire your vehicle particulars and driver’s licence in the future,’’ he said. House to probe EFCC for non-remittance of N1trn. House of Representatives on Tuesday directed its Committee on Financial Crimes to probe the alleged non-remittance of court forfeited properties and funds by the Economic and Financial Crimes Commission, EFCC running into N1trillion.

Ministerial appointments: There may be no angels after all