Nigerian Pilot Newspaper is a daily newspaper that get the people informed. 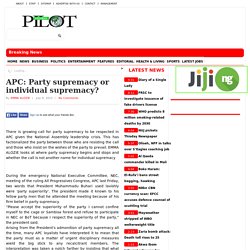 This has factionalized the party between those who are resisting the call and those who insist on the wishes of the party to prevail. EMMA ALOZIE looks at where party supremacy begins and stops and whether the call is not another name for individual supremacy During the emergency National Executive Committee, NEC, meeting of the ruling All Progressives Congress, APC last Friday, two words that President Muhammadu Buhari used lavishly were ‘party superiority’. Buhari’s aloofness and APC’s unending crisis. The crisis in the ruling All Progressives Congress, APC has continued unabated despite assurances by the party that it would soon overcome it. 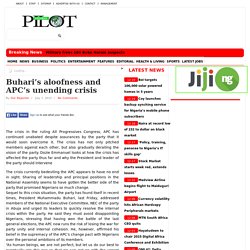 The crisis has not only pitched members against each other, but also gradually derailing the vision of the party. Dozie Emmanuel looks at how the crisis has affected the party thus far and why the President and leader of the party should intervene The crisis currently bedeviling the APC appears to have no end in sight. Sharing of leadership and principal positions in the National Assembly seems to have gotten the better side of the party that promised Nigerians so much change. Sequel to this crisis situation, the party has found itself in recent times, President Muhammadu Buhari, last Friday, addressed members of the National Executive Committee, NEC of the party in Abuja and urged its leaders to quickly resolve the internal crisis within the party. S’EAST GOVS REJECT B/HARAM DETAINEES. APC crisis: still no respite in sight. Why ordinary APC supporters are hopeful of early resolution of the crisis bogging the party down, the leaders seem not be ready to end what can be rightly described as an internecine feud threatening the electoral victory of the party writes EMMA ALOZIE To outsiders, the crisis the ruling All Progressives Congress, APC is going through is normal and will soon come to pass, at least that is the impression some of the leaders are creating. 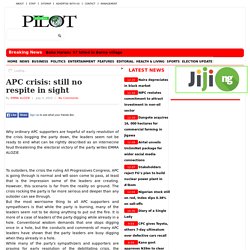 However, this scenario is far from the reality on ground. The crisis rocking the party is far more serious and deeper than any outsider can see through. But the most worrisome thing to all APC supporters and sympathisers is that while the party is burning, many of the leaders seem not to be doing anything to put out the fire. 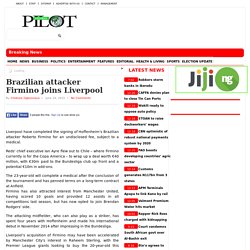 Reds’ chief executive Ian Ayre flew out to Chile – where Firmino currently is for the Copa America – to wrap up a deal worth €40 million, with €30m paid to the Bundesliga club up front and a potential €10m in add-ons. The 23-year-old will complete a medical after the conclusion of the tournament and has penned terms on a long-term contract at Anfield. Firmino has also attracted interest from Manchester United, having scored 10 goals and provided 12 assists in all competitions last season, but has now opted to join Brendan Rodgers’ side. The attacking midfielder, who can also play as a striker, has spent four years with Hoffenheim and made his international debut in November 2014 after impressing in the Bundesliga.

CAFFA denies plan to close Tin Can Ports. LEADERSHIP TUSSLE: SARAKI DARES APC, REJECTS LAWAN, AKUME. Siasia may replace Keshi. Pepe Reina quits Bayern for Napoli. Bayern Munich have confirmed that goalkeeper Pepe Reina has been released from his contract, allowing him to sign for Napoli on a free transfer. 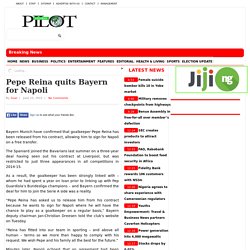 SEC creates products to attract investors. Dogara and task of confidence building. The Speaker of the House of Representatives, Hon. 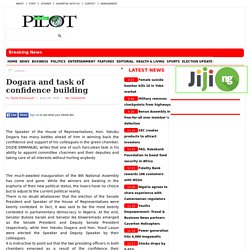 Yakubu Dogara has many battles ahead of him in winning back the confidence and support of his colleagues in the green chamber. DOZIE EMMANUEL writes that one of such herculean task is his ability to appoint committee chairmen and their deputies and taking care of all interests without hurting anybody The much-awaited inauguration of the 8th National Assembly has come and gone. While the winners are basking in the euphoria of their new political status, the losers have no choice but to adjust to the current political reality. There is no doubt whatsoever that the election of the Senate President and Speaker of the House of Representatives were keenly contested. APC crisis: Odigie-Oyegun under pressure to quit. Enyeama ends Eagles career as NFF ban looms. Pirlo to join Lampard at New York City FC. Juventus playmaker Andrea Pirlo will seal a switch to New York City FC on Friday, Goal understands. 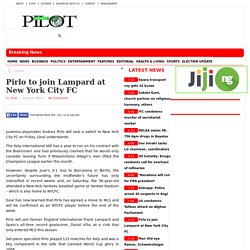 The Italy international still has a year to run on his contract with the Bianconeri and had previously claimed that he would only consider leaving Turin if Massimiliano Allegri’s men lifted the Champions League earlier this month. However, despite Juve’s 3-1 loss to Barcelona in Berlin, the uncertainty surrounding the midfielder’s future has only intensified in recent weeks and, on Saturday, the 36-year-old attended a New York Yankees baseball game at Yankee Stadium – which is also home to NYCFC. Goal has now learned that Pirlo has agreed a move to MLS and will be confirmed as an NYCFC player before the end of the week.

Pirlo will join former England international Frank Lampard and Spain’s all-time record goalscorer, David Villa, at a club that only entered MLS this season. Interbank rates rise on bonds, treasury bills auction. Tinubu: Agonies of a kingmaker. For Tinubu, when it rains, it pours. 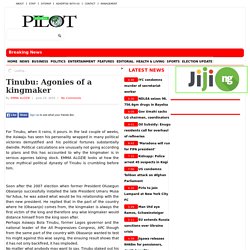 In the last couple of weeks, the Asiwaju has seen his personality wrapped in many political victories demystified and his political fortunes substantially dwindle. Political calculations are unusually not going according to plans and this has accounted to why the kingmaker is in serious agonies taking stock. EMMA ALOZIE looks at how the once mythical political dynasty of Tinubu is crumbling before him. Female suicide bombers kill 20, injure 66 in Maiduguri. Official: Liverpool complete Gomez signing. NACCIMA promises to boost agric value chain. Saraki’s visit to Obasanjo and matters hidden. Senator Bukola Saraki’s recent visit to the Hilltop Mansion in Ota of former President Olusegun Obasanjo has expectedly left many political followers wondering. 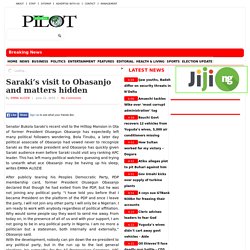 Bola Tinubu, a later day political associate of Obasanjo had vowed never to recognize Saraki as the senate president and Obasanjo has quickly given Saraki audience even before Saraki could visit any ranking APC leader. This has left many political watchers guessing and trying to unearth what ace Obasanjo may be having up his sleep, writes EMMA ALOZIE After publicly tearing his Peoples Democratic Party, PDP membership card, former President Olusegun Obasanjo declared that though he had exited from the PDP, but he was not joining any political party. “I have told you before that I became President on the platform of the PDP and once I leave the party, I will not join any other party. I will only be a Nigerian. BUHARI PROBES EX-MINISTERS. Entertainers storm Georgewill Etella’s mother’s burial. U-20 World Cup: Why I benched ‘unfit’ Iheanacho –Manu. Union Bank launches smarter banking center, holds AGM. APC’s zoning gaffe: Will it hurt the party? Digital migration: Nigeria, S/Africa, 52 others still analogue.

Canada 2015: Nkwocha chases Enyeama’s record. ITU standards to integrate Internet of Things in Smart Cities. APC: Uneasy calm in turbulent house. By saying that APC is ready to work with Senator Saraki as the senate president despite the initial opposition from the party, Chief Odigie-Oyegun seems to have doused the tension in the party. 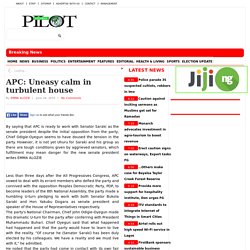 However, it is not yet Uhuru for Saraki and his group as there are tough conditions given by aggrieved senators, which fulfillment may mean danger for the new senate president writes EMMA ALOZIE Less than three days after the All Progressives Congress, APC vowed to deal with its errant members who defied the party and connived with the opposition Peoples Democratic Party, PDP, to become leaders of the 8th National Assembly, the party made a humbling U-turn pledging to work with both Senator Bukola Saraki and Hon Yakubu Dogara as senate president and speaker of the House of Representatives respectively. The party’s National Chairman, Chief John Odigie-Oyegun made this dramatic U-turn for the party after conferring with President Muhammadu Buhari. N8bn CBN fraud: No bail for accused bankers, Court rules. Bribery scandal: My hands are clean – Ugbade.