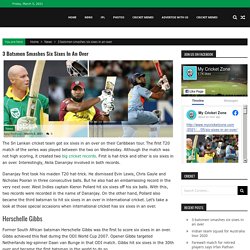 The first T20 match of the series was played between the two on Wednesday. Although the match was not high scoring, it created two big cricket records. First is hat-trick and other is six sixes in an over. Interestingly, Akila Dananjay involved in both records. Dananjay first took his maiden T20 hat-trick. Herschelle Gibbs Former South African batsman Herschelle Gibbs was the first to score six sixes in an over. Yuvraj Singh six sixes India’s star cricketer Yuvraj Singh did this feat in T20 cricket. Kieron Pollard now The current West Indies captain Kieron Pollard repeated the feats of Yuvraj and Gibbs. 2011 World cup final fixing allegations. 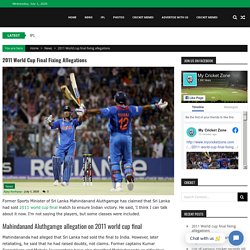 He said, ‘I think I can talk about it now. I’m not saying the players, but some classes were included. IPL 2020 could be start in September. Indian Premier League (IPL) is biggest tournament of BCCI and is world’s largest league. COVID19 caused BCCI to postpone IPL 2020 for indefinitely. However, now the possibilities of organizing the IPL are increasing. There is good news for cricket fans that BCCI is considering making the 13th season of IPL available from September 25. List of various cricket records till date. Cricket is the national game of more than one country. 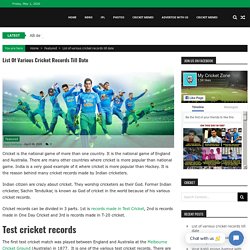 It is the national game of England and Australia. There are many other countries where cricket is more popular than national game. AB de Villiers comeback in T-20 world cup is uncertain due the COVID-19 pandemic. All the game tournaments till July 2020 have been canceled or postponed due to Coronavirus (Covid-19). 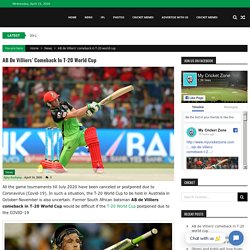 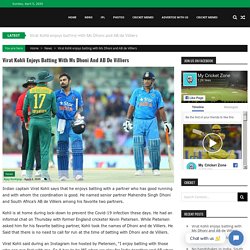 He named senior partner Mahendra Singh Dhoni and South Africa’s AB de Villiers among his favorite two partners. Kohli is at home during lock-down to prevent the Covid-19 infection these days. He had an informal chat on Thursday with former England cricketer Kevin Pietersen. While Pietersen asked him for his favorite batting partner, Kohli took the names of Dhoni and de Villiers. He Said that there is no need to call for run at the time of batting with Dhoni and de Villiers. Virat Kohli said during an Instagram live hosted by Pietersen, “I enjoy batting with those who can run fast with me. Indian captain Virat Kohli says that he enjoys batting with a partner who has good running and with whom the coordination is good. क्विंटन डि कॉक वनडे और टी-20 सीरीज से बाहर. India beat Pakistan by 203 runs in semi-final. India defeated Pakistan by 203 runs in the second semi-final match of the ICC Under-19 World Cup. 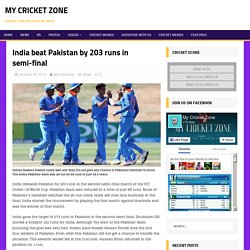 Pakistan team was reduced to a total of just 69 runs. None of Pakistan’s batsmen reached the 20-run mark. India will now face Australia in the final. India started the tournament by playing the first match against Australia and was the winner of that match. India gave the target of 273 runs to Pakistan in the second semi-final. 5 players may get big amount in IPL-2018. The IPL-11 auction is to be held on January 27 and 28. 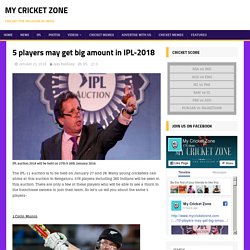 Many young cricketers can shine at this auction in Bengaluru. 578 players including 360 Indians will be seen in this auction. There are only a few of these players who will be able to see a thorn in the franchisee owners to join their team. So let’s us tell you about the same 5 players- 1.Colin Munro The New Zealand opener is in excellent form these days. 2. Get The Best Kitesurfing Equipment Around. Instant make Chilli Idli. India vs South Africa : These are the reasons why India lost centurion test.

Indian team was hoping to win the Centurion test after losing the first test against South Africa in Cape Town. 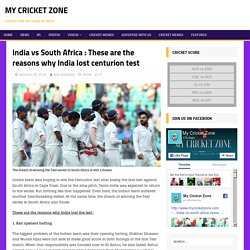 Due to the slow pitch, Team India was expected to return to the series. But nothing like that happened. Even here, the Indian team suffered another heartbreaking defeat. At the same time, the dream of winning the Test series in South Africa also broke. These are the reasons why India lost the test : 1. The biggest problem of the Indian team was their opening batting. 2. The strength of the Indian team is considered to be their deep batting. 3. Team India’s main test wicket keeper Wriddhiman Saha got injured before the second Test, after which Parthiv Patel got the chance in the team.

5 Difference between baseball bat and cricket bat. Baseball and cricket are two sports that use somewhat similar equipment. 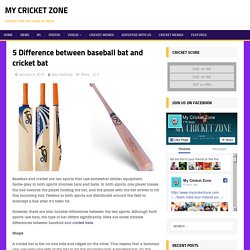 Game-play in both sports involves bats and balls. In both sports, one player tosses the ball towards the player holding the bat, and the player with the bat strives to hit this incoming ball. Fielders in both sports are distributed around the field to intercept a ball after it’s been hit. However, there are also notable differences between the two sports. Team India to tour Ireland in June 2018.

Virat and Anushka meets PM Narendra Modi. Zaheer Khan married to Sagarika Ghatge. Team India’s former fast bowler Zaheer Khan married to Bollywood actress Sagarika Ghatge. The Court Marriage of Zaheer, popularly known as ‘Zak’ and Sagarika, took place on Thursday. Zaheer will give reception of his marriage at the Taj Mahal Palace in Mumbai on November 27, in which many famous personalities of the cricket world and Bollywood are likely to be present.

Zaheer and Sagarika’s photos have been posted by their friend Anjana Sharma on social media. Sagarika came to the limelight in the 2007 film ‘Chak De India’ in Bollywood. IPL team Delhi Daredevils captain Zaheer Khan and Sagarika were dating each other for a long time in the 2017 season. Hardik Pandya latest photoshoot pics - 2017. Hardik Pandya is well known for his aggressive batting in the cricket field. He has earned a good name in just a few months of his cricketing career. He is treated as a good all-rounder for India after Kapil Dev. He has shown that he has ability to become no. 1 all rounder. Swing master Bhuvneshwar Kumar will give three reception after his marriage. Indian cricket team’s swing master Bhuvneshwar Kumar has joined Nupur for the preparation of their marriage. Bhuvi is helping his family in the preparations of his marriage. Bhuvi is getting married on 23rd November in Hotel Bravura (Meerut).

The first reception will be in Meerut. The second reception will be held on November 26 in Bhuvi’s village Luharli of Bulandshahr. The third reception for the BCCI and fellow cricketers will be held on December 5 at Hotel Taj, Delhi. Bhuvi’s sherwani is specially ordered from Kolkata. Mumbai girl slams 202 runs in under 19 one day tournament. Ashish Nehra plans to retire from International Cricket - My Cricket Zone. Indian fast bowler Ashish Nehra will retire from international cricket after the first T-20 match against New Zealand on November 1 in Delhi.

Feroz Shah Kotla is the home ground for Nehra. A senior BCCI official told that Nehra has told Team India Chief coach Ravi Shastri and captain Virat Kohli about this decision. Bhuvneshwar Kumar gets engaged to Nupur Nagar - My Cricket Zone. According to reports, Team India’s star bowler Bhubaneswar Kumar has got engaged. He got engaged to Nurpur Nagar of Meerut. He had recently posted a photo on social media with Nupur and told the Better Half. According to sources, the marriage of Bhuvi and Nupur can take place in December this year. Team India has to play three-match T-20 series against Australia, which includes Bhuvneshwar Kumar. Before that Bhuvneshwar Kumar has engaged. Hardik Pandya becomes man of the series - My Cricket Zone. Cricket fans hoped that Steve Smith’s Australian team would give a tough fight to Team India in the five-match series, but their hopes were not fulfilled. Team India did a great job and won the series by 4-1.

It was a relief for the Australian team that they got away from ‘Whitewash’ after winning the fourth ODI. My wife wants me to play in the World Cup 2019 - Wriddhiman Saha - My Cricket Zone. Indian Test team’s wicket keeper-batsman Wriddhimaan Saha wants to play in the 2019 World Cup. Saha said that his wife wants him to play the ICC World Cup in 2019 and this is why he is working hard. Indian Cricket Team enjoyment pics during Sri Lanka Tour 2017 - My Cricket Zone. The Indian Cricket Team will never forget their tour of Sri Lanka as the team made many records on this tour. It was the first occasion that an Indian team registered an all-win record across all formats in an overseas tour.

Kohli is on top with 873 points, Australian David Warner is at 2nd position with 861 points while Mr. 360 degree, AB De Villiers, is at 3rd position with 847 points. Other Indian batsmen include former captain Mahendra Singh Dhoni (12th), Shikhar Dhawan (13th) and vice-captain Rohit Sharma (14th) in the top 15. However, no Indian bowler is included in the top ten. Fast bowler Bhuvneshwar Kumar (13th) is the only Indian bowler involved in the top 15. Hardik Pandya first test century - My Cricket Zone. The third and final Test being played between India and Sri Lanka became extremely special for Hardik Pandya. Pandya scored the first century of his Test career in this Test match.