Wearable Devices Magazine - The Authority in Wearable Technology. 50 wearable tech gamechangers for 2016. It's that time of year once again when the Wareable team set aside thoughts of mince pies and look ahead to what's in store for wearable tech in 2016. 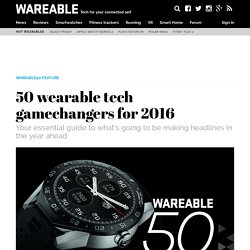 In last year's Wareable 50, we correctly pointed out that the Apple Watch (surprise, surprise), Xiaomi and Tag Heuer would be grabbing the headlines. We also said it would be a big year for the Jawbone UP3 and smart clothing. So we didn't get everything right. Now it's time to to make our predictions again. We've sat round tables, collected our thoughts, drank endless cups of coffee from Wareable-branded mugs and reshuffled the list more often than a coalition cabinet. 50. The upcoming 2016 VR explosion needs games and games don't get much bigger than Gran Turismo. 49. Striving to touch hearts and move markets, Frog has worked with Unicef in the Wearables for Good challenge as well as designing the hit Chinese smartwatch, Ticwatch. 48. 47.

There are lots of wearables to measure sleep but none so far that will actually improve it. 46. 45. Google Looks to Connect More Devices. Wearable devices: Powering your own wellness. Wearable Devices Magazine - The Authority in Wearable Technology. When Technology Changes Who We Are: Advantages of Wearable Devices. Working with technology on a desktop computer is one thing. 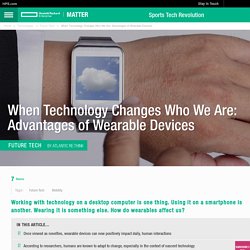 Using it on a smartphone is another. Wearing it is something else. How do wearables affect us? In this article... Once viewed as novelties, wearable devices can now positively impact daily, human interactionsAccording to researchers, humans are known to adapt to change, especially in the context of nascent technologyIn one study, wearables conditioned humans to improve behavior in social settingsAs wearable technology matures, more experimentation can address additional behavioral issues The first time I saw a person talking on a hands-free cellphone, I was in college, and I remember it very clearly. This story is useful for illustrating the tensions that can arise when we grant technologies residence on our bodies. Wearable Technology and the Internet of Things - Ericsson. Body of sensors Consumers see that smartphones don’t have to be the only information device in the IoT era, in which devices and physical objects will be connected via the cloud. 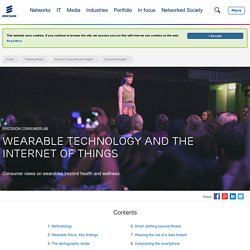 In the future, 74 percent of the smartphone users surveyed believe they will be using wearables to exchange information with other devices and physical things around them. It’s also a shift that has been pointed to in Ericsson ConsumerLab’s annual trend report, the ‘10 Hot Consumer Trends 2016’, in which we indicated that 85 percent of smartphone users think intelligent wearable electronic assistants will be commonplace within 5 years. 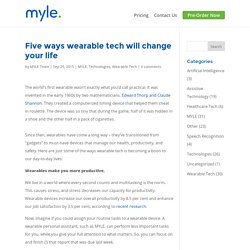 It was invented in the early 1960s by two mathematicians, Edward Thorp and Claude Shannon. They created a computerized timing device that helped them cheat in roulette. The device was so tiny that during the game, half of it was hidden in a shoe and the other half in a pack of cigarettes. Since then, wearables have come a long way – they’ve transitioned from “gadgets” to must-have devices that manage our health, productivity, and safety.

Here are just some of the ways wearable tech is becoming a boon to our day-to-day lives: Wearables make you more productive. We live in a world where every second counts and multitasking is the norm. Now, imagine if you could assign your routine tasks to a wearable device. They go beyond tracking to help you achieve goals. Sure, wearables can track your data – how many hours you sleep, what you eat, how many steps you take. Wearables can make you, and your community, safer. How Wearable Technology Will Change the Internet. Home » Data Visualization » How Wearable Technology Will Change the Internet New round here? 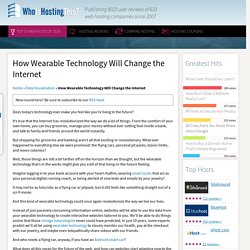 Be sure to subscribe to our RSS feed. Does today’s technology ever make you feel like you’re living in the future? It’s true that the Internet has revolutionized the way we do a lot of things. From the comfort of your own home, you can buy groceries, manage your money without ever setting foot inside a bank, and talk to family and friends around the world instantly. But shopping for groceries and banking aren’t all that exciting or revolutionary. Well, those things are still a bit farther off on the horizon than we thought, but the wearable technology that’s in the works might give you a bit of that living-in-the-future feeling.

Imagine logging in to your bank account with your heart rhythm, wearing smart socks that act as your personal digital running coach, or being alerted of new texts and emails by your jewelry? And who needs a flying car, anyway, if you have an Android smart car? Sources.