As Riots Follow Freddie Gray's Death in Baltimore, Calls for Calm Ring Hollow. Rioting broke out on Monday in Baltimore—an angry response to the death of Freddie Gray, a death my native city seems powerless to explain. 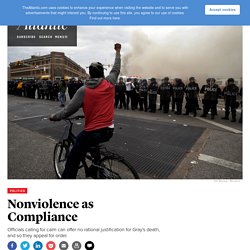 Gray did not die mysteriously in some back alley but in the custody of the city's publicly appointed guardians of order. And yet the mayor of that city and the commissioner of that city's police still have no idea what happened. I suspect this is not because the mayor and police commissioner are bad people, but because the state of Maryland prioritizes the protection of police officers charged with abuse over the citizens who fall under its purview.

The citizens who live in West Baltimore, where the rioting began, intuitively understand this. I grew up across the street from Mondawmin Mall, where today's riots began. Over the past four years, more than 100 people have won court judgments or settlements related to allegations of brutality and civil rights violations. The people now calling for nonviolence are not prepared to answer these questions. David Simon calls Baltimore police 'an army of occupation' David Simon, the creator of The Wire, has again weighed in on unrest in his adopted city of Baltimore, turning his frustration from the protesters to the “army of occupation” of the city’s police. 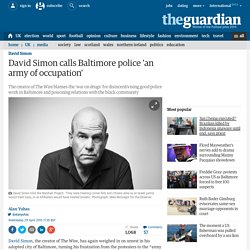 Simon blamed the “war on drugs” as “the part that seems systemic and connected” to the riots and mass arrests of the past week, telling the Marshall Project – a news site focused on criminal justice – that the drug war had corroded relations between police and black people and hollowed out the police force. On Monday night a funeral procession for Freddie Gray, a man who died after his spine was nearly severed at the neck in police custody, turned into violent protests and riots that ended with 15 officers injured, some 200 arrests and 144 vehicles burned.

On Tuesday, national guard troops moved into the city and imposed a 10pm curfew. “In these drug-saturated neighborhoods, they weren’t policing their post any more,” he said. David Simon: 'There are now two Americas. My country is a horror show' America is a country that is now utterly divided when it comes to its society, its economy, its politics. 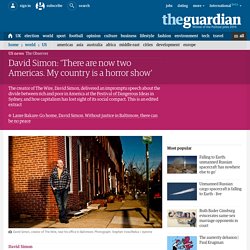 There are definitely two Americas. I live in one, on one block in Baltimore that is part of the viable America, the America that is connected to its own economy, where there is a plausible future for the people born into it. About 20 blocks away is another America entirely. It's astonishing how little we have to do with each other, and yet we are living in such proximity. There's no barbed wire around West Baltimore or around East Baltimore, around Pimlico, the areas in my city that have been utterly divorced from the American experience that I know.

I think we've perfected a lot of the tragedy and we're getting there faster than a lot of other places that may be a little more reasoned, but my dangerous idea kind of involves this fellow who got left by the wayside in the 20th century and seemed to be almost the butt end of the joke of the 20th century; a fellow named Karl Marx. David Simon on Baltimore’s Anguish. BK: What do people outside the city need to understand about what’s going on there — the death of Freddie Gray and the response to it? 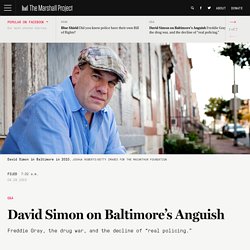 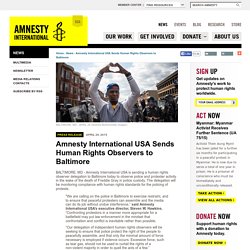 The delegation will be monitoring compliance with human rights standards for the policing of protests. "We are calling on the police in Baltimore to exercise restraint, and to ensure that peaceful protesters can assemble and the media can do its job without undue interference,” said Amnesty International USA’s executive director, Steven W. Hawkins. “Confronting protestors in a manner more appropriate for a battlefield may put law enforcement in the mindset that confrontation and conflict is inevitable rather than possible. “Our delegation of independent human rights observers will be seeking to ensure that police protect the right of the people to peacefully assemble, and that only the minimal amount of force necessary is employed if violence occurs. Go home, David Simon. Without justice in Baltimore, there can be no peace. No riot in the human history has ever been about just one person. 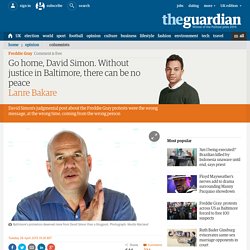