FF4 mobile beta. Features. The Alpha release of the next major version of Fennec is now available for Android and Nokia N900 users to download and test. 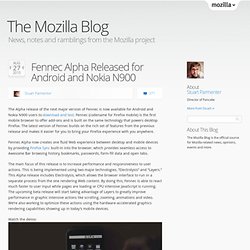 Fennec (codename for Firefox mobile) is the first mobile browser to offer add-ons and is built on the same technology that powers desktop Firefox. The latest version of Fennec builds on the rich set of features from the previous release and makes it easier for you to bring your Firefox experience with you anywhere. Fennec Alpha now creates one fluid Web experience between desktop and mobile devices by providing Firefox Sync built-in into the browser, which provides seamless access to Awesome Bar browsing history, bookmarks, passwords, form-fill data and open tabs.

The main focus of this release is to increase performance and responsiveness to user actions. Dev. Firefox OS Firefox OS is an open source mobile operating system which uses Linux and Mozilla's Gecko engine to run a user interface and set of applications written entirely in HTML, CSS and JavaScript. 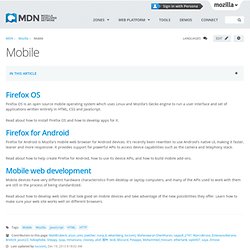