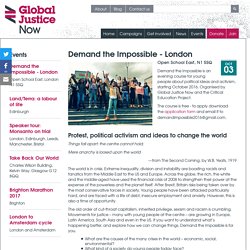 Organised by Global Justice Now and the Critical Education Project. The course is free - to apply download the application form and email it to demandimpossible2016@gmail.com. Protest, political activism and ideas to change the world Things fall apart; the centre cannot hold; Mere anarchy is loosed upon the world —from The Second Coming, by W.B. The world is in crisis. The old order of cut-throat capitalism, inherited privilege, sexism and racism is crumbling. What are the causes of the many crises in the world – economic, social, environmental? Demand the Impossible will include Interactive sessions on topics such as: Brexit Britain, London's housing crisis, migration and its causes, capitalism and alternative systems, mental health, Trump vs Clinton and more.

Demand the Impossible is for 16-25 year-olds. Frequently asked questions Exploring ideas. London's post-war reconstruction plan promised 'new order and dignity' The County of London Plan, Patrick Abercrombie and JH Forshaw’s proposal for the postwar reconstruction of London, was exhibited at Westminster Hall for a week in July 1943. 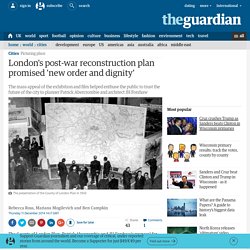 The London County Council (LCC) was ambivalent as to whether to put on an exhibition, whether there would be enough interest to justify expenditure, but decided to go ahead anyway. Individual invitations were issued to government officials and professionals and in a few instances, invitees replied to the council’s surprise, asking if they might bring their wives along. In the end the exhibition received more than 10,000 visitors, including officials, dignitaries and interested members of the public. The exhibition at Westminster Hall proved such a success that the LCC decided to relocate it to the Royal Arts Society to extend its run for another few months, where it was seen by a further 50,000 visitors. The photo raises some questions.

Find out more about the project at Picturing Place. New Tools For Resolving Wicked Problems. The County of London Plan: Amazon.co.uk: E. J. Carter and Erno Goldfinger: Books. RSA Animate. Londonmapper. Glossopoly. Image used in Glossopoly Banner Introduction Glossopoly emerged out of research conducted as part of an AHRC research project on senses of community in the town of Glossop. 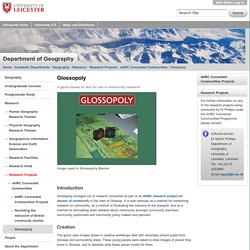 It is acts variously as a method for conducting research on community, as a method of illustrating the outcome of the research, and as a method for stimulating wider debates about community amongst community members, community practioners and community policy makers and planners. Creation The game uses images drawn in creative workshops held with secondary school pupils from Glossop and surrounding areas. Image of school drawing session From these drawings, Paul Gent, who is an artist associated with High Peaks Community Arts, constructed a board which reflects that of the board game 'Monopoly', albeit with a new focus of community and the local area. Glossopoly being played at London showcase event It is hoped to further develop this game as a tool for community research and reflection. Londoners: The Board Game. Londoners: The Board Game is a concept for a London-focused Risk-style game, currently being crowdfunded on Kickstarter by “Stef and Ollie” (no relation!) 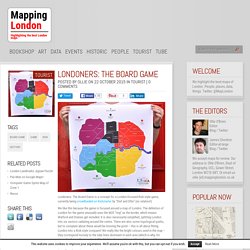 We like this because the game is focused around a map of London. The definition of London for the game unusually uses the M25 “ring” as the border, which means Watford and Staines get included. It is also necessarily simplified, splitting London into six sectors radiating around the centre. There are also some topological quirks, but to complain about these would be missing the point – this is all about fitting London into a Risk-style conquest!

We really like the bright colours used in the map – they correspond loosely to the tube lines dominant in each area (which is why, for example, the northern sector is black). As well as the main game, which involves missions for your character, such as buying up the football stadiums or the City, the area cards that will come with the board can make a mini “top trumps” style game. London Treasure Hunt - HiddenCity.