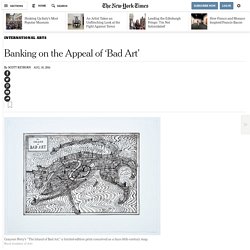 The etching, conceived as a faux-16th-century map of an island that looks suspiciously like Venice, uses satirical place names to list the characteristics that define, according to Mr. Perry, bad art: “mainstream,” “corny retro,” “vaguely decorative” and “kitsch,” among others. Yet for all the disdain that Mr. Perry and the Prada-clad denizens of Art Basel and Frieze might have for such decorative mainstream art, there are plenty of other people who like it, and who want to own it. “They’re buying because they love the art, and it’s at a price they can put on a credit card. 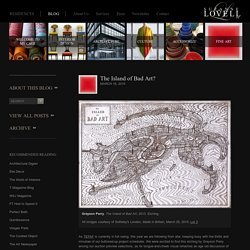 Etching. All images courtesy of Sotheby's London, Made in Britain, March 25, 2015, Lot 3 As TEFAF is currently in full swing, this year we are following from afar, keeping busy with the thrills and minutiae of our buttoned-up project schedules. We were excited to find this etching by Grayson Perry among our auction preview selections, as its tongue-and-cheek visual rehashes an age old discussion of "Bad Art" in a purely visual and amusing way.

The etching, conceived as a faux-16th-century map of an island that looks suspiciously like Venice, uses satirical place names to list the characteristics that define, according to Mr. Putting together the pieces and parts to tell the client's story is what we do here every day, and we constantly grapple with how to best honor the history of that individual while suggesting art that is tasteful, intelligent, and not "bad", which is such a subjective term! Grayson Perry interview: Map of Days - News - Art Fund. The Turner Prize winner talks to Steve Hopkinson about his ArtFunded self-portrait Map of Days, why too much planning can kill an artwork, and contemporary art's identity crisis. 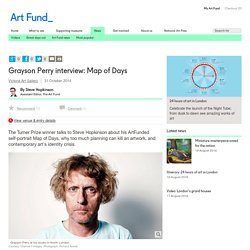 Grayson Perry at his studio in North London Courtesy Channel 4 Images. Photograph: Richard Ansett Map of Days isn't a typical self-portrait. How did you first settle on the idea of doing a map? Well, I've done several other maps. That is the nature of the self – our identity only works in company. Was Map of Days inspired by any other work? If I was looking at any maps I suppose they would have been quite old: 15th or 16th-century maps of fortifications and things from Italy and places like that. “I have the feeling of a globalised dismemberment of purpose. Stories about individuals' paths through life, their trials and tribulations, feature a lot in your work. The house project I’m working on now in Essex, that’s a story of an individual life as well.

Your Channel 4 series, Who Are You? Now that’s dissipated. Grayson Perry. Grayson Perry uses the seductive qualities of ceramics and other art forms to make stealthy comments about societal injustices and hypocrisies, and to explore a variety of historical and contemporary themes. 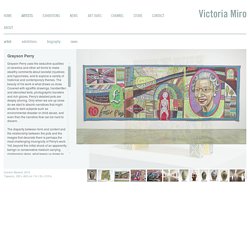 The beauty of his work is what draws us close. Covered with sgraffito drawings, handwritten and stencilled texts, photographic transfers and rich glazes, Perry's detailed pots are deeply alluring. Only when we are up close do we start to absorb narratives that might allude to dark subjects such as environmental disaster or child abuse, and even then the narrative flow can be hard to discern. The disparity between form and content and the relationship between the pots and the images that decorate them is perhaps the most challenging incongruity of Perry's work.

Yet, beyond the initial shock of an apparently benign or conservative medium carrying challenging ideas, what keeps us drawn to the work is its variety.