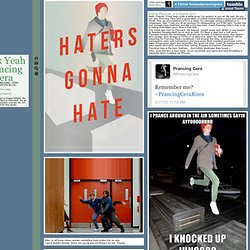 It has been quite a while since I’ve spoken to you all. My bad. As you can see, Prancing Cera lived a good week of infamy before dying a quick and painless death. Hell, we accomplished a lot in a week. For example, being published in a newspaper. The break was nice for Prancera. Prancing Cera is the hero Gotham… And tumblr, deserves! (Also, sorry this isn’t a read more. What's Michael Cera Running Away From?: Pics, Videos, Links, News. Prancing Cera. About Prancing Cera is a photoshop meme featuring a photograph of actor Michael Cera in mid-air leaping from one platform to another on a dock in Haugesund, Norway. 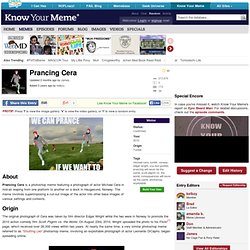 The meme involves superimposing a cut-out image of the actor into other base images of various settings and contexts. Origin The original photograph of Cera was taken by film director Edgar Wright while the two were in Norway to promote the 2010 action comedy film Scott Pilgrim vs. the World. On August 23rd, 2010, Wright uploaded the photo to his Flickr page, which received over 26,000 views within two years. Spread On August 24th, 2010, the single topic blog Fuck Yeah Prancing Cera was launched and over the following week, more than 830 instances were featured on the Tumblr site.

Also on August 24th, Urban Dictionary user LeilaN submitted an entry for “Prancing Cera”, which cited Edgar Wright as the original photographer. Notable Examples Search Interest External References. Meme Watch: Prancing Cera. Edgar Wright, the director of Scott Pilgrim vs. the World and the writer/director of Shaun of the Dead and Hot Fuzz, kickstarted a meme this week when he posted the picture of Michael Cera to the right on his Flickr page. 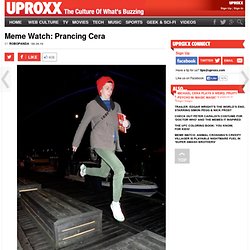 Almost immediately a tumblr page called fyeahprancingcera started, while sites like BuzzFeed started collecting user-submitted photoshops, and comedy tumblr pages like TheFrogman added more lulz. I’ve collected twenty-one of my favorite Prancing Ceras below, along with a few photoshops of my own. The next two photographs are the first thing I thought of, and sure enough, someone else had noticed this, too: (click pictures to enlarge) [via] [via] We have to prance deeper.

Here’s the best example of the many Indiana Jones ones. I hate you so much right now, internet. As an expert on the ways of gayness I declare this the gayest one. I spoke too soon, this is the gayest one. Wait, this is the gayest. Damn it. I stand corrected. Giggity. [via] [via] [via] [via] Meme : le meme "Prancing Cera" Pour fêter les 20 ans de sa marque, Christian Louboutin a décidé de faire un beau cadeau à toutes les modeuses européennes, puisqu’il lance en effet sa plateforme marchande en ligne en Europe. 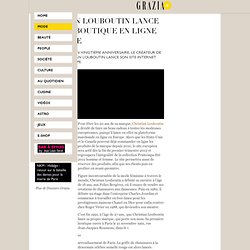