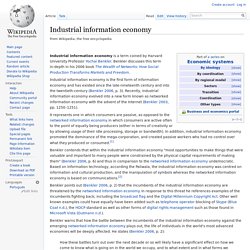 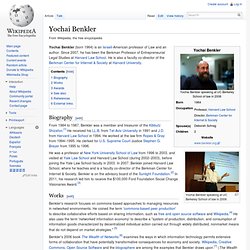 Since 2007, he has been the Berkman Professor of Entrepreneurial Legal Studies at Harvard Law School. He is also a faculty co-director of the Berkman Center for Internet & Society at Harvard University. Biography[edit] From 1984 to 1987, Benkler was a member and treasurer of the Kibbutz Shizafon.[1] He received his LL.B. from Tel-Aviv University in 1991 and J.D. from Harvard Law School in 1994.

1. Why values matter. Art valuation. An art auction at Christies An art curator, Anne Pontégnie Historic valuation and contemporary art[edit] The source of a work's artistic charisma has long been debated between artists who create and patrons who enable, but the charismatic power of artworks on those who would possess them is historically the initial driver of value.[1][2] In the 1960s that charismatic power started edging over to accommodate commercialized culture and a new industry of art, when aesthetic value fell from prominence to parity with Pop art and Andy Warhol's idea of business art, a recognition that art has become a business and making money in business is an art.[3][4] One of many artists to follow Warhol is Jeff Koons, a stockbroker turned artist who also borrowed imagery from popular culture and made millions.[5][6] The art market economic model[edit] Market size[edit] 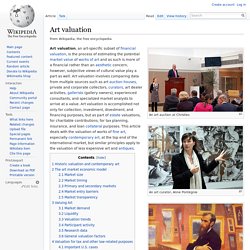 A. H. Maslow (1943) A Theory of Human Motivation. Classics in the History of Psychology An internet resource developed byChristopher D. 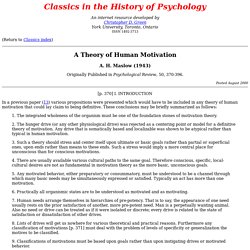 GreenYork University, Toronto, OntarioISSN 1492-3713 (Return to Classics index) A Theory of Human Motivation. Fundamental human needs. Human Needs and Human-scale Development,[1] developed by Manfred Max-Neef and others (Antonio Elizalde and Martin Hopenhayn), are seen as ontological (stemming from the condition of being human), are few, finite and classifiable (as distinct from the conventional notion of conventional economic "wants" that are infinite and insatiable).[2] They are also constant through all human cultures and across historical time periods. 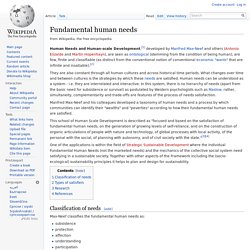 What changes over time and between cultures is the strategies by which these needs are satisfied. Human needs can be understood as a system - i.e. they are interrelated and interactive. In this system, there is no hierarchy of needs (apart from the basic need for subsistence or survival) as postulated by Western psychologists such as Maslow, rather, simultaneity, complementarity and trade-offs are features of the process of needs satisfaction. 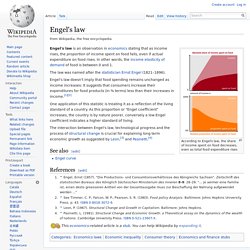 In other words, the income elasticity of demand of food is between 0 and 1. The law was named after the statistician Ernst Engel (1821–1896). Engel's law doesn't imply that food spending remains unchanged as income increases: It suggests that consumers increase their expenditures for food products (in % terms) less than their increases in income.[1][2] Energy hierarchy. The Energy Hierarchy with the most favoured options at the top The Energy Hierarchy is a classification of energy options, prioritised to assist progress towards a more sustainable energy system. 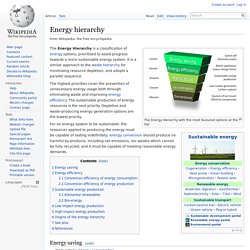 It is a similar approach to the waste hierarchy for minimising resource depletion, and adopts a parallel sequence. The highest priorities cover the prevention of unnecessary energy usage both through eliminating waste and improving energy efficiency. The sustainable production of energy resources is the next priority. Depletive and waste-producing energy generation options are the lowest priority. For an energy system to be sustainable: the resources applied to producing the energy must be capable of lasting indefinitely; energy conversion should produce no harmful by-products, including net emissions, nor wastes which cannot be fully recycled; and it must be capable of meeting reasonable energy demands. Energy saving[edit] Leonard Jimmie Savage. Leonard Jimmie Savage (born Leonard Ogashevitz; 20 November 1917 – 1 November 1971) was an American mathematician and statistician. 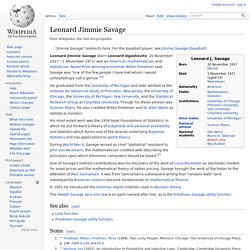 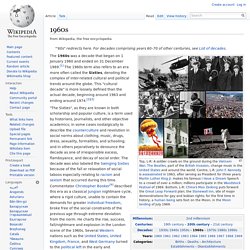 For decades comprising years 60–70 of other centuries, see List of decades. Top, L-R: A soldier crawls on the ground during the Vietnam War; The Beatles, part of the British Invasion, change music in the United States and around the world. Centre, L-R: John F. Kennedy is assassinated in 1963, after serving as President for three years; Martin Luther King Jr. makes his famous I Have a Dream Speech to a crowd of over a million; millions participate in the Woodstock Festival of 1969. Bottom, L-R: China's Mao Zedong puts forward the Great Leap Forward plan; the Stonewall Inn, site of major demonstrations for gay and lesbian rights; for the first time in history, a human being sets foot on the Moon, in the Moon landing of July 1969.

The 1960s was a decade that began on 1 January 1960 and ended on 31 December 1969.[1] The 1960s term also refers to an era more often called the Sixties, denoting the complex of inter-related cultural and political trends around the globe. General Systems Theory. © 1993, David S. 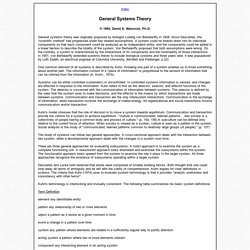 Walonick, Ph.D. General systems theory was originally proposed by biologist Ludwig von Bertalanffy in 1928. Since Descartes, the "scientific method" had progressed under two related assumptions. A system could be broken down into its individual components so that each component could be analyzed as an independent entity, and the components could be added in a linear fashion to describe the totality of the system.

Von Bertalanffy proposed that both assumptions were wrong. Ecological economics. Carl Jung. Carl Gustav Jung (/jʊŋ/; German: [ˈkarl ˈɡʊstaf jʊŋ]; 26 July 1875 – 6 June 1961), often referred to as C. G. Jung, was a Swiss psychiatrist and psychotherapist who founded analytical psychology.[2] Jung proposed and developed the concepts of the collective unconscious, archetypes, and extraversion and introversion. His work has been influential not only in psychiatry but also in philosophy, anthropology, archeology, literature, and religious studies.

Moralfoundations.org. Abraham maslow. 10 Questions: On Finding Your ‘Soul-Life’ in a 130-Year-Old Book. Brooke Williams and Terry Tempest Williams are two of our generation’s greatest gifts. Brooke is the author of four books, and he offers deep meditations on wilderness and wild lands, as well as working actively in defense of the pristine, most recently with the Southern Utah Wilderness Alliance. Terry is legendary for her intensely personal explorations of nature and life and the human resonance between the two, and she’s the author of the critically acclaimed Refuge: An Unnatural History of Family and Place and numerous other books.

The couple, who divide their time between Castle Valley, Utah, and Jackson, Wyoming, were in a book shop in Maine when Terry stumbled across a volume called The Story of My Heart. Recently, I caught up with the two to learn more about how and why The Story of My Heart got under their skin, and what lessons it has for us today. 1. Brooke Williams: The Story of My Heart, I believe, comes from the collective unconscious, into which Jefferies was able to tap. Richard Jefferies. John Richard Jefferies (6 November 1848 – 14 August 1887) was an English nature writer, noted for his depiction of English rural life in essays, books of natural history, and novels. His childhood on a small Wiltshire farm had a great influence on him and provides the background to all his major works of fiction. For all that, these show a remarkable diversity, including Bevis (1882), a classic children's book, and After London (1885), an early work of science fiction. For much of his adult life, he suffered from tuberculosis, and his struggles with the illness and with poverty also play a role in his writing.

Jefferies valued and cultivated an intensity of feeling in his experience of the world around him, a cultivation that he describes in detail in The Story of My Heart (1883). This work, an introspective depiction of his thoughts and feelings on the world, gained him the reputation of a nature mystic at the time. Alan Watts ~ Why Money Rules Your Life. Robert Theobald.

Robert Theobald (June 11, 1929 – November 27, 1999) was a private consulting economist and futurist author. In economics, he was best known for his writings on the economics of abundance and his advocacy of a Basic Income Guarantee. Theobald was a member of the Ad Hoc Committee on the Triple Revolution in 1964, and later listed in the top 10 most influential living futurists in The Encyclopedia of the Future. Life and work[edit] Robert Theobald was born in India in 1929, the son of a British businessman. He moved to England at age 16 (1945), and received his higher education in economics at Cambridge, then lived for three years in Paris. Jackson Katz: Violence against women—it's a men's issue. Abraham Maslow. B Corps: Firms with benefits. HE likes to do things differently. Yvon Chouinard changed his favourite sport, mountaineering, by introducing reusable pitons (the metal spikes you bang into the rock face and attach a rope to).

Climbers often used to leave pitons in the cliff, which is environmentally messy, another of Mr Chouinard's peeves. The Etherealization of Capitalism. What Is a Bodhisattva? This Graphic Shows How Americans Spend Money In Real Time. Henri Bergson. He was awarded the 1927 Nobel Prize in Literature "in recognition of his rich and vitalizing ideas and the brilliant skill with which they have been presented".[2] In 1930, France awarded him its highest honour, the Grand-Croix de la Legion d'honneur. Biography[edit] Unlocking the Spiritual and Cultural Potential of Science's Greatest Idea. From “cash only” to NFC-ready, how we buy determines what we buy.