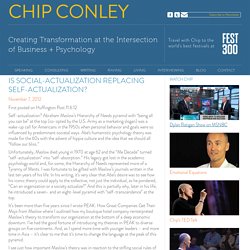 Abraham Maslow’s Hierarchy of Needs pyramid with “being all you can be” at the top (co-opted by the U.S. Army as a marketing slogan) was a wake-up call for Americans in the 1950s when personal behavior and goals were so influenced by predominant societal ways. Abe’s humanistic psychology theory was made for the 60s with the advent of hippie culture and the idea that we should all “follow our bliss.” Rebeca Hwang, YouNoodle - Social Entrepreneurs and Self-Actualization. _Wealth_Of_Networks.pdf. Bandura3.pdf. Self-efficacy. Self-efficacy is the extent or strength of one's belief in one's own ability to complete tasks and reach goals.[1] Psychologists have studied self-efficacy from several perspectives, noting various paths in the development of self-efficacy; the dynamics of self-efficacy, and lack thereof, in many different settings; interactions between self-efficacy and self-concept; and habits of attribution that contribute to, or detract from, self-efficacy. 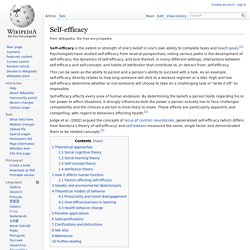 This can be seen as the ability to persist and a person's ability to succeed with a task. As an example, self-efficacy directly relates to how long someone will stick to a workout regimen or a diet. High and low self-efficacy determine whether or not someone will choose to take on a challenging task or "write it off" as impossible.

Self-efficacy affects every area of human endeavor. Here Comes Everybody. This article is about the book. 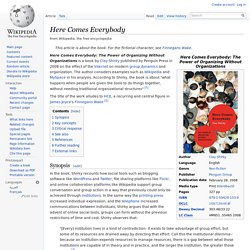 For the fictional character, see Finnegans Wake. Here Comes Everybody: The Power of Organizing Without Organizations is a book by Clay Shirky published by Penguin Press in 2008 on the effect of the Internet on modern group dynamics and organization. The author considers examples such as Wikipedia and MySpace in his analysis. According to Shirky, the book is about "what happens when people are given the tools to do things together, without needing traditional organizational structures".[1] Bandura3.pdf. When Profits Can Take a Back Seat to Doing Good. A brownie supplier to Ben & Jerry's ice cream, a skateboard maker and a payday lender are among the hundreds of existing businesses that plan to incorporate as "benefit corporations" in coming months. 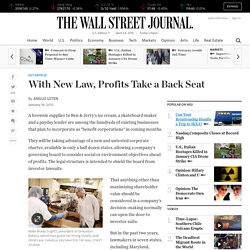 They will be taking advantage of a new and untested corporate charter, available in only a half dozen states, allowing a company's governing board to consider social or environment objectives ahead of profits. The legal structure is intended to shield the board from investor lawsuits. That anything other than maximizing shareholder value should be considered in a company's decision-making normally can open the door to investor suits.

But in the past two years, lawmakers in seven states, including Maryland, Virginia and New Jersey, passed legislation to create benefit corporations as an alternative business model. California opened up the option Jan 1. In Mr. _Wealth_Of_Networks.pdf. Handbook of Entrepreneurship and Sustainable Development Research. Should we be suspicious of the Anthropocene? – Jedediah Purdy. Officially, for the past 11,700 years we have been living in the Holocene epoch. 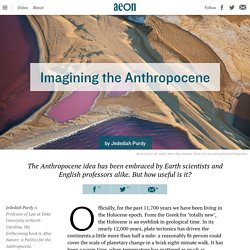 From the Greek for ‘totally new’, the Holocene is an eyeblink in geological time. In its nearly 12,000 years, plate tectonics has driven the continents a little more than half a mile: a reasonably fit person could cover the scale of planetary change in a brisk eight-minute walk. It has been a warm time, when temperature has mattered as much as tectonics. Sea levels rose 115 feet from ice melt, and northern landscapes rose almost 600 feet, as they shrugged off the weight of their glaciers. But the real news in the Holocene has been people. Popular now What will our descendants judge as our greatest sin? Why God knows more about misbehaviour than anything else. Can Benefit Corporations Work? Creating a class of ‘do good’ companies. (Courtesy of Joel Richardson) Last month, baby food company Plum Organics made a big change that many parents buying its squeezable pouches of pea puree or teething crackers may never notice. 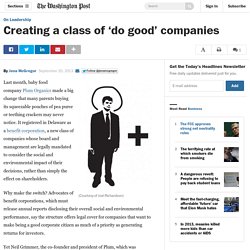 It registered in Delaware as a benefit corporation, a new class of companies whose board and management are legally mandated to consider the social and environmental impact of their decisions, rather than simply the effect on shareholders. Why make the switch? Advocates of benefit corporations, which must release annual reports disclosing their overall social and environmental performance, say the structure offers legal cover for companies that want to make being a good corporate citizen as much of a priority as generating returns for investors. Yet Neil Grimmer, the co-founder and president of Plum, which was acquired by Campbell Soup Company in June, says any potential legal advantages are even "less relevant" to his decision than the symbolic leadership benefits and communication perks. 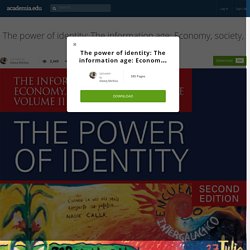 The B Corporation - Hype or Hope? So I was recently asked to share some thoughts on the rise of the B Corporation–or benefit corporation–and their role in relation both to Occupy Wall Street and possible shifts in economic thinking and ideas more generally. 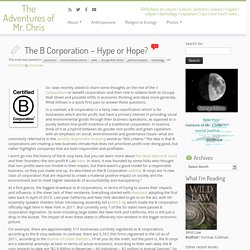 What follows is a quick first pass to answer these questions. In a nutshell, a B corporation is a fairly new classification which is for businesses which are for profit, but have a primary interest in providing social and environmental goods through their business operations, as opposed to a purely bottom-line profit incentive of a traditional corporation. In essence, think of it as a hybrid between do-gooder non-profits and green capitalism with an emphasis on social, environmental and governance issues–what are commonly referred to in the socially responsible investing world as “SEG criteria.” I won’t go into the history of the B corp here, but you can learn more about the ideas behind B corps and their founders–the non-profit B Lab–here. 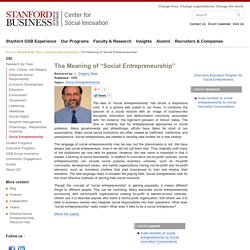 It is a phrase well suited to our times. It combines the passion of a social mission with an image of business-like discipline, innovation, and determination commonly associated with, for instance, the high-tech pioneers of Silicon Valley. The time is certainly ripe for entrepreneurial approaches to social problems.

The Power of Social Movements. Throughout history, social movements have played a powerful part in stimulating rapid periods of cultural evolution, where new sets of ideas, values, policies, or norms are rapidly adopted by large groups of people and subsequently embedded firmly into a culture. 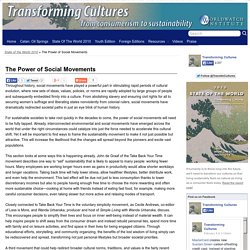 From abolishing slavery and ensuring civil rights for all to securing women’s suffrage and liberating states nonviolently from colonial rulers, social movements have dramatically redirected societal paths in just an eye blink of human history. For sustainable societies to take root quickly in the decades to come, the power of social movements will need to be fully tapped. Already, interconnected environmental and social movements have emerged across the world that under the right circumstances could catalyze into just the force needed to accelerate this cultural shift. Yet it will be important to find ways to frame the sustainability movement to make it not just possible but attractive.

Social Entrepreneurship: The Case for Definition. Social entrepreneurship is attracting growing amounts of talent, money, and attention. But along with its increasing popularity has come less certainty about what exactly a social entrepreneur is and does. As a result, all sorts of activities are now being called social entrepreneurship. Some say that a more inclusive term is all for the good, but the authors argue that it’s time for a more rigorous definition. The nascent field of social entrepreneurship is growing rapidly and attracting increased attention from many sectors. The term itself shows up frequently in the media, is referenced by public officials, has become common on university campuses, and informs the strategy of several prominent social sector organizations, including Ashoka and the Schwab and Skoll Foundation foundations.

The reasons behind the popularity of social entrepreneurship are many. Passionate Politics: Emotions and Social Movements. Redefining Success. Fair trade. Fair trade is an organized social movement whose stated goal is to help producers in developing countries achieve better trading conditions and to promote sustainability. Members of the movement advocate the payment of higher prices to exporters, as well as higher social and environmental standards.

1. Introduction Not to be confused with a book review, a literature review surveys scholarly articles, books and other sources (e.g. dissertations, conference proceedings) relevant to a particular issue, area of research, or theory, providing a description, summary, and critical evaluation of each work. The purpose is to offer an overview of significant literature published on a topic. 2. Components. 1. Why values matter. An Error Occurred Setting Your User Cookie.

An Error Occurred Setting Your User Cookie. Canadian Journal of Political Science/Revue canadienne de science politique - Abstract - <i>Modernization and Postmodernization: Cultural, Economic, and Political Change in 43 Societies</i> Ronald Inglehart Princeton: Princeton. Patrick Fournier (1998). 6 of America's 10 most charitable donors have tech backgrounds. The United States' biggest philanthropists donated nearly $9.8 billion to nonprofits in 2014, and tech entrepreneurs were among the most charitable, according to a new report. Unreasonable Institute - Boulder - Organisation à but non lucratif. Money or Meaning: What is Driving Social Innovation Today? Careers as a social entrepreneur – the dreams and reality. I was initially charmed by the term “social entrepreneurship”. Social Innovation. New social movements. The term new social movements (NSMs) is a theory of social movements that attempts to explain the plethora of new movements that have come up in various western societies roughly since the mid-1960s (i.e. in a post-industrial economy) which are claimed to depart significantly from the conventional social movement paradigm.[1] There are two central claims of the NSM theory.

Social movement. Modern Western social movements became possible through education (the wider dissemination of literature), and increased mobility of labor due to the industrialization and urbanization of 19th century societies.[1] It is sometimes argued that the freedom of expression, education and relative economic independence prevalent in the modern Western culture are responsible for the unprecedented number and scope of various contemporary social movements. Social revolution. This article is about revolution that reforms existing class structure.

Which Social Entrepreneurship Program Should You Choose? Global Momenta: Philanthropy & Social Impact Consulting Services. Exploring the Next Iteration of Social Entrepreneurship. Mic Listen to the podcast: More and more, organizations looking to have a positive social impact are realizing that philanthropic institutions can learn some lessons from those that are inspired by the profit motive. Welcome to Forbes. Welcome to Forbes. Global Forum for Business as an Agent of World Benefit at Weatherhead School of Management. The For-Benefit Enterprise.