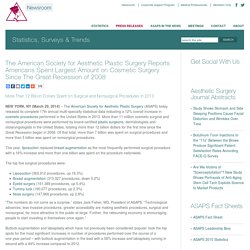 Craft and Fine Artists. Craft and fine artists use a variety of materials and techniques to create art for sale and exhibition. 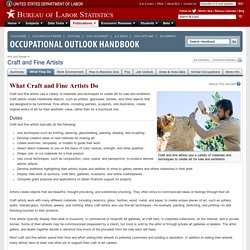 Craft and fine artists use a variety of materials and techniques to create art for sale and exhibition. Craft artists create handmade objects, such as pottery, glassware, textiles, and other objects that are designed to be functional. Tattoo Industry Facts. You know you are main stream when . . . . 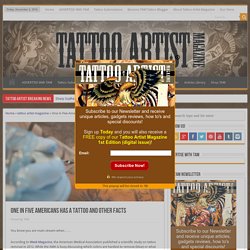 According to Week Magazine, the American Medical Association published a scientific study on tattoo removal in 2012. While the AMA is busy discussing which colors are hardest to remove (blue) or what health factors make removal the most challenging (smoking) let’s take a look at the industry from some other government agency studies. The Bureau of Labor Statistics (“BLS”) tracks the employment outlook for many careers in its Occupational Outlook Handbook (“OOH”). In short, if you want to know the employment outlook for any given industry or trade, these are the two sources to turn to.

Tattoo artists fall under the category of Craft and Fine Artists in the OOH. “Craft and fine artists use a variety of materials and techniques to create art for sale and exhibition. According to the BLS, Craft and Fine Artists’ 2012 median pay was $44,380 per year, or $21.34 per hour. All that being said, let drill down some industry facts: Tattoo Artists in the US Market Research. Industry Analysis & Industry Trends The Tattoo Artists industry has exhibited growth over the past five years, partly due to popular culture, including tattoo-related reality television programs, which have made tattoos less culturally taboo. 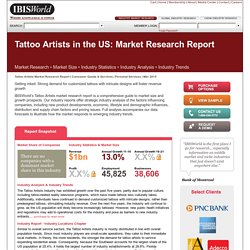 Additionally, individuals have continued to demand customized tattoos with intricate designs, rather than predesigned tattoos, stimulating industry revenue. Over the next five years, the industry will continue to grow, as the US population will likely become increasingly tattooed. However, new public heath initiatives and regulations may add to operational costs for the industry and pose as barriers to new industry entrants.... purchase to read more Industry Report - Industry Locations Chapter Similar to overall service sectors, the Tattoo Artists industry is mostly distributed in line with overall population trends.

Tattoo flash days show industry's growing popularity. By Levi Sharpe April 01, 2016 | 2:37 PM It’s like a flash sale for designer clothes, but you wear it for the rest of your life. 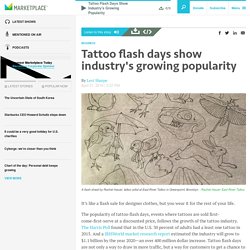 The popularity of tattoo flash days, events where tattoos are sold first-come-first-serve at a discounted price, follows the growth of the tattoo industry. The Harris Poll found that in the U.S. 30 percent of adults had a least one tattoo in 2015. And a IBISWorld market research report estimated the industry will grow to $1.1 billion by the year 2020—an over 400 million dollar increase. “I think we're really in a golden age of tattooing,” said Rachel Hauer, a tattoo artist at East River Tattoo in Greenpoint, Brooklyn. The shop is covered in art. The last flash day she put on was on Easter Sunday. Rachel Li from Queens and a friend got in line six hours early to make it first in line. “We've been to other flash events where we've been beaten by other people,” she said. Tattoo. Skin modification using ink to create designs A sailor's forearm tattooed with a rope-and-anchor drawing, against the original sketch of the design Application of a tattoo to a woman's foot A tattoo is a form of body modification where a design is made by inserting ink, dyes and pigments, either indelible or temporary, into the dermis layer of the skin to change the pigment. 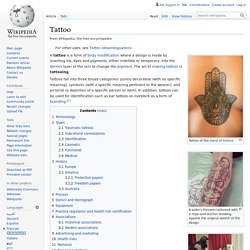 The art of making tattoos is tattooing. Tattoos fall into three broad categories: purely decorative (with no specific meaning); symbolic (with a specific meaning pertinent to the wearer); and pictorial (a depiction of a specific person or item). Terminology[edit] A Māori chief with tattoos (moko) seen by Cook and his crew (c. 1769) The word tattoo, or tattow in the 18th century, is a loanword from the Samoan word tatau, meaning "to strike".[2][3] The Oxford English Dictionary gives the etymology of tattoo as "In 18th c. tattaow, tattow. Types[edit] Traumatic tattoos[edit] Subcultural connotations[edit] Identification[edit]