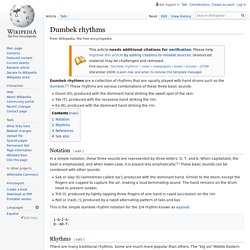 Notation[edit] In a simple notation, these three sounds are represented by three letters: D, T, and K. When capitalized, the beat is emphasized, and when lower-case, it is played less emphatically.[1] These basic sounds can be combined with other sounds: Takadimi. Takadimi is a system devised by Richard Hoffman, William Pelto, and John W. 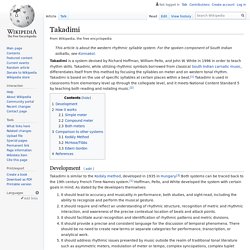 White in 1996 in order to teach rhythm skills. Takadimi, while utilizing rhythmic symbols borrowed from classical South Indian carnatic music, differentiates itself from this method by focusing the syllables on meter and on western tonal rhythm. Predominant chord. V of V in C, four-part harmony Play . 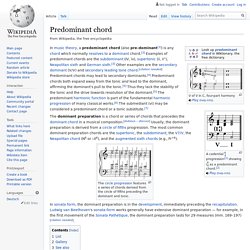 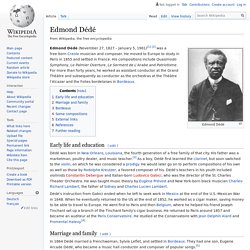 He moved to Europe to study in Paris in 1855 and settled in France. His compositions include Quasimodo Symphony, Le Palmier Overture, Le Serment de L'Arabe and Patriotisme. Sri Krishna Leela Tarangini. The composition[edit] The composition are on the life of the Hindu god Lord Krishna. 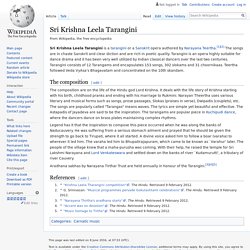 It deals with the life story of Krishna starting with his birth, childhood pranks and ending with his marriage to Rukmini. Narayan Theertha uses various literary and musical forms such as songs, prose passages, Slokas (praises in verse), Dwipadis (couplets), etc. The songs are popularly called "Tarangas" means waves. Monody. In poetry, the term monody has become specialized to refer to a poem in which one person laments another's death. 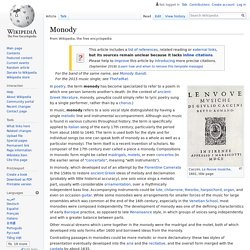 (In the context of ancient Greek literature, monody, μονῳδία could simply refer to lyric poetry sung by a single performer, rather than by a chorus.) Other musical streams which came together in the monody were the madrigal and the motet, both of which developed into solo forms after 1600 and borrowed ideas from the monody. Contrasting passages in monodies could be more melodic or more declamatory: these two styles of presentation eventually developed into the aria and the recitative, and the overall form merged with the cantata by about 1635.

The parallel development of solo song with accompaniment in France was called the air de cour: the term monody is not normally applied to these more conservative songs, however, which retained many musical characteristics of the Renaissance chanson. Sangeeta Sudha. Jaya Jaya swAmi - sourAShTram - aTa In this invocation song Poet Narayana Teertha Prays to Sree Ganesa the remover of obstacles. 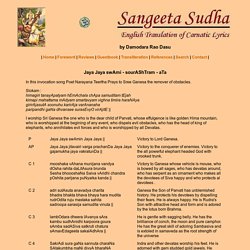 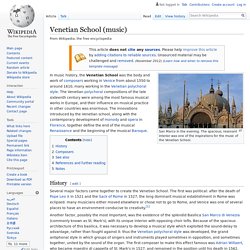 The spacious, resonant interior was one of the inspirations for the music of the Venetian School. Rank-2 temperaments with the generator close to a fifth and period an octave - Meantone temperament. Meantone temperament is a musical temperament, that is a tuning system, obtained by slightly compromising the fifths in order to improve the thirds. 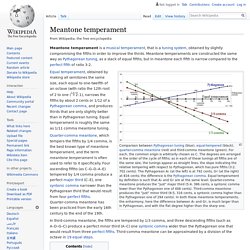 Meantone temperaments are constructed the same way as Pythagorean tuning, as a stack of equal fifths, but in meantone each fifth is narrow compared to the perfect fifth of ratio 3:2. Comparison between Pythagorean tuning (blue), equal-tempered (black), quarter-comma meantone (red) and third-comma meantone (green). For each, the common origin is arbitrarily chosen as C. The degrees are arranged in the order of the cycle of fifths; as in each of these tunings all fifths are of the same size, the tunings appear as straight lines, the slope indicating the relative tempering with respect to Pythagorean, which has pure fifths (3:2, 702 cents).

Wicki-Hayden note layout. Notes of each major scale are stacked on top of each other (in a row of two and one of three notes), putting them closer together. 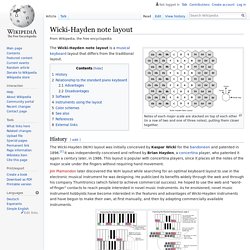 The Wicki-Hayden note layout is a musical keyboard layout that differs from the traditional layout. History[edit] The Wicki-Hayden (W/H) layout was initially conceived by Kaspar Wicki for the bandoneon and patented in 1896.[1] It was independently conceived and refined by Brian Hayden, a concertina player, who patented it again a century later, in 1986. This layout is popular with concertina players, since it places all the notes of the major scale under the fingers without requiring hand movement. Jim Plamondon later discovered the W/H layout while searching for an optimal keyboard layout to use in the electronic musical instrument he was designing. Jankó keyboard. This key layout results in each chord and scale having the same shape on the keyboard with the same fingerings regardless of key, so there is no change in geometry when transposing music.

The configuration retains the colouring of traditional keyboards (white naturals, black sharps and flats) for pedagogical purposes. For an 88-note (full size) keyboard, there would be 264 keys in total, with each note playable by three keys in vertical alignment. In the picture above, the white keys have been coloured to show how the keys are interconnected. Instead of 123 cm (48 in) the keyboard is only 89 cm (35 in) wide, and the smaller key size allows reaching wider intervals. The Jankó keyboard never achieved wide popularity. Many embodiments of this keyboard have appeared since its conception.

See also[edit] References[edit] Isomorphic keyboard. Top 10 Darbuka Rhythms. WaveLab. WaveLab is a digital audio editor and recording computer software application for Windows and macOS, created by Steinberg. WaveLab was started in 1995 and it is mainly the work of one programmer, Philippe Goutier.[1] Audio can be edited as a single file, a series of files or a multitrack "montage". It fully supports VST 2 and 3 plugins for audio processing. Cut-down versions of WaveLab are available as WaveLab Elements and WaveLab LE. Features and usage[edit] In addition to recording audio from multiple sources, WaveLab can be used for post-processing of all types of audio. See also[edit] References[edit] External links[edit]

Dumbek rhythms. Nadezhda Rimskaya-Korsakova. Nadezhda Nikolayevna Rimskaya-Korsakova Nadezhda Nikolayevna Rimskaya-Korsakova (Russian: Надежда Николаевна Римская-Корсакова née Purgold (October 19 (N.S. October 31), 1848 – May 24, 1919) was a Russian pianist and composer as well as the wife of composer Nikolai Rimsky-Korsakov. She was also the mother of Russian musicologist Andrey Rimsky-Korsakov. Life[edit] Early years[edit] Marriage[edit] L.A. Reid. Antonio Marquis "L.A. " Reid (born June 7, 1956)[1] is an American record executive, record producer, A&R representative, and panelist. He is founder and current co-chairman of Hitco Entertainment.[2] He has served as the chairman and CEO of Epic Records and The Island Def Jam Music Group, the president and CEO of Arista Records. Reid was the founder and CEO of Hitco Music Publishing and the co-founder of LaFace Records with producing partner Kenneth "Babyface" Edmonds.[3][4] He has won three Grammy Awards, picking up awards as a songwriter for songs such as Boyz II Men's "End Of The Road.

Sampling (music) A process similar to sampling originated in the 1940s with musique concrète, experimental music created by splicing, manipulating and looping tape. Music licensing. List of hip hop albums considered to be influential. This list provides a guide to the most important hip hop albums, as determined by their presence on compiled lists of significant albums: see the "Lists consulted" section for full details. Inclusion on a list is indicated by numbering after each release. La Paloma. Dumbek rhythms. Intermodulation. A frequency spectrum plot showing intermodulation between two injected signals at 270 and 275 MHz (the large spikes). Visible intermodulation products are seen as small spurs at 280 MHz and 265 MHz. Emancipation of the dissonance. Chords, featuring chromatically altered sevenths and ninths and progressing unconventionally, explored by Debussy in a "celebrated conversation at the piano with his teacher Ernest Guiraud" (Lockspeiser 1962, 207).

Société des auteurs, compositeurs et éditeurs de musique. Façade of 10 Rue Chaptal, first home of SACEM History[edit] External links[edit] Gregorian Chant Notation. This is a description of the traditional Gregorian Chant notation, so that anyone will be able to read the notation and sing it. Chant is written in neumes, which are notes sung on a single syllable.

Gregorian Chant has no meter at all, though it does have a rhythm of groups of 2 or 3 notes. Vertical lines separate musical phrases and may sometimes allow a pause for taking a breath, like. Hasta Siempre, Comandante. "Hasta Siempre, Comandante", or simply "Hasta Siempre", is a 1965 song by Cuban composer Carlos Puebla. Modern Cello Techniques. For over a century now, harmonic glissandi have been used by composers from Ravel onward. I Hear America Singing ‘Never Pay Taxes’: The Inversion ... Pages 1 - 5 - Text Version. INDIGENOUS TO THE NET. Imaging the patient with hearing loss. APOLLO. The Drifters - Wikipedia. Saxophone Transposition chart and transposing information.