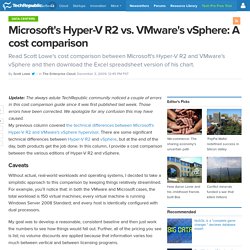 Those errors have been corrected. We apologize for any confusion this may have caused. My previous column covered the technical differences between Microsoft's Hyper-V R2 and VMware's vSphere hypervisor. There are some significant technical differences between Hyper-V R2 and vSphere, but at the end of the day, both products get the job done. In this column, I provide a cost comparison between the various editions of Hyper-V R2 and vSphere. Caveats Without actual, real-world workloads and operating systems, I decided to take a simplistic approach to this comparison by keeping things relatively streamlined.

My goal was to develop a reasonable, consistent baseline and then just work the numbers to see how things would fall out. Principled_technologies_vmware_vs_microsoft_tco.pdf. “You Can’t Buy Hyper-V” How much is Hyper-V? 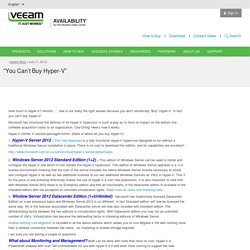 Hmmm….. free is not really the right answer because you don’t technically “Buy” Hyper-V. In fact you can’t buy Hyper-V! Microsoft has structured the delivery of its Hyper-V hypervisor in such a way as to have no impact on the bottom line software acquisition costs to an organization. HyperV VMware Cost Comparison Jan2010. Hyper-V overview. Updated: March 31, 2015 Applies To: Windows Server 2012 R2, Windows Server 2012 This topic describes the Hyper-V role in Windows Server, practical uses for the role, the most significant new or updated functionality in this version compared to previous versions of Hyper-V, hardware requirements, and a list of operating systems (known as guest operating systems) supported for use in a Hyper-V virtual machine. 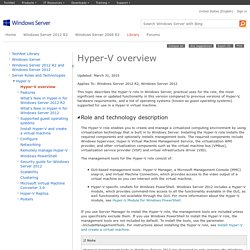 The Hyper-V role enables you to create and manage a virtualized computing environment by using virtualization technology that is built in to Windows Server. VMware versus Hyper-V storage comparison. VMware’s vSphere and Microsoft’s Hyper-V are the two leading platforms for server virtualization. 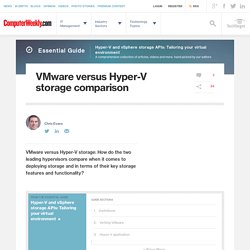 Although they provide similar features and functionality, the way they manage storage for virtual machines is very different. In this article, we ask: VMware versus Hyper-V: how do they deploy storage and what storage features and functionality are found in the two hypervisor platforms? Hypervisor fundamentals vSphere ESXi (currently at release 5.5 update 1) is a type 1 hypervisor and is based on what VMware describes as a “vmkernel” or microkernel used to run the features needed to support virtualization. Type 1 hypervisors run directly on server hardware and act as the abstraction layer between the physical resources of the server and the virtual resources assigned to the virtual machine. Virtual machine files A virtual machine is encapsulated in a number of files that represent both the configuration and contents of the virtual server. VMDKs “grow” by adding VMDK file extents.

File systems. VMware vs. Hyper-V licensing and pricing exposé. Like the Red Sox vs. 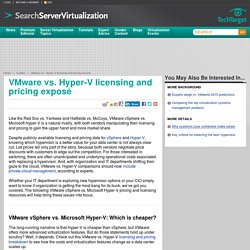 Yankees and Hatfields vs. McCoys, VMware vSphere vs. Microsoft Hyper-V is a natural rivalry, with both vendors manipulating their licensing and pricing to gain the upper hand and more market share. Despite publicly available licensing and pricing data for vSphere and Hyper-V, knowing which hypervisor is a better value for your data center is not always clear cut. List prices tell only part of the story, because both vendors negotiate price discounts with customers to edge out the competition.

Whether your IT department is exploring new hypervisor options or your CIO simply want to know if organization is getting the most bang for its buck, we’ve got you covered. Virtualization Wars: VMware vs. Hyper V: Which is Right For Your... Editor’s note: This article was originally published in May of 2013. 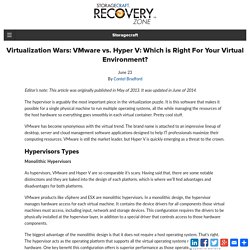 It was updated in June of 2014. The hypervisor is arguably the most important piece in the virtualization puzzle. It is this software that makes it possible for a single physical machine to run multiple operating systems, all the while managing the resources of the host hardware so everything goes smoothly in each virtual container. Pretty cool stuff. VMware has become synonymous with the virtual trend. Hypervisors Types Monolithic Hypervisors As hypervisors, VMware and Hyper V are so comparable it’s scary. VMware products like vSphere and ESX are monolithic hypervisors. The biggest advantage of the monolithic design is that it does not require a host operating system. Now to the drawbacks. Speaking of security, it happens to be one of VMware’s most pressing challenges to date. Virtualization showdown: Microsoft Hyper-V 2012 vs. VMware vSphere 5.1. [ Editor's note: This article has been revised to underscore the fact that we tested VMware vSphere with vCenter Server but we tested Windows Server 2012 Hyper-V without System Center 2012, and therefore these reviews do not constitute a straightforward comparison. ] Any comparison of Microsoft's Hyper-V versus VMware's vSphere has to take into consideration a number of different factors. 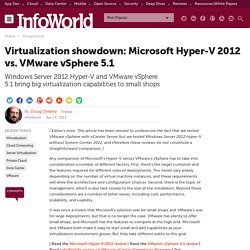 First, there's the target customer and the features required for different sizes of deployments. The needs vary widely depending on the number of virtual machine instances, and these requirements will drive the architecture and configuration choices. VMware Virtualization Products for Virtual Servers, Virtual Desktops, and Data Center. Virtualization for your modern datacenter and hybrid cloud. Did you know that Hyper-V has had four times the growth of VMware's ESX over the past three years? 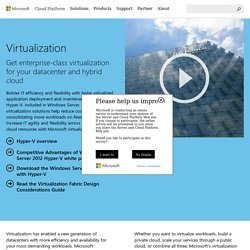 As such, virtual machine migration is an increasing priority for many customers as more and more are exploring and evaluating the Microsoft platform against their existing VMware installed base. Whether it's virtual to virtual (from one hypervisor to another) or physical to virtual, migration provides a path for consolidation of workloads and services, and the foundation for cloud.