Cinnamon Oil. Autoimmune Diseases. Thyme. Stuff. Food Cravings. Zinc. Castor oil plant. Its seed is the castor bean, which, despite its name, is not a true bean. 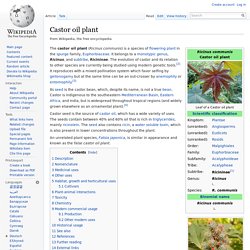 Castor is indigenous to the southeastern Mediterranean Basin, Eastern Africa, and India, but is widespread throughout tropical regions (and widely grown elsewhere as an ornamental plant).[4] Castor seed is the source of castor oil, which has a wide variety of uses. The seeds contain between 40% and 60% oil that is rich in triglycerides, mainly ricinolein. The seed also contains ricin, a water soluble toxin, which is also present in lower concentrations throughout the plant. An unrelated plant species, Fatsia japonica, is similar in appearance and known as the false castor oil plant.

Description[edit] Female (top) and male flowers The glossy leaves are 15–45 centimetres (5.9–17.7 in) long, long-stalked, alternate and palmate with 5–12 deep lobes with coarsely toothed segments. The green capsule dries and splits into three sections, forcibly ejecting seeds Nomenclature[edit] Medicinal uses[edit] Other uses[edit] Astralagus. Gold formations. Casual Marijuana Smoking Not Harmful to Lungs. It wouldn't have mattered if Bill Clinton inhaled, as far as his lungs are concerned. 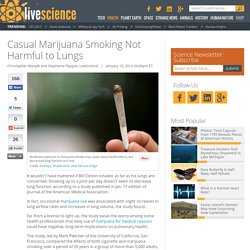 Smoking up to a joint per day doesn't seem to decrease lung function, according to a study published in Jan. 11 edition of Journal of the American Medical Association. In fact, occasional marijuana use was associated with slight increases in lung airflow rates and increases in lung volume, the study found. Far from a license to light up, the study eases the worry among some health professionals that daily use of marijuana for medical reasons could have negative, long-term implications on pulmonary health. The study, led by Mark Pletcher of the University of California, San Francisco, compared the effects of both cigarette and marijuana smoking over a period of 20 years in a group of more than 5,000 adults, part of a longitudinal study called Coronary Artery Risk Development in Young Adults (CARDIA). Not so with marijuana. 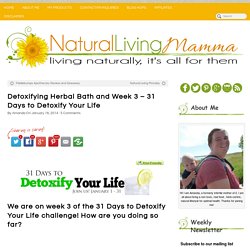 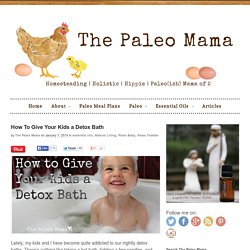 There’s nothing like taking a hot bath, lighting a few candles, and allowing the troubles of the day to simmer away. This is my ultimate way to unwind. Kids benefit from the nightly ritual, as well. Benefits and Uses for Epsom Salt. Epsom salts are one of those things I’d always heard about and seen at the drug store, but never really bothered to look into for some reason. 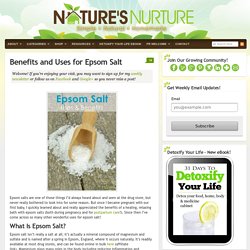 But once I became pregnant with our first baby, I quickly learned about and really appreciated the benefits of a healing, relaxing bath with epsom salts (both during pregnancy and for postpartum care!). Since then I’ve come across so many other wonderful uses for epsom salt! The Remarkable Health Benefits of Epsom Salt Baths. Epsom salts have been used by many different cultures for hundreds of years. 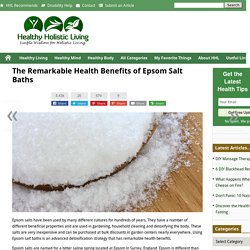 They have a number of different beneficial properties and are used in gardening, household cleaning and detoxifying the body. These salts are very inexpensive and can be purchased at bulk discounts in garden centers nearly everywhere. Using Epsom salt baths is an advanced detoxification strategy that has remarkable health benefits. Epsom salts are named for a bitter saline spring located at Epsom in Surrey, England.

6 Food Cravings you should never ignore - Butter Nutrition. Who doesn’t have food cravings? 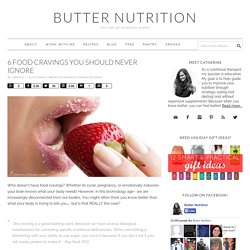 Whether its cycle, pregnancy, or emotionally induced– your brain knows what your body needs! However, in this technology age– we are increasingly disconnected from our bodies. You might often think you know better than what your body is trying to tell you… but is that REALLY the case? Fat cravings: Do you have enough healthy saturated fat in your diet? The Many Benefits of Ginger - The Paleo Mama. Ginger has been used medicinally for centuries and in the U.S. is perhaps most known for its ability to soothe nausea and stomach upset. 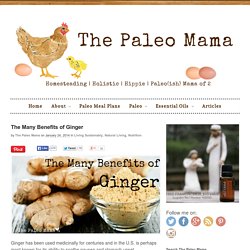 It is without a doubt the best remedy I know of for nausea. You don’t need much just a piece the size of your fingernail minced very finely and swallowed. It is phenomenally effective. But now new research suggests this natural root may provide help for much more, including for arthritis pain, heart health, and people with asthma, in whom ginger may enhance the effects of the bronchodilating medications conventionally used to treat their condition. It may even be useful for weight control! An Introduction to Kundalini. 14th January 2015 By Wes Annac Guest Writer for Wake Up World Let’s take a look at kundalini, which is essentially an evolutionary/energetic ‘boost’ we can gain with focused, meditative effort. 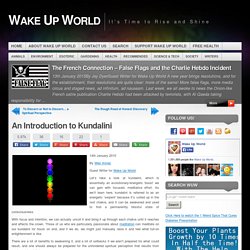 As we’ll learn here, kundalini is referred to as an energetic ‘serpent’ because it’s coiled up in the root chakra, and it can be awakened and used to find a permanently blissful state of consciousness. With focus and intention, we can actually uncoil it and bring it up through each chakra until it reaches and affects the crown. Unhealthy Food Cravings are a Sign of Mineral Deficiencies. Most of us have, at one point in our lives, experienced intense cravings for unhealthy foods. 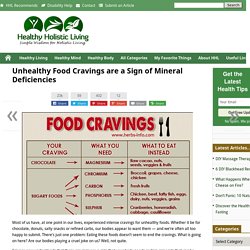 Whether it be for chocolate, donuts, salty snacks or refined carbs, our bodies appear to want them — and we’re often all too happy to submit. There’s just one problem: Eating these foods doesn’t seem to end the cravings.