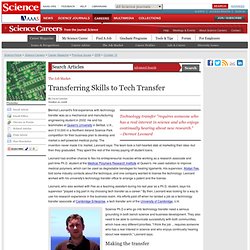 He and his teammates at Queen's University in Belfast, U.K., won £10,000 in a Northern Ireland Science Park competition for their business plan to develop and market a self-powered medical pump. The invention never made it to market, Leonard says: The team took a half-hearted stab at marketing their idea--but then they graduated. They spent the rest of the money paying off student loans. Leonard had another chance to flex his entrepreneurial muscles while working as a research associate and part-time Ph.D. student at the Medical Polymers Research Institute at Queen's. He used radiation to improve medical polymers, which can be used as degradable bandages for healing ligaments. Leonard, who also worked with Fee as a teaching assistant during his last year as a Ph.D. student, says his supervisor "played a big part in my choosing tech transfer as a career. " The changing face of corporate venturing in biotechnology : Article : Bioentrepreneur. 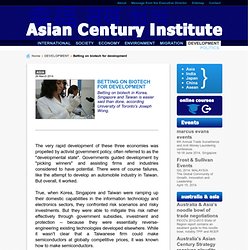 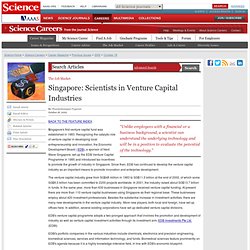 Recognizing the catalytic role of venture capital in developing local entrepreneurship and innovation, the Economic Development Board ( EDB), a sponsor of Next Wave Singapore, set up the EDB Venture Capital Programme in 1985 and introduced tax incentives to promote the growth of industry in Singapore. Since then, EDB has continued to develop the venture capital industry as an important means to promote innovation and enterprise development. The venture capital industry grew from SG$48 million in 1983 to SG$11.5 billion at the end of 2000, of which some SG$8.5 billion has been committed to 2200 projects worldwide.

In 2001, the industry raised about SG$13.7 billion in funds. In the same year, more than 630 businesses in Singapore received venture capital funding. Lily Chan, Ph.D., is the general manager of LSI. Academia and Big pharmas roles in drug discovery: A new model. Working in Asia: The siren song of Singapore : Naturejobs. Agency for Science Technology and Research (A*STAR) > About A*STAR > Biomedical Research Council > BMS Initiative. The Singapore Biomedical Sciences (BMS) initiative was launched in June 2000 to develop the Biomedical Sciences cluster as one of the key pillars of Singapore's economy, alongside Electronics, Engineering and Chemicals. 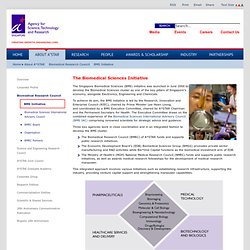 To achieve its aim, the BMS initiative is led by the Research, Innovation and Enterprise Council (RIEC), chaired by Prime Minister Lee Hsien Loong, and coordinated by a BMS Executive Committee, chaired by A*STAR Chairman and the Permanent Secretary for Health. The Executive Committee draws on the combined experience of the Biomedical Sciences International Advisory Council (BMS IAC) comprising renowned scientists for strategic advice and guidance. Naturejobs (2005): Making it in the biotech business. Being good at research isn't enough for success in the biotech business. 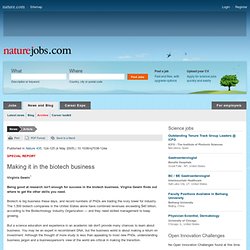 Virgina Gewin finds out where to get the other skills you need. Biotech is big business these days, and record numbers of PhDs are trading the ivory tower for industry. The 1,500 biotech companies in the United States alone have combined revenues exceeding $40 billion, according to the Biotechnology Industry Organization — and they need skilled management to keep growing. But a science education and experience in an academic lab don't provide many chances to learn about business. Naturejobs (2007): Skills for translating science into business. The right kind of postgraduate training could help you to realize biotech's potential as well as your own. 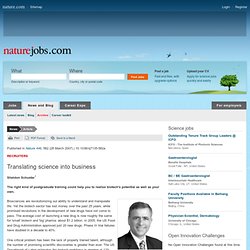 Sheldon Schuster Biosciences are revolutionizing our ability to understand and manipulate life. Yet the biotech sector has lost money over the past 25 years, while promised revolutions in the development of new drugs have not come to pass. The average cost of launching a new drug is now roughly the same for 'small' biotech and 'big' pharma: about $1.2 billion. In 2005, the US Food and Drug Administration approved just 20 new drugs. One critical problem has been the lack of properly trained talent, although the number of promising scientific discoveries is greater than ever. "Because the industry is experiencing such rapid growth," a department report notes, "biotechnology firms often demand more skilled workers than are available and are projected to need more workers than are currently enrolled in training programs. " Naturejobs (2011):Tips on starting a business in science. If you were planning to use your research to launch a start-up company, would you expect to be the CEO? 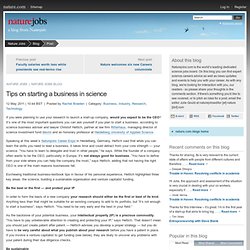 It’s one of the most important questions you can ask yourself if you plan to start a business, according to science business adviser and lawyer Christof Hettich, partner at law firm Ritterhaus, managing director of science investment fund dievini and an honorary professor at Heidelberg University of Applied Science. Naturejobs (2004): How to succeed in business. 2013 In Shift, Australia Would End R&D Tax Breaks for Big Firms to Fund New Innovation Networks. The Australian government is proposing to spend AUD $500 million over 4 years to establish and support up to 10 "Industry Innovation Precincts" that will create collaborations between academic, government, and industry researchers to commercialize promising discoveries. 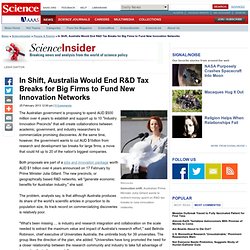 At the same time, however, the government wants to cut AUD $1billion from research and development tax breaks for large firms, a move that could hit up to 20 of the nation's biggest companies. Both proposals are part of a jobs and innovation package worth AUD $1 billion over 4 years announced on 17 February by Prime Minister Julia Gillard. The new precincts, or geographically based R&D networks, will "generate economic benefits for Australian industry," she said.

The problem, analysts say, is that although Australia produces its share of the world's scientific articles in proportion to its population size, its track record on commercializing discoveries is relatively poor. 'Clever country my arse' Pressure is building for the federal government to overhaul the way science is funded in Australia, with the country's leading researchers describing current arrangements as inadequate, inefficient and lacking focus. 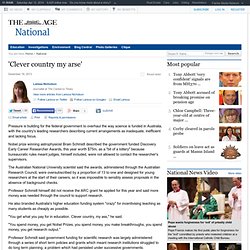 Nobel prize winning astrophysicist Brain Schmidt described the government funded Discovery Early Career Researcher Awards, this year worth $75m, as a "bit of a lottery" because bureaucratic rules meant judges, himself included, were not allowed to contact the researcher's supervisors. Science Business: What Happened to Biotech? Thirty years ago it appeared as if biotech would not only revolutionize healthcare, but also radically improve the very process of R&D itself. 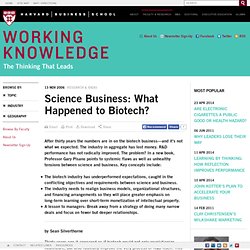