10 Ways to Protect Coral Reefs Perth Western Australia. If you dive or snorkel – Take only photos and leave only bubbles! 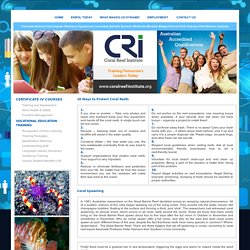 Keep your fins, equipment, and hands off the coral reefs. A single touch can kill live corals. Recycle – keeping trash out of oceans and landfills will assist in the water quality. Conserve Water – the less water you use, the less wastewater eventually finds its way back to the ocean. How to Take Action to Save Coral Reefs: 10 Steps.

Scientists search Palau's coral reefs for new anti-cancer drugs. You need chemicals to fight cancer, and chemists have spent decades working on molecules they hope will fight everything from breast cancer to prostate cancer. 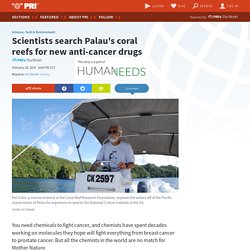 But all the chemists in the world are no match for Mother Nature. David Newman, who heads the Natural Products branch at the National Cancer Institute (NCI) in Frederick, Maryland, says Mother Nature “has been doing her chemistry for three billion years," while chemists have been at work for less than 300. Newman himself has spent the last three decades “persuading molecules to come out from strange sources" — sources like tropical plants from Madagascar, marine sponges from the Indo-Pacific, and even microbes. The reason for all his “persuasion” is that most organisms use chemistry to defend themselves against all kinds of threats, from the sun’s radiation to parasites.

NCI contract researcher Matthew Harris says the result is “molecules that we couldn’t have dreamed of.” “We go wherever the human body can go,” Colin says. NOAA's Coral Reef Conservation Program: What You Can Do. Even if you don't live near a reef, you can help protect coral reefs in the U.S. and around the world. 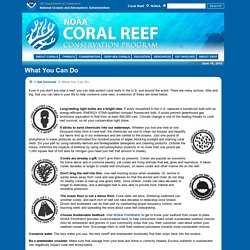 There are many actions, little and big, that you can take in your life to help conserve coral rees; a selection of these are listed below. Long-lasting light bulbs are a bright idea. If every household in the U.S. replaced a burned-out bulb with an energy-efficient, ENERGY STAR-qualified compact fluorescent bulb, it would prevent greenhouse gas emissions equivalent to that from at least 800,000 cars. Climate change is one of the leading threats to coral reef survival, so let your conservation light shine.

It stinks to send chemicals into our waterways. Doctoral Degree Programs in Florida. Coral reefs: importance. NOAA National Ocean Service Education: Corals. Coral reefs are some of the most diverse and valuable ecosystems on Earth. 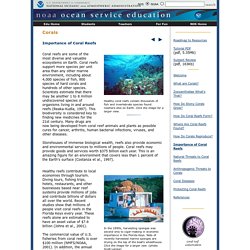 Coral reefs support more species per unit area than any other marine environment, including about 4,000 species of fish, 800 species of hard corals and hundreds of other species. Scientists estimate that there may be another 1 to 8 million undiscovered species of organisms living in and around reefs (Reaka-Kudla, 1997). This biodiversity is considered key to finding new medicines for the 21st century.

CORAL REEF DESTRUCTION and CONSERVATION Ten percent of the world's reefs have been completely destroyed. In the Philippines, where coral reef destruction is the worst, over 70% have been destroyed and only 5% can be said to be in good condition. What has happened to destroy so many reefs? Human population has become very large, and earth is warming. There are two different ways in which humans have contributed to the degradation of the Earth's coral reefs, indirectly and directly. Warming of the ocean causes corals to sicken and die. This mountainous star coral, Montastraeaa faveolata, from Panama has started to bleach. The direct way in which humans destroy coral reefs is by physically killing them. 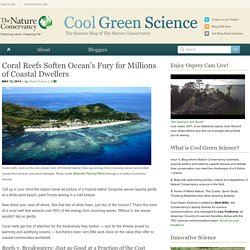 Photo credit: Malcolm Peacey/Flickr through a Creative Commons license. Call up in your mind the classic travel ad picture of a tropical island: turquoise waves lapping gently at a white sand beach, palm fronds waving in a mild breeze. Now direct your view off shore. See that line of white foam, just shy of the horizon? Coral reefs get lots of attention for the biodiversity they harbor — and for the threats posed by warming and acidifying oceans — but there’s been very little work done on the value they offer to coastal communities worldwide. Reefs v. A group of researchers, including the Conservancy’s Michael Beck and Christine Shepard, combed the literature on corals and wave breaking.