Maxx Audio Visual: Triangle Altea Ex review. Here’s some French fare to tempt those in the market for a pair of fuss-free floorstanders.TRIANGLE ALTEA Ex WHAT THEY ARE: Floodstanding speakers LUST FACTOR: Verve and bass heft. 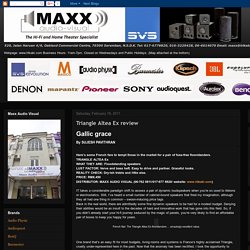 Easy to drive and partner. Graceful looks. REALITY CHECK: Dry-ish treble and little else. PRICE: RM8,499 DISTRIBUTOR: MAXX AUDIO VISUAL (06-762 0811/017-677 8820/ website: www.htkaki.com) IT takes a considerable paradigm shift to assess a pair of dynamic loudspeakers when you’re so used to ribbons or electrostatics. One brand that’s an easy fit for most budgets, living rooms and systems is France’s highly acclaimed Triangle, cruelly under-represented here in the past.

Cognac or wine? The manner in which the Altea’s cabinet is decoupled from the floor is unique, at least for the price – a four-point plinth is provided to stand the speaker firm, and the massive screws can be adjusted from atop the platform to level the cabinet. Specifications: SoundStage! Hi-Fi. Details Written by Aron Garrecht Aron Garrecht Category: Full-Length Equipment Reviews Full-Length Equipment Reviews Created: 01 October 2011 01 October 2011 Note: Measurements taken in the anechoic chamber at Canada's National Research Council can be found through this link. 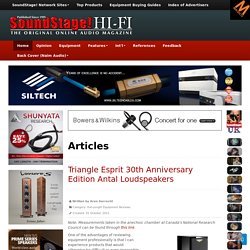 One of the advantages of reviewing equipment professionally is that I can experience products that would otherwise be difficult or even impossible for me to hear. Based in the small town of Soissons, Triangle Manufacture Electroacoustique has, over 31 years, earned a reputation for class and distinction with its entirely in-house designing, testing, and building of high-quality loudspeakers. La conception Even as I removed the Esprit Antal AEs from their substantial double-boxed packaging, I knew that these speakers were special -- so special that merely looking at them provided me with more questions than answers. La musique I began my listening sessions by cueing up "The Thrill Is Gone," from B.B. La concurrence . . . Triangle Antal Ex review. Through careful study and analysis of what, in its opinion, was missing in existing speaker design, French company Triangle prided itself on creating a brand with its own unique sonic identity. 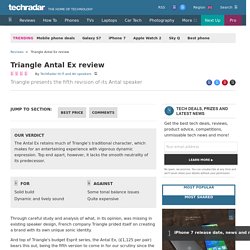 And top of Triangle's budget Esprit series, the Antal Ex, (£1,125 per pair) bears this out, being the fifth version to come in for our scrutiny since the turn of the century. But the price has been steadily creeping up, with a 13 per cent increase in little more than a year. Triangle's brochure justifies this decision with what it describes as a number of engineering improvements. That said, this is still plenty of speaker for the money, with four drive units in a solidly built enclosure with three internal bracing panels, sitting on a proper damped steel plinth. However, it looks more purposeful than pretty, with a slight curved front panel, painted dark charcoal with rather prosaic vinyl woodprint elsewhere. Sound quality. Triangle Antal EX. The complicated, horn loaded tweeter of the Antal, complete with phase plug, looks unusual but provides a good result our frequency response analysis shows. 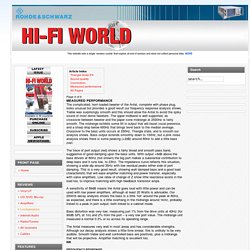 Treble was surprisingly smooth and this should allow the Antal to avoid the spiky sound of most dome tweeters. The upper midband is well supported, as crossover between tweeter and the paper cone midrange at 2500Hz is fairly smooth. The midrange exhibits some lift in output that will boost vocal presence, and a sharp drop below 600Hz that brings level back to the median average.

Crossover to the bass units occurs at 250Hz, Triangle state, and is smooth our analysis shows. Bass output extends smoothly down to 100Hz, but a pink noise analysis shows there is some peaking (+2dB) around 80Hz to add a little bass zest. The trace of port output (red) shows a fairly broad and smooth pass band, suggestive of good damping upon the bass units. The Antal measures very well in most areas and has considerable strengths. Green - driver output. 2007 10 EspritEx Antal FR.