NewsX - India's Best English News Channel of the year 2014. Get the latest news and today's top headlines from India and across the World.

Irrfan releases first look of his banned Bangladeshi film. Japan to pay damages to Okinawans hit by US jets' noise - NewsX. A Japanese court on Thursday ordered the central government to pay over $260 million in compensation to residents living near a US airbase in Okinawa over aircraft noise. 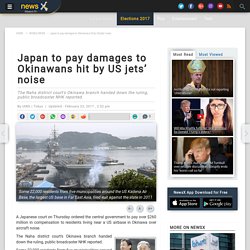 The Naha district court’s Okinawa branch handed down the ruling, public broadcaster NHK reported. Some 22,000 residents from five municipalities around the US Kadena Air Base, the largest US base in Far East Asia, filed suit against the state in 2011. They demanded compensation for damages and the suspension of flights during the night and early morning. US President Donald Trump revokes Obama guidelines on transgender bathrooms - NewsX.

US President Donald Trump reversed a regulation proclaimed by Barack Obama, obligating public schools around the country to allow transgender students to use the bathrooms and dressing rooms they prefer according to the gender with which they identify. 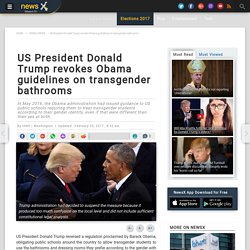 Attorney General Jeff Sessions on Wednesday announced in a statement that the Trump administration had decided to suspend the measure because it produced too much confusion on the local level and did not include sufficient constitutional legal analysis, Efe news reported. The reversal of the rule now leaves it up to states and school districts to interpret whether federal sex discrimination law applies to gender identity. In May 2016, the Obama administration had issued guidance to US public schools requiring them to treat transgender students according to their gender identity, even if that were different than their sex at birth. According to CBS News, Sessions reportedly believes that the matter is a legal issue, not a policy issue. At least 7 dead, 17 injured after deadly blast rocks commercial building in Lahore, Pakistan - NewsX. UCL: Sevilla manage 2-1 win over Leicester City - NewsX. Sevilla dominated nearly all of their UEFA Champions League first-leg football tie against Leicester City before Jamie Vardy gave the visitors a vital equaliser in the away game, which the Spanish club won 2-1. 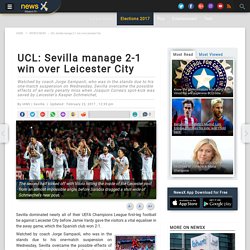 Watched by coach Jorge Sampaoli, who was in the stands due to his one-match suspension on Wednesday, Sevilla overcame the possible effects of an early penalty miss when Joaquin Correa’s spot-kick was saved by Leicester’s Kasper Schmeichel, reports Xinhua news agency. Sergio Escudero’s shot also was well-saved by the Leicester goalkeeper, before the home side took the lead through a fine header from Pablo Sarabia. Escudero found space on the left and Sarabia was able to attack the ball, which went off the post. Schmeichel had to be alert a minute later after Stefan Jovetic’s long range effort took a wicked deflection and was on the point of dropping into his net. MS Dhoni travels in train after 13 years for Vijay Hazare Trophy - NewsX. A couple of days after the cricketing world was abuzz with the news of Mahendra Singh Dhoni’s removal as the skipper of IPL franchise Rising Pune Supergiants, the just-appointed Jharkhand skipper, in his typical unfazed avatar, regaled his teammates with stories from the past in a rare train journey from Ranchi to Howrah station to take part in the Vijay Hazare Trophy. 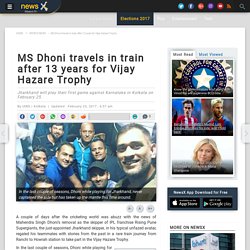 In the last couple of seasons, Dhoni while playing for Jharkhand, never captained the side but has taken up the mantle this time around. It was learnt that the state association pushed the envelope to make him skipper again. Lionel Messi is one win away from his 400th for Barcelona - NewsX. Argentine football star Lionel Messi is just one win away from reaching 400 victories with Barcelona, when the team visits the Vicente Calderon on Sunday to play against hosts Atletico Madrid in La Liga round 24. 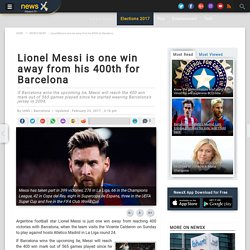 If Barcelona wins the upcoming tie, Messi will reach the 400 win mark out of 565 games played since he started wearing Barcelona’s jersey in 2004. During that period, Messi has taken part in 399 victories, 276 in La Liga, 66 in the Champions League, 42 in Copa del Rey, eight in Supercopa de Espana, three in the UEFA Super Cup and five in the FIFA Club World Cup. The Argentine forward has played in 102 draws and suffered 64 defeats. Atletico Madrid was the team to concede most goals scored by Messi with a total of 26 (21 in La Liga and five in Copa del Rey), followed by Real Madrid and Sevilla, conceding 21 goals each.

India vs Australia 1st Test, Day 1: Australia 256/9 in 94 overs at stumps - NewsX. Australian skipper Steven Smith won the toss and elected to bat against India in the opening match of their four-match Test series. 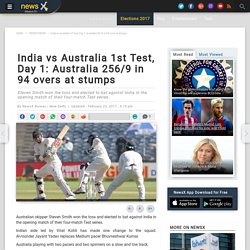 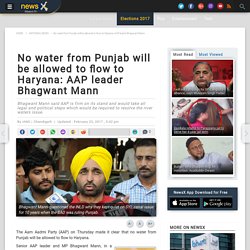 Senior AAP leader and MP Bhagwant Mann, in a statement here, said the AAP, which he said is expected to form government in Punjab, would not allow any water to flow to Haryana because Punjab has no extra water. “The AAP is firm on its stand and would take all legal and political steps which would be required to resolve the river waters issue,” Mann said. Cautioning the people of Punjab and Haryana against the “dangerous designs of the Shiromani Akali Dal (SAD) and the Indian National Lok Dal (INLD) who are blowing the issue of Satluj Yamuna Link (SYL) canal out of proportion to create law and order problem for political motives”, Mann said the INLD call for digging of the SYL canal was politically motivated.

Mann questioned the INLD why they kept quiet on SYL canal issue for 10 years when the SAD was ruling Punjab. Thousands stuck in traffic after police seals Haryana-Punjab border - NewsX. Thousands of people, especially motorists, faced inconvenience on Thursday morning after security forces sealed a busy portion of a national highway on the Haryana-Punjab border that links Delhi with Amritsar. 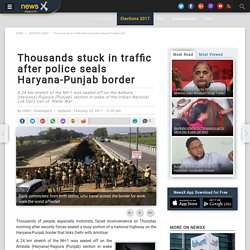 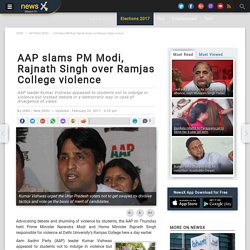 Aam Aadmi Party (AAP) leader Kumar Vishwas appealed to students not to indulge in violence but instead debate in a democratic way in case of divergence of views. “If anti-national slogans are raised inside campuses of universities and colleges, which churn out talented personalities, it is the failure of the Prime Minister and the Home Minister,” Vishwas said. Referring to the Jawaharlal Nehru University (JNU) incident where anti-national slogans were raised in February last year, the AAP leader said Modi should take responsibility since the real culprits have still not been identified and arrested. Won't accept unilaterally imposed US immigration provisions: Mexico - NewsX. Mexico’s Foreign Secretary Luis Videgaray said ahead of talks with senior officials from the United States that his country would not accept immigration provisions that are unilaterally imposed by its northern neighbour. 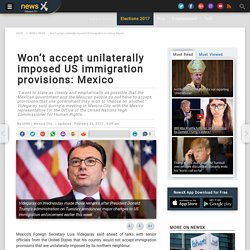 Videgaray on Wednesday made those remarks after President Donald Trump’s administration on Tuesday announced major changes to US immigration enforcement earlier this week, Efe news reported. “I want to state as clearly and emphatically as possible that the Mexican government and the Mexican people do not have to accept provisions that one government may wish to impose on another,” Videgaray said during a meeting in Mexico City with the Mexico representative for the Office of the United Nations High Commissioner for Human Rights. “We’re not going to accept that because there’s no reason for us to do so and because it’s not in Mexico’s interest,” he added. Maharashtra Civic Elections Results: Shiv Sena leads with 84 seats, BJP biggest gainer; Congress, MNS wiped out - NewsX.

The counting of India’s largest and richest civic body Brihanmumbai Municipal Corporation (BMC) along with nine others is underway. Millions of voters had exercised their franchise on Tuesday in Maharashtra. At close of balloting in the evening, an estimated 55% of Mumbai’s 9.2 million (92 lakh) electorate had voted, making it the highest turnout for any elections since 1991. All focus on the contest is between Shiv Sena and BJP, who for the first time in 25 years have decided to contest solo this time. Uttar Pradesh Assembly elections: Voting in 53 constituencies in the fourth phase of polling ends - NewsX. Voting in 53 assembly constituencies in the fourth phase of seven-phase election in Uttar Pradesh elections begins on Thursday.

Over 1.80 crore voters will use their franchise in the tight contest between the Samajwadi Party (SP)-Congress alliance, Bharatiya Janata Party (BJP) and the Bahujan Samaj Party (BSP). Parliamentary constituency of Congress chief Sonia Gandhi, Rae Bareli, is also voting in this phase. It is for the first time since 1998 that Sonia Gandhi has not campaigned in an election.

‘World’s Tallest Statue’ or ‘Most Destructive Construction’? Shivaji statue in Mumbai lands on divided shore - NewsX. With the Mumbai government reportedly mulling the initiation of the construction of world’s tallest statue, the city is divided on whether the construction portends any positive changes for the people working on the shores. It is being reported that the Indian government might spend around 3,600 crore rupees ($530 million) on the memorial of 17th century Hindu king Chhatrapati Shivaji. The Koli community fears that the construction of the world’s tallest structure may drastically affect their livelihood. The Shivaji statue, at 190 metres, will be twice the height of America’s Statue of Liberty and will be almost 40 metres taller than the statue of Buddha in China. The fishing community in Mumbai, which is apprehensive about the rippling effect of this massive construction, have accepted this as an unequivocal fact that the construction will destroy the marine life.

UP polls 2017: Akhilesh Yadav afraid of donkeys, says PM Modi - NewsX. Ahead of the fifth phase of poling in Uttar Pradesh, Prime Minister Narendra Modi on Thursday addressed a rally in Bahraich district. Taking a jibe at UP chief minister, PM Modi said that Akhilesh Yadav was afraid of him. He also said that the people of this country are his master and he takes inspiration from the donkey because he works for the people day and night. Mayawati retorts to Amit Shah's 'Kasab' jibe; calls BJP president the 'biggest Kasab' - NewsX. Bahujan Samaj Party (BSP) supremo Mayawati retorted to Amit Shah’s ‘Kasab’ jibe by labelling him as the “biggest Kasab of all”. On Wednesday, Bhartiya Janata Party (BJP) president Amit Shah had come up with an acronym for “KASAB”, deconstructing the 26/11 terrorist’s name to make it stand for the Congress, Samajwadi Party and the BSP. “Until Uttar Pradesh gets rid of K-A-S-A-B, there will be no development in the state.