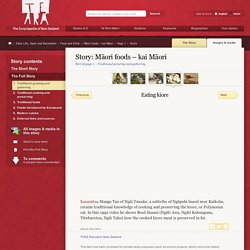 In this 1992 video he shows Brad Haami (Ngāti Awa, Ngāti Kahungunu, Tūwharetoa, Ngāi Tahu) how the cooked kiore meat is preserved in fat. About this item TVNZ Television New Zealand This item has been provided for private study purposes (such as school projects, family and local history research) and any published reproduction (print or electronic) may infringe copyright law. It is the responsibility of the user of any material to obtain clearance from the copyright holder.

How to cite this page: Charles Royal and Jenny Kaka-Scott. Maori Hangi - Guide to how to make a Hangi. A hāngi is a traditional Māori style of cooking which is still commonly practiced throughout New Zealand today. 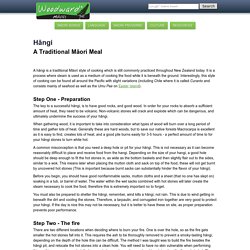 It is a process where steam is used as a medium of cooking the food while it is beneath the ground. Interestingly, this style of cooking can be found all around the Pacific with slight variations (including Chile where it is called Curanto and consists mainly of seafood as well as the Umu Pae on Easter Island). Step One - Preparation The key to a successful hāngi, is to have good rocks, and good wood. In order for your rocks to absorb a sufficient amount of heat, they need to be volcanic. When gathering wood, it is important to take into consideration what types of wood will burn over a long period of time and gather lots of heat. A common misconception is that you need a deep hole or pit for your hāngi. Before you begin, you should have good nonflammable sacks, mutton cloths and a sheet (that no one has slept on) soaking in a tub, or barrel of water. 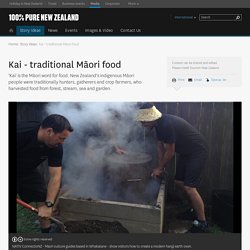 Traditional Māori believed that the earth was the giver of all life. From the soil, came food and that same food was cooked beneath the earth. It was accepted that the people who were born on that land inherited the right to produce from it and to protect it for the benefit of all. Māori foods – kai Māori. A quick, easy summary Read the Full Story Growing and gathering The ancestors of the Māori brought edible plants from their homeland, including kūmara, yam and taro. 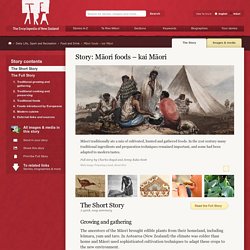 In Aotearoa (New Zealand) the climate was colder than home and Māori used sophisticated cultivation techniques to adapt these crops to the new environment. Aotearoa was originally covered with dense native bush, and its wild ferns, vines, palms, fungi, berries, fruit and seeds became important foods. Māori introduced kiore (the Polynesian rat) and kurī (the Polynesian dog), both valuable sources of meat. Maori foods and recipes. Walking through any city in New Zealand you will find a wide range of cuisines, from Italian to Turkish to Thai and many more Despite this range, you are unlikely to find Maori food outside of a Marae kitchen or Whanau (family) home. 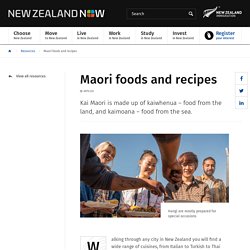 Traditionally Maori did not prepare or cook food in the same buildings that they slept in. Instead food was cooked outside or in special cooking sheds. The recipes you will find today involve the use of modern indoor kitchen facilities such as ovens and refrigerators. Some foods such as hangi are still cooked outside, but these are usually reserved for special occasions. Festivals such as Kawhia Kai offer the opportunity to taste a large range of traditional Kai Maori while taking part in cultural activities. The hangi The hangi is a traditional form of cooking that has its origins in the umu (earth ovens) of ancient Polynesia. Foodhistory. Kia ora, you are the visitor to this page History When Maori first arrived in New Zealand they hardly had any food known to them to survive except for the common food of New Zealand. 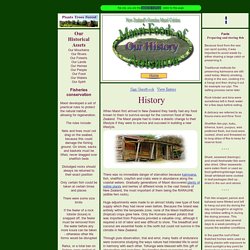 The Maori people had to make a drastic change to their lifestyle if they were to survive and succeed in building a new lifestyle. There was no immediate danger of starvation because kaimoana, fish, shellfish, crayfish and crabs were in abundance along the coastal waters. Gradually generations of Maori discovered plenty of edible plants and berries of different kinds in the vast forests of New Zealand, the most important of them being the RARAUHE (edible fern roots). Huge adjustments were made to an almost totally new type of food supply which they had never seen before. Through pure observation, trial and error, many feats of endurance were overcome studying the ways nature had intended life to exist in harmony with each other. Our Historical Assets Our Mountains Our Rivers Our Forests Our Lands Our Homes. Māori, Pacific & other cultures. Food is an important part of most, if not all, cultures. 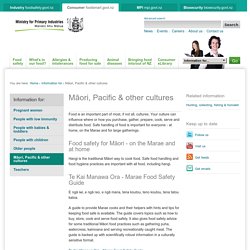 Your culture can influence where or how you purchase, gather, prepare, cook, serve and distribute food. Safe handling of food is important for everyone - at home, on the Marae and for large gatherings. Food safety for Māori - on the Marae and at home Hangi is the traditional Māori way to cook food.