The History of Fish and Chips - National Dish of Britain. Ahh.... 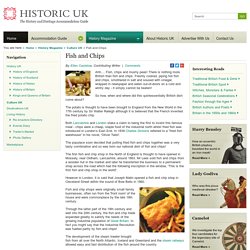 Fish, chips and mushy peas! There is nothing more British than fish and chips. Freshly cooked, piping hot fish and chips, smothered in salt and soused with vinegar, wrapped in newspaper and eaten out-of-doors on a cold and wintry day - it simply cannot be beaten! So how, when and where did this quintessentially British dish come about? The potato is thought to have been brought to England from the New World in the 17th century by Sir Walter Raleigh although it is believed that the French invented the fried potato chip. Both Lancashire and London stake a claim to being the first to invent this famous meal - chips were a cheap, staple food of the industrial north whilst fried fish was introduced in London’s East End.

The populace soon decided that putting fried fish and chips together was a very tasty combination and so was born our national dish of fish and chips! So are fish and chips any good for us, nutritionally? KFC - History. Harland Sanders is born just outside Henryville, Indiana. 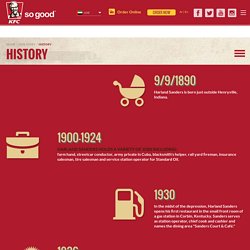 --Definition of Fast Food-- Fast food is food that can be prepared and served very quickly. 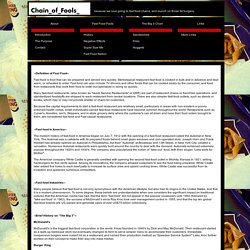 Stereotypical restaurant fast food is cooked in bulk and in advance and kept warm, or reheated to order. Fast food can also include TV dinners and other foods that can be cooked easily by the consumer, and food from restaurants that cook their food to order but specialize in doing so quickly. Many fast-food restaurants, (also known as "Quick Service Restaurants" or QSR) are part of restaurant chains or franchise operations, and standardized foodstuffs are shipped to each restaurant from central locations.

There are also simpler fast-food outlets, such as stands or kiosks, which may or may not provide shelter or chairs for customers. Because the capital requirements to start a fast-food restaurant are relatively small, particularly in areas with non-existent or poorly enforced health codes, small individually-owned fast-food restaurants have become common throughout the world. McDonald's Burger King. 18 Things You Didn't Know About The History Of Fast Food. The History of Fast Food in America. Contrary to popular opinion, the history of fast food did not start at the same point in time and space as the history of McDonald’s. 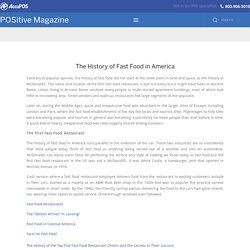 The name and location of the first fast food restaurant is lost to history but it might have been in Ancient Rome. Urban living in Ancient Rome involved many people in multi-storied apartment buildings, most of which had little or no cooking area. Street vendors and walk-up restaurants fed large segments of the populace. Later on, during the Middle Ages, quick and inexpensive food was abundant in the larger cities of Europe, including London and Paris, where the fast food establishments of the day fed locals and tourists alike. Pilgrimages to holy sites were becoming popular and tourism in general was becoming a possibility for more people than ever before in time.

The History of Fast Food" Restaurants have been around in some form for most of human civilization. 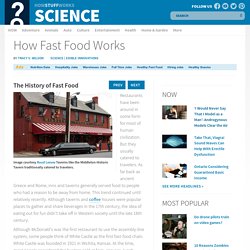 But they usually catered to travelers. As far back as ancient Greece and Rome, inns and taverns generally served food to people who had a reason to be away from home. This trend continued until relatively recently. Although taverns and coffee houses were popular places to gather and share beverages in the 17th century, the idea of eating out for fun didn't take off in Western society until the late 18th century. Although McDonald's was the first restaurant to use the assembly-line system, some people think of White Castle as the first fast-food chain. White Castle's founders decided to change the public's perception of hamburgers. The McDonald brothers opened their redesigned restaurant in 1948, and several fast-food chains that exist today opened soon after.

According to the National Restaurant Association, American sales of fast food totaled $163.5 billion in 2005 [ref].