Geothermal. – Geothermal energy. The word ‘geothermal’ comes from the Greek and means ‘heat from the earth’. 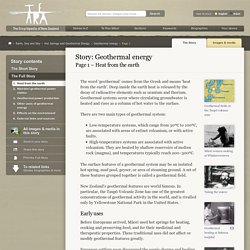 Deep inside the earth heat is released by the decay of radioactive elements such as uranium and thorium. Geothermal systems occur where circulating groundwater is heated and rises as a column of hot water to the surface. There are two main types of geothermal system: Low-temperature systems, which range from 30ºC to 100ºC, are associated with areas of extinct volcanism, or with active faults. High-temperature systems are associated with active volcanism. Geothermal energy.

A quick, easy summary Read the Full Story What is geothermal energy? 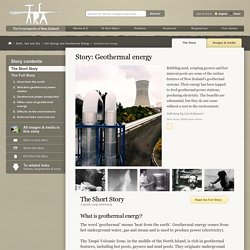 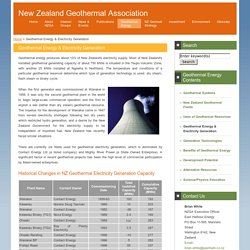 Most of New Zealand's installed geothermal generating capacity of about 750 MWe is situated in the Taupo Volcanic Zone, with another 25 MWe installed at Ngawha in Northland. The temperature and conditions of a particular geothermal reservoir determine which type of generation technology is used: dry steam, flash steam or binary cycle. When the first generator was commissioned at Wairakei in 1958, it was only the second geothermal plant in the world to begin large-scale commercial operation and the first to exploit a wet (rather than dry steam) geothermal resource. The impetus for the development of Wairakei came in 1947 from severe electricity shortages following two dry years which restricted hydro generation, and a desire by the New Zealand Government for the electricity supply to be independent of imported fuel. 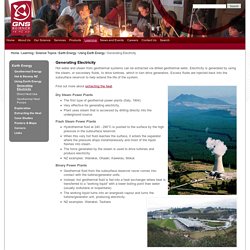 Electricity is generated by using the steam, or secondary fluids, to drive turbines, which in turn drive generators. Excess fluids are injected back into the subsurface reservoir to help extend the life of the system. Find out more about extracting the heat. Dry Steam Power Plants. Geothermal power production – Geothermal energy. Turning steam into power New Zealand’s geothermal power stations produce electricity using the following process: Geothermal fluid – a naturally occurring mineralised mixture of pressurised water and steam heated to between 200º and 300ºC – is drawn from a geothermal field by production wells at depths of 1–3 kilometres. 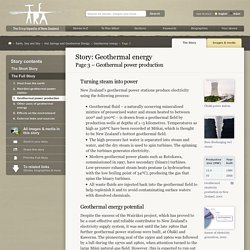 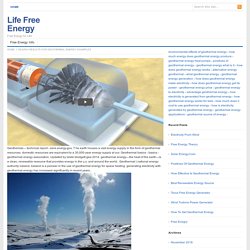 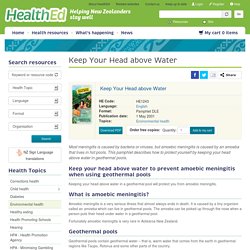