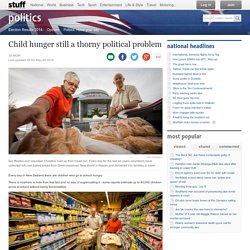 Every day for the last six years volunteers have collected left-over baked bread from Greenmeadows New World in Napier and delivered it to families in need. Every day in New Zealand there are children who go to school hungry. There is nowhere to hide from that fact and no way of sugarcoating it - some reports estimate up to 40,000 children arrive at school without being fed breakfast. Iain Beaton, owner of Greenmeadows New World, and Napier Family Centre volunteer Christine collect unsold bread to give to families in need. For decades the country's televisions have been flooded with advertisements calling for Kiwis to donate money to starving African children. Over the years those pleas have increased, the countries affected by hunger and disease have got closer to home and it's become increasingly more difficult to say no when donating is as simple as sending a text.

Parents? - Stuff. Food security key to well being. Last updated 14:01 04/04/2011 New Zealanders who do not have enough access to nutritious and affordable food have higher levels of distress than people who are well-fed, a new study has found. 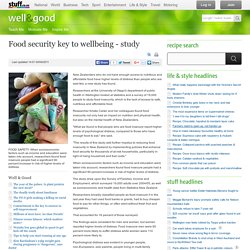 Researchers at the University of Otago's department of public health in Wellington looked at statistics and a survey of 19,000 people to study food insecurity, which is the lack of access to safe, nutritious and affordable food. Researcher Kristie Carter and her colleagues found food insecurity not only had an impact on nutrition and physical health, but also on the mental health of New Zealanders. "What we found is that people who are food insecure report higher levels of psychological distress, compared to those who have enough food to eat," she said. "The results of this study add further impetus to reducing food insecurity in New Zealand by implementing policies that enhance food security for thousands of at-risk households, particularly in light of rising household and fuel costs.

" What are the determinants of food insecurity in New Zealand and does this differ for males and females? Speaking for Ourselves: The truth about what keeps people in poverty from those who live it. Food security. Food Security: Current research initiatives. Parents caught by rising cost of healthy food. Last updated 12:00, April 18 2015 Palmerston North parents are struggling to fill lunch boxes with healthy snacks as prices continue to rise. 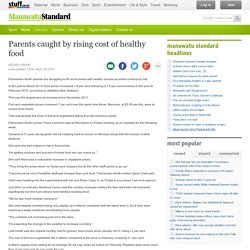 In the year to March 2015, food prices increased 1.9 per cent, following a 1.5 per cent increase in the year to February 2015, according to Statistics New Zealand. This was the largest annual increase since December 2011. Fruit and vegetable prices increased 7 per cent over the same time frame. Bananas, at $3.05 per kilo, were at record price levels. That was despite the price of fruit and vegetables falling from the previous month. Palmerston North woman Fiona Cameron was at Pak'nSave on Friday stocking up on supplies for the following week. Cameron's 11-year-old daughter will be heading back to school on Monday along with the hoards of other students. She said she had noticed a rise in food prices. "I'm getting chippies and just sort of snack food she can snack on. 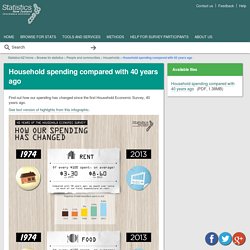 See text version of highlights from this infographic. Text version of highlights from this infographic On average, Kiwi households spend over twice as much of their total expenditure on rent now, compared with 40 years ago, according to the latest Household Economic Survey (HES). In 1974, on average, 3.3 percent of a household’s total expenditure was spent on rent, compared with 8.6 percent in 2013. Back then, on average we spent over three times as much of our total expenditure on clothing and footwear as we do today, according to HES.

And 40 years ago, our households spent, on average, almost a third more of their total expenditure on fruit and vegetables, and over twice as much on meat, fish, and poultry compared with today. Non incomes measures report 2015.