The real Jesus of Nazareth - what do we know about his life - his biography. This remarkable set of messages chronicle many of the early years of the life of Jesus - fascinating insights to a most remarkable life. 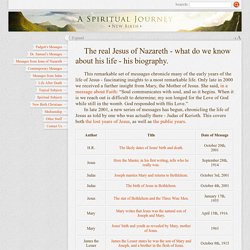 Only late in 2000 we received a further insight from Mary, the Mother of Jesus. She said, in a message about Faith: “Soul communicates with soul, and so it begins. When it is we reach out is difficult to determine; my son longed for the Love of God while still in the womb. God responded with His Love.” In late 2001, a new series of messages has begun, chronicling the life of Jesus as told by one who was actually there - Judas of Kerioth. The Spirit Heavens and the Christian Kingdom of God. Orthodox Christians who arrive on this web page may be thinking that the word “heaven” is the word often used in the Bible as the Kingdom of God. 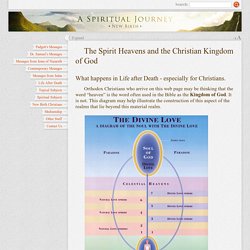 It is not. This diagram may help illustrate the construction of this aspect of the realms that lie beyond this material realm. Here, on this site, we use the word “Celestial Heavens” to refer to that which Jesus called “The Kingdom of God”. And here the confusion starts, because we find that there are a whole bunch of “heavens” below, and inferior to “The Kingdom of God.” These lesser heavens we have called on this site Spirit Spheres or Spirit Heavens (but which is not labeled on the diagram other than as a sphere), and they are shown in the diagram numbered from 1 to 7.

This distinction is the root cause of so much confusion by orthodox Christians, and their insistence on all other folks going to hell. The spirit heavens are just as physical as our world. What Happens To Most Folks Souls After Death? In order to answer this question, we need to define “most” folks. 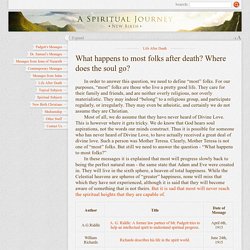 For our purposes, “most” folks are those who live a pretty good life. They care for their family and friends, and are neither overly religious, nor overly materialistic. They may indeed “belong” to a religious group, and participate regularly, or irregularly. They may even be atheistic, and certainly we do not assume they are Christian. Most of all, we do assume that they have never heard of Divine Love. In these messages it is explained that most will progress slowly back to being the perfect natural man - the same state that Adam and Eve were created in. We are told that the opportunity to progress beyond the perfect natural man will be withdrawn, at some point, but only after every soul has refused this opportunity. All the Messages from Judas of Kerioth.

While Judas is not the only Celestial Angel channelled by H., he is certainly the most prolific. 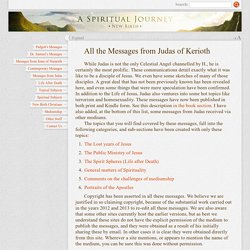 These communications detail exactly what it was like to be a disciple of Jesus. We even have some sketches of many of those disciples. A great deal that has not been previously known has been revealed here, and even some things that were mere speculation have been confirmed. In addition to the Life of Jesus, Judas also ventures into some hot topics like terrorism and homosexuality. These messages have now been published in both print and Kindle form. The topics that you will find covered by these messages, fall into the following categories, and sub-sections have been created with only these topics: Read the Book of Judas of Kerioth. In 2001 rather unexpectedly, a good friend of mine began receiving communications from spirit. 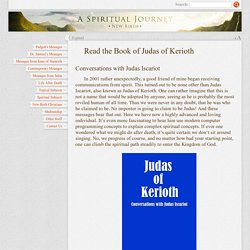 This turned out to be none other than Judas Iscariot, also known as Judas of Kerioth. One can rather imagine that this is not a name that would be adopted by anyone, seeing as he is probably the most reviled human of all time. Thus we were never in any doubt, that he was who he claimed to be. No imposter is going to claim to be Judas! And these messages bear that out. This book is a publication of what ensued over the following years. A sketch of what Judas looked like. This series was not completed, and the messages end in the year 26 A.D., although some insights were given into events that happened later.