Hermann von Helmholtz. Johannes von Kries. Johannes Adolf von Kries (6 October 1853 – 30 December 1928) was a German physiological psychologist[1] who formulated the modern “duplicity” or “duplexity” theory of vision mediated by rod cells at low light levels and three types of cone cells at higher light levels.[2][3] He made important contributions in the field of haemodynamics.[4] In addition, von Kries was a significant theorist of the foundations of probability. 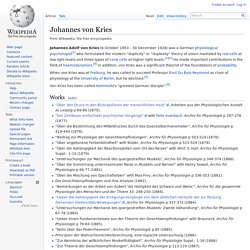 When von Kries was at Freiburg, he was called to succeed Professor Emil Du Bois-Reymond as chair of physiology at the University of Berlin, but he declined.[5] Von Kries has been called Helmholtz's “greatest German disciple”.[6] Works[edit] “Über den Druck in den Blutcapillaren der menschlichen Haut”, Arbeiten aus der Physiologischen Anstalt zu Leipzig p 69-80 (1875). Michel Eugène Chevreul. Michel Eugène Chevreul (31 August 1786 – 9 April 1889)[1] was a French chemist whose work with fatty acids led to early applications in the fields of art and science. 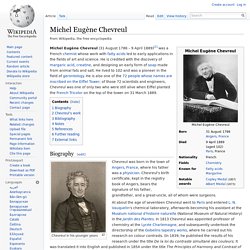 He is credited with the discovery of margaric acid, creatine, and designing an early form of soap made from animal fats and salt. He lived to 102 and was a pioneer in the field of gerontology. He is also one of the 72 people whose names are inscribed on the Eiffel Tower; of those 72 scientists and engineers, Chevreul was one of only two who were still alive when Eiffel planted the French Tricolor on the top of the tower on 31 March 1889. Biography[edit] Josef Albers. Josef Albers (/ˈælbərz, ˈɑːl-/; German: [ˈalbɐs]; March 19, 1888 – March 25, 1976)[1] was a German-born American artist and educator whose work, both in Europe and in the United States, formed the basis of some of the most influential and far-reaching art education programs of the twentieth century. 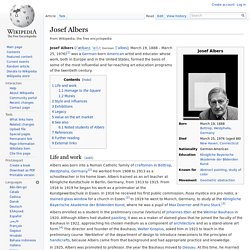 Life and work[edit] Albers enrolled as a student in the preliminary course (Vorkurs) of Johannes Itten at the Weimar Bauhaus in 1920. Ogden Rood. Ogden Nicholas Rood (3 February 1831 in Danbury, Connecticut – 12 November 1902 in Manhattan) was an American physicist[1] best known for his work in color theory. 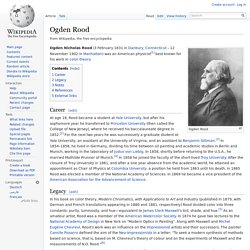 Career[edit] Legacy[edit] In his book on color theory, Modern Chromatics, with Applications to Art and Industry (published in 1879, with German and French translations appearing in 1880 and 1881, respectively) Rood divided color into three constants: purity, luminosity, and hue—equivalent to James Clerk Maxwell's tint, shade, and hue.[5] As an amateur artist, Rood was a member of the American Watercolor Society. In 1874 he gave two lectures to the National Academy of Design in New York on "Modern Optics in Painting". Along with Maxwell and Michel Eugène Chevreul, Rood's work was an influence on the Impressionist artists and their successors. Rood's theory of contrasting colors was particularly influential on Georges-Pierre Seurat, the founder of Neo-Impressionism and the foremost Pointillist. 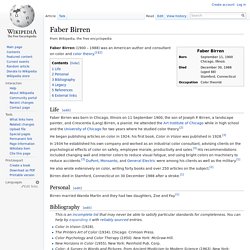 Birren, a landscape painter, and Crescentia (Lang) Birren, a pianist. He attended the Art Institute of Chicago while in high school and the University of Chicago for two years where he studied color theory.[2] Louis Bertrand Castel. Louis Bertrand Castel (15 November 1688 – 9 January 1757) was a French mathematician born in Montpellier, and entered the order of the Jesuits in 1703. 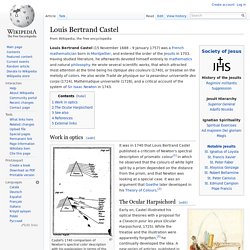 Having studied literature, he afterwards devoted himself entirely to mathematics and natural philosophy. He wrote several scientific works, that which attracted most attention at the time being his Optique des couleurs (1740), or treatise on the melody of colors. He also wrote Traité de physique sur la pesanteur universelle des corps (1724), Mathématique universelle (1728), and a critical account of the system of Sir Isaac Newton in 1743. Work in optics[edit] Castel's 1740 comparison of Newton's spectral color description with his explanation in terms of the interaction of light and dark, which Goethe later developed into his Theory of Colours. 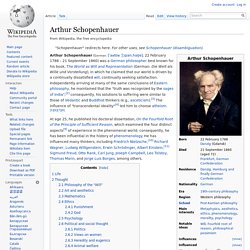 Św. Ducha (formerly Heiligegeistgasse) In 1814, Schopenhauer began his seminal work The World as Will and Representation (Die Welt als Wille und Vorstellung). He finished it in 1818 and published it the following year. While in Berlin, Schopenhauer was named as a defendant in a lawsuit initiated by a woman named Caroline Marquet.[18] She asked for damages, alleging that Schopenhauer had pushed her. In 1821, he fell in love with nineteen-year old opera singer, Caroline Richter (called Medon), and had a relationship with her for several years. Schopenhauer had a notably strained relationship with his mother Johanna Schopenhauer. Grave at Frankfurt Hauptfriedhof. Philipp Otto Runge. Philipp Otto Runge (German: [ˈʀʊŋə]; 23 July 1777 – 2 December 1810) was a Romantic German painter and draughtsman. 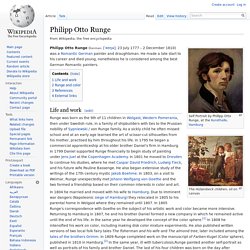 He made a late start to his career and died young, nonetheless he is considered among the best German Romantic painters. Life and work[edit] The Hülsenbeck children, oil on canvas. Johannes Itten. Johannes Itten (11 November 1888 – 25 March 1967) was a Swiss expressionist painter, designer, teacher, writer and theorist associated with the Bauhaus (Staatliche Bauhaus) school. 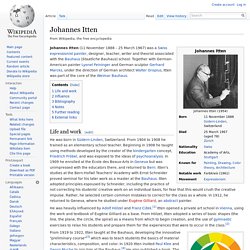 Together with German-American painter Lyonel Feininger and German sculptor Gerhard Marcks, under the direction of German architect Walter Gropius, Itten was part of the core of the Weimar Bauhaus. Life and work[edit] He was born in Südern-Linden, Switzerland. From 1904 to 1908 he trained as an elementary school teacher. Beginning in 1908 he taught using methods developed by the creator of the kindergarten concept, Friedrich Fröbel, and was exposed to the ideas of psychoanalysis. He was heavily influenced by Adolf Hölzel and Franz Cižek.[1] Itten opened a private art school in Vienna, using the work and textbook of Eugène Gilliard as a base. Wilhelm Ostwald. Friedrich Wilhelm Ostwald (Latvian: Vilhelms Ostvalds; 2 September 1853 – 4 April 1932) was a Baltic German chemist. 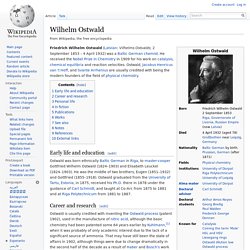 He received the Nobel Prize in Chemistry in 1909 for his work on catalysis, chemical equilibria and reaction velocities. Ostwald, Jacobus Henricus van 't Hoff, and Svante Arrhenius are usually credited with being the modern founders of the field of physical chemistry. Albert Henry Munsell. Albert Henry Munsell (January 6, 1858 – June 28, 1918) was an American painter, teacher of art, and the inventor of the Munsell color system. He was born in Boston, Massachusetts,[1] attended and served on the faculty of Massachusetts Normal Art School, and died in nearby Brookline. As a painter, he was noted for seascapes and portraits. Munsell is famous for inventing the Munsell color system,[1] an early attempt at creating an accurate system for numerically describing colors. He wrote three books about it: A Color Notation (1905), Atlas of the Munsell Color System (1915) and one published posthumously, A Grammar of Color: Arrangements of Strathmore Papers in a Variety of Printed Color Combinations According to The Munsell Color System (1921).

The Munsell color order system has gained international acceptance and has served as the foundation for many color order systems, including CIELAB. Leon Battista Alberti. Leon Battista Alberti[1] (February 14, 1404 – April 25, 1472) was an Italian humanist author, artist, architect, poet, priest, linguist, philosopher and cryptographer; he epitomised the Renaissance Man. Although he is often characterized as an "architect" exclusively, as James Beck has observed,[2] "to single out one of Leon Battista's 'fields' over others as somehow functionally independent and self-sufficient is of no help at all to any effort to characterize Alberti's extensive explorations in the fine arts.