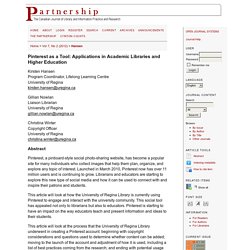 Launched in March 2010, Pinterest now has over 11 million users and is continuing to grow. This article will look at how the University of Regina Library is currently using Pinterest to engage and interact with the university community. Keywords. The School of Library and Information Science - Wayne State University Blogs. My last blog listed 10 ways public libraries use Pinterest to interest patrons in their missions. 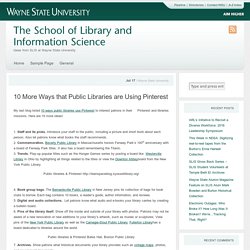 Here are 10 more ideas! 1. Staff and its picks. Introduce your staff to the public, including a picture and short blurb about each person. AB - Pinterest for Libraries - Slideshare. AB - Wiki - Pinterest as a Promotional Tool for Public Libraries. Introduction See also LIBR559M class projects 2013 This is a group presentation for LIBR 559M: Social Media for Information Professionals, an online course offered by the School of Library, Archival, and Information Studies (SLAIS) at the University of British Columbia in Vancouver, British Columbia, Canada. 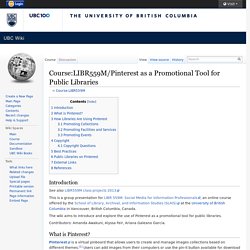 The wiki aims to introduce and explore the use of Pinterest as a promotional tool for public libraries. Contributors: Amanda Awakuni, Alyssa Feir, Ariana Galeano Garcia. Blog - The Library Marketing Toolkit: Pinterest 101: A Primer for Libraries. Pinterest.com is a site you'll have heard of - it's THE social media platform of the moment. 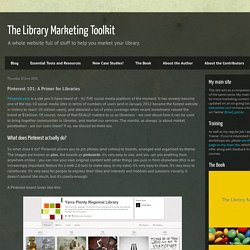 It has already become one of the top-10 social media sites in terms of numbers of users (and in January 2012 became the fastest website in history to reach 10 million users), and attracted a lot of press coverage when recent investment valued the brand at $1billion. Of course, none of that REALLY matters to us as librarians - we care about how it can be used to bring together communities in libraries, and market our services. Blog - How are Colleges and Universities Using Pinterest? For colleges and universities, which serve a highly plugged-in generation, it can be overwhelming to keep track of new social technology. 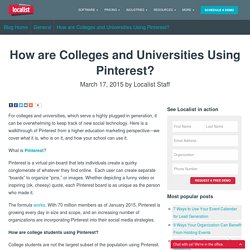 Here is a walkthrough of Pinterest from a higher education marketing perspective—we cover what it is, who is on it, and how your school can use it. What is Pinterest? Pinterest is a virtual pin-board that lets individuals create a quirky conglomerate of whatever they find online. Each user can create separate “boards” to organize “pins,” or images. Whether depicting a funny video or inspiring (ok, cheesy) quote, each Pinterest board is as unique as the person who made it. The formula works. Blog - Pinterest is the New Black.

It's funny how rapidly new web tools are developed and adopted - I've only been hearing about Pinterest for the last couple months, but already it seems to have spread far and wide in libraries. 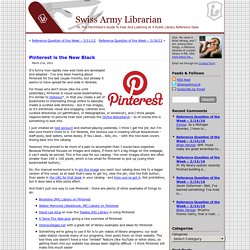 For those who don't know (like me until yesterday), Pinterest is visual social bookmarking. It's similar to Delicious*, in that you create a set of bookmarks to interesting things online to basically create a curated web directory - but it has images, so it's extremely visual and engaging. Libraries love curated directories (or pathfinders, or bibliographies, or whatever), and I think people respond better to pictures than text (witness the Online Newsstand) - so of course this is something to look into. I just created an test account and started playing yesterday. I think I get the jist, but I'm also sure there's more to it. However, this proved to be more of a pain to accomplish than I would have expected. Course Guides: Visualizing Value: Using Pinterest to Market the Academic Library. Pinterest User StatisticsCrook, J. (2012). 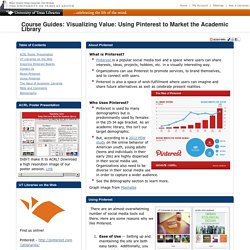 This is Everything You Need to Know About Pinterest (Infographic). TechCrunch. Link.Erickson, C. (2012). 13 'Pinteresting' Facts About Pinterest Users (Infographic). Mashable. Link.Ferenstein, G. (2013). Blog - Pinterest: A New Social Media Opportunity for Libraries. Pinterest is one of the newest social media websites that is rapidly gaining popularity. 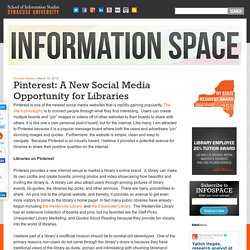 The site’s philosophy is to connect people through what they find interesting. Users can create multiple boards and “pin” images or videos off of other websites to their boards to share with others. Using Pinterest @ The Library. By Katie Boyer on December 27, 2012 Pinterest is a social media website that allows users to create and share virtual bulletin boards. 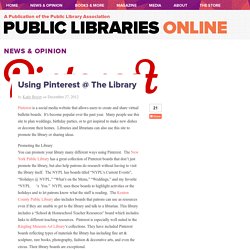 It’s become popular over the past year. AB - How Libraries are Doing Pinterest Wrong. Ok, I admit it I am one of the 71% of women on Pinterest. 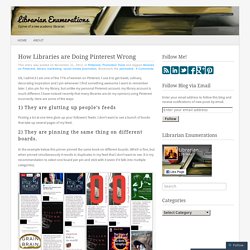 I use it to get travel, culinary, decorating inspiration and I pin whenever I find something awesome I want to remember later. I also pin for my library, but unlike my personal Pinterest account, my library account is much different. I have noticed recently that many libraries are (in my opinion) using Pinterest incorrectly. Here are some of the ways: 1) They are glutting up people’s feeds Posting a lot at one time gluts up your followers’ feeds. 2) They are pinning the same thing on different boards. In the example below this pinner pinned the same book on different boards.

Not only is the site super addicting, but it’s an excellent resource for librarians. While it’s a way to connect with your favorite authors, publishers, libraries, and people you know, it’s also way to find great craft ideas, recipes, display ideas, and a way to connect your library to your community. Social media sites are all about connections.

Programming As the teen librarian, I concentrate on four types of programs for teens: movies, bookish, food, and crafts. 20 Great Ways Libraries Are Using Pinterest. Pinterest is taking the social media world by storm, and it isn’t just popular with individual users. Businesses, nonprofits, and even libraries are sharing ideas and information through the site as well, connecting with people from around the country and around the globe. Whether you’re a librarian, student, teacher, or just an avowed bibliophile, Pinterest offers another great way to keep up with creative and cutting-edge ways libraries are engaging with their communities. Read on to learn about some of the many ways libraries are helping spread the word about the resources and services they offer, using this innovative new social media forum.