Digital Humanities, Digital Literacies & Digital Criticism. Digital Textualities. Crypto-Forensics - Steven-Hall.org. Don’t Be A Hero - 80 Days the Game - The Literary Platform. Transforming Around the World in Eighty Days into an interactive story Meg Jayanth is the writer of 80 Days – a steampunk interactive narrative adventure game based on Jules Verne’s ‘Around the World in Eighty Days’. 80 Days is published by inkle studios in partnership with Profile Books, released for iPhone and iPad this month. 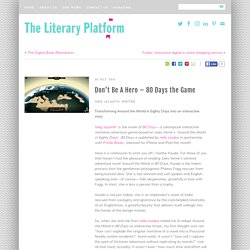 Here is a confession to start you off: I loathe Aouda. For those of you that haven’t had the pleasure of reading Jules Verne’s seminal adventure novel Around the World in 80 Days, Aouda is the Indian princess that the gentleman protagonist Phileas Fogg rescues from being burned alive. The%20Anxieties%20of%20Authenticity%20in%20Post%202000%20British%20Fiction. 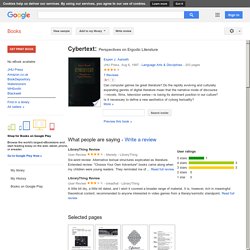 Do the rapidly evolving and culturally expanding genres of digital literature mean that the narrative mode of discourse—novels, films, television series—is losing its dominant position in our culture? Is it necessary to define a new aesthetics of cyborg textuality? In Cybertext, Espen Aarseth explores the aesthetics and textual dynamics of digital literature and its diverse genres, including hypertext fiction, computer games, computer-generated poetry and prose, and collaborative Internet texts such as MUDs. Instead of insisting on the uniqueness and newness of electronic writing and interactive fiction, however, Aarseth situates these literary forms within the tradition of "ergodic" literature—a term borrowed from physics to describe open, dynamic texts such as the I Ching or Apollinaire's calligrams, with which the reader must perform specific actions to generate a literary sequence.

Amazon.co. Amazon.co. Review 'Potentially daunting, this complex subject is made a snap by clever arrangements for entries: five different types, from mini-essay to thumbnail definition, all cross-indexed. 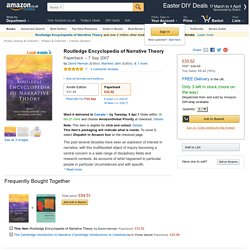 The helpful navigational aids include coded typeface, a thematically-organized reader's guide, and an excellent comprehensive index. Thorough, accessible, and remarkably free of obfuscating language. Highly recommended. 'It is the single volume I would advise my students and other budding narratologists to purchase so as to have it constantly at hand for quick consultation...With its more than 700 tightly packed pages, close to 450 entries by 200 international experts on narrative-theoretical topics, plus an 80-page index, the Encyclopedia is well worth the investment.' - Pekka Tammi, Language and Literature 16:4 (2007) About the Author. 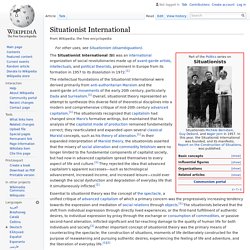 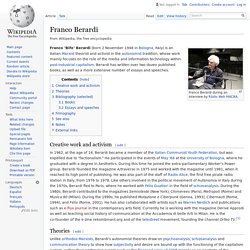 Berardi has written over two dozen published books, as well as a more extensive number of essays and speeches. Creative work and activism[edit] In 1962, at the age of 14, Berardi became a member of the Italian Communist Youth Federation, but was expelled due to "factionalism. " Who Sleeps? Jonathan Crary's "24/7" Although Crary concludes with sleep as a site of potential collective resistance (one that, it should be said, may have already become impossible) his initial interest in sleep as a basic requirement of human life is suggestive of other potential political and social connections. 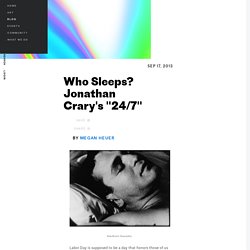 By focusing his concerns in 24/7 not only on new modes of production (i.e. new technologies and the kinds of labor they solicit from users), but also on reproduction (i.e. sleep as a necessary rest and resetting of the body), Crary approaches a particular strain of Marxist feminist thinking that emerged in the 1970s and has recently become celebrated in the theoretical discussions surrounding Occupy Wall Street and activist challenges to contemporary capitalism. The economics of social reproduction have been a central concern of thinkers like the Italian Silvia Federici and the American Nancy Fraser, among others. Infinate distraction. Ode : Intimations of immortality from recollections of early ... - Full View. Neil Harbisson: Life With Extra Senses.