Cannabis legalisation and control referendum. New Zealand’s cannabis referendum explained. Full article: Patterns of recreational cannabis use in Aotearoa-New Zealand and their consequences: evidence to inform voters in the 2020 referendum. Office of the Prime Minister's Chief Science Advisor. Helen Clark Cannabis Conversation. Teen dope users less likely to qualify. Teenagers who use cannabis daily are 60 percent less likely to complete high school or get a degree than non-users, a study has found. 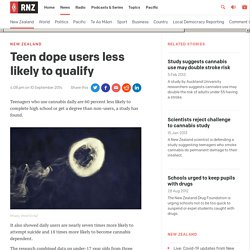 Photo: PHOTO NZ It also showed daily users are nearly seven times more likely to attempt suicide and 18 times more likely to become cannabis dependent. The research combined data on under-17 year olds from three long-running Australasian studies, including one at Otago University which followed 1200 New Zealanders from birth to their 30s. David Fergusson, from the university's Christchurch Health and Development Study, said the research reinforced the message that early use of cannabis was harmful. "If I were doing the laws, I would make supply to a young person a different crime, with a heavier penalty, than supply to an older person," he said. "What is interesting about the study is the way that this finding is consistent across three different studies done in different centres using different methods of investigation.

" Reforming cannabis laws is a complex challenge, but New Zealand's history of drug reform holds important lessons. In less than three months, New Zealanders will vote in the world’s first national referendum on a comprehensive proposal to legalise the recreational use of cannabis. 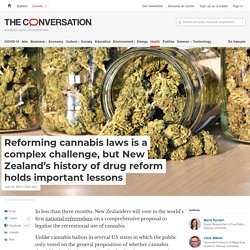 Unlike cannabis ballots in several US states in which the public only voted on the general proposition of whether cannabis should be legalised or not, New Zealanders have access to the detailed Cannabis Legalisation and Control Bill. It outlines how the government proposes to establish a “controlled and tightly regulated” legal cannabis market. The approach is not like the Brexit referendum, which had no detailed plan of action for a yes vote. Neither is it like New Zealand’s much maligned 2016 flag referendum, in which people knew exactly what they were voting for.

In this case, New Zealanders are voting on a proposed law reform, but even following a yes vote, the cannabis regime will have to go through select committees and public consultation. Even the best law does not guarantee compliance Preparing for challenges. What 40 years following thousands of NZ people tells us about cannabis harm. Longitudinal studies have a huge amount to teach us about the impacts of using cannabis, writes Joseph M Boden, director of the Christchurch Health and Development Study. 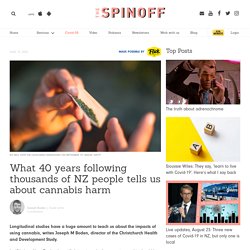 In 101 days, New Zealanders will determine whether or not cannabis should be legalised. In making that decision, there is plenty to learn from the Christchurch and Dunedin longitudinal studies, which together have contributed a vast amount of knowledge regarding cannabis-related harm. The Christchurch Health and Development Study and the Dunedin Multidisciplinary Health and Development Study were both founded in the 1970s.

Each includes more than 1000 participants, with individuals followed into their 40s. Alison Mau: Ahead of the 2020 cannabis referendum, beware the disinformation campaign. OPINION: Carole Cadwalladr is my new hero. 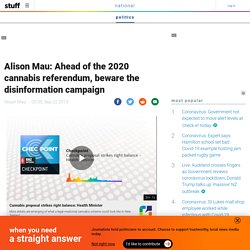 If you're at all interested in the effect of fake news on pretty much everything I cannot recommend too highly her TED talk. Cadwalladr is not a polished public speaker, she's a journalist, but her talk, 'Facebook's role in Brexit - and the threat to democracy' is mesmerising. In 13 minutes she relays how she rumbled a trail of disinformation dressed as truth, that led straight to Cambridge Analytica's harvesting of more than 80 million Facebook users' data. You can feel the unease creeping up your spine as you watch.

"Vote Leave unleashed a fire hose of disinformation," she says.

No. Cannabis referendum: Who is behind the campaigns fighting for your vote? With the cannabis referendum approaching, Kiwis are starting to see ads pop up on billboards, TV, and newspapers, trying to sway their vote. 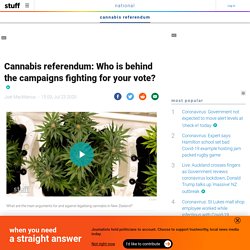 Voters will be asked a yes or no question of whether they support the proposed Cannabis Legalisation and Control Bill. The advertising campaigns around the referendum are likely to be dwarfed by the general election in terms of money, reach, and attention. The only major political party actively campaigning for any position is the Green Party, which has endorsed a Yes vote. Both Labour and National are officially staying out of the debate. READ MORE: * 'To legalise is to normalise': Auckland Catholic school's 'say no' sign raises eyebrows * Cannabis policing 'worst waste of taxpayer money', former PM Helen Clark says * The Detail: How minor parties get elected into parliament Instead, a host of activist groups are leading the debate. This is who they are and what they stand for: NZ Drug Foundation (Support) Send us your stories, photos and videos. 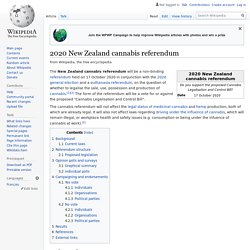 It will also not affect laws regarding driving under the influence of cannabis, which will remain illegal, or workplace health and safety issues (e.g. consumption or being under the infuence of cannabis at work).[2] Background[edit] After the 2017 general election, the confidence and supply agreement between the Labour Party and the Green Party included an obligation for the government to "have a referendum on legalising the personal use of cannabis at, or by, the 2020 general election".[3][4][5] This agreement followed statements made by the Green Party in December 2016, that if it formed a government in the 2017 election it would legalise the personal production and possession of cannabis for personal use.[6][7][8] Current laws[edit] Cannabis referendum: Four experts weigh up the pros and cons of legalising marijuana. As the debate about New Zealand's Cannabis Legalisation and Control Referendum heats up, we will vote 'no, not yet' at the ballot in September, as we believe doctors need more time to better understand this new and complex field of medicine. 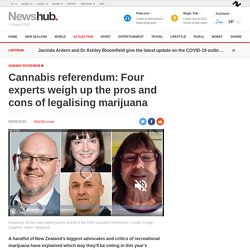 At Eqalis we are not against the recreational use of cannabis, our 'no, not yet' position is based on health and wellness concerns for all New Zealanders. We believe that doctors need more time to research and study cannabis in order to have the confidence to prescribe it as part of a treatment programme. How can we expect doctors to have a detailed understanding of treatments and dosages when they have not had the opportunity - or time - to study medicinal cannabis in depth? To get the full benefit of medicinal cannabis, patients need access to high-quality formulas, designed to specifically treat their medical condition. Cannabis Legalisation and Control Bill Exposure Draft for Referendum. 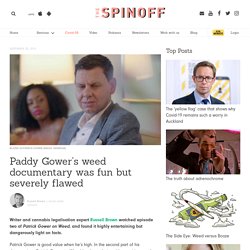 Patrick Gower is good value when he’s high. In the second part of his documentary Patrick Gower on Weed, he does what you’d expect in a modern weed documentary and immerses himself – first with a doctor, then a member of the Auckland elite who’s producing cannabis tea in California, and a “ganja yoga” group. He’s funny. It’s interesting, and a good watch. And yet, I was pretty angry by the time I finished watching it. “I know New Zealand and I understand how the government works there. Except, we already have a plan and it’s fairly detailed. “A legal industry [in New Zealand] will likely bring big brands, new products, advertising and licensing,” Gower warns the viewer.