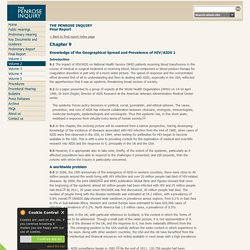 The speed of response and the concentrated effort devoted first of all to understanding and then to dealing with AIDS, especially in the USA, reflected the apprehension that it was an epidemic threatening broad sectors of society. 9.2 In a paper presented to a group of experts at the World Health Organization (WHO) on 14-16 April 1986, Dr John Ziegler, Director of AIDS Research at the American Veterans Administration Medical Center wrote: The epidemic forces policy decisions in political, social, journalistic, and ethical spheres. A worldwide problem. AIDS - factsheet. Living with HIV/AIDS There is no cure for HIV/AIDS. 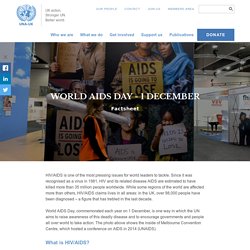 However, recent improvements in the quality and distribution of medical treatments, known as antiretroviral therapy (ART), mean that people who have contracted the virus can now lead longer and more normal lives. While initially too expensive for patients in poorer countries, global action and campaigning has made ART more widely available. Kofi Annan, the former UN Secretary-General, played a key role in convincing major pharmaceutical companies to reduce the costs of antiretroviral drugs. By the end of 2012, some 9.7 million people in low- and middle-income countries such as Brazil, Cambodia and Zambia were accessing antiretrovirals. Research has also shown that ART prevents the onward transmission of HIV. This was mainly a result of more pregnant women living with HIV being given access to ART and a stronger focus on the long-term health of these women. Who is affected and how? National Geographic Society. The Global HIV/AIDS Epidemic in Numbers. Global Issues - Topic - AIDS/HIV.

Regional Office for Africa. The sixty-sixth session of the Regional Committee endorsed the document “HIV/AIDS: Framework for action in the WHO African Region 2016–2020”. 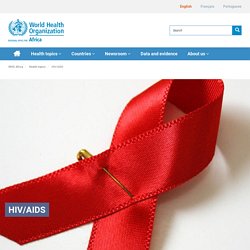 WHO is a cosponsor of the Joint United Nations Programme on AIDS (UNAIDS). Within UNAIDS, WHO leads activities on HIV treatment and care, HIV and tuberculosis coinfection, and jointly coordinates work on the elimination of mother-to-child transmission of HIV with UNICEF. Key populations The five key populations defined by WHO and UN partners deserve particular and specific attention. UNAIDS FactSheet en. Faces and stories - UNICEF. UNFPA - United Nations Population Fund. An evolving challenge HIV first shocked the world when it emerged in developed countries in the 1980s. 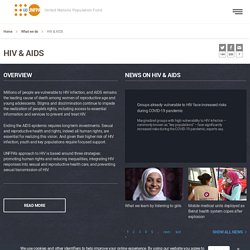 Sub-Saharan Africa was hit hardest and still accounts for over 70 per cent of new infections. Over the last decade and a half, an unprecedented global response has made HIV prevention and treatment services available in almost every country in the world, with over 18 million people accessing life-saving treatment by the end of 2016. Unfortunately, though, progress in reducing new infections has stagnated in recent years. Inequalities at the heart of the epidemic Despite progress in rolling out treatment, HIV remains one of the foremost health and development challenges of our time. Key populations – a term that principally refers to sex workers, men who have sex with men, people who use drugs, transgender people and prisoners – are particularly affected by the epidemic. Globally, men and women make up an equal share of the people living with HIV.

UNFPA’s response. United Nations - AIDS. In June 1981, scientists in the United States reported the first clinical evidence of a disease that would later become known as acquired immunodeficiency syndrome, or AIDS. 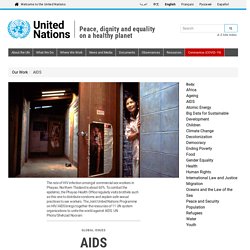 Its cause, the human immunodeficiency virus (HIV), was identified in 1983. Since the start of the epidemic around 75 million have become infected with HIV and around 32 million people have died of AIDS-related illnesses. In 2019, there were 38 million people living with HIV. HIV is found in the bodily fluids of a person who has been infected - blood, semen, vaginal fluids and breast milk. It can be transmitted through unprotected sexual contact. Antiretroviral treatment Over the ensuing decades, the rate of infection soared dramatically, as did the rate of fatalities. New HIV infections have fallen by 16% since 2010 (by 41% among children) and AIDS-related deaths have fallen by 55% since the peak in 2004. HIV - UN Refugee Agency UNHCR.