Profile of Bob Geldof. Bob Geldof is a rare kind of human being, he's a global superstar with no airs or graces. 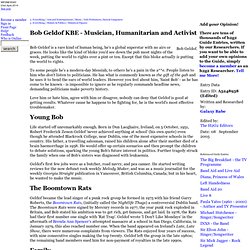 He looks like the kind of bloke you'd see down the pub most nights of the week, putting the world to rights over a pint or ten. Except that this bloke actually is putting the world to rights. To some people he's a modern-day Messiah, to others he's a pain in the a**e. People listen to him who don't listen to politicians. He has what is commonly known as the gift of the gab and he uses it to bend the ears of world leaders. Love him or hate him, agree with him or disagree, nobody can deny that Geldof is good at getting results. Young Bob Life started off unremarkably enough. Geldof's first few jobs were as a butcher, road navvy, and pea canner. The Boomtown Rats Geldof became the lead singer of a punk rock group he formed in 1975 with his friend Garry Roberts, the Boomtown Rats, (initially called the Nightlife Thugs) a controversial Dublin band.

Family Business Campaigns. ▶ BBC Radio Interview 2011(60 mins) BBC acuses Live Aid of failure. Bob Geldof has launched a furious attack on the BBC World Service over its claim that 95% of the $100m aid raised to fight famine in northern Ethiopia was diverted by rebels and spent on weapons. 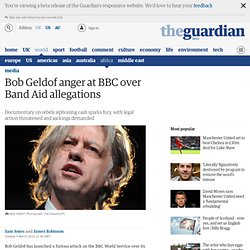 Writing in today's Guardian, the musician and mastermind of the 1985 Live Aid concerts accuses the World Service of a "total collapse of standards and systems", threatens it with legal action and calls for the sacking of the reporter behind the story, his editor and the head of the World Service, Peter Horrocks. Geldof also uses the Guardian's Comment is Free website to lash out at the journalist Rageh Omaar for penning a "ridiculous" opinion piece for the site on Monday in which the former BBC correspondent defended the corporation's story and its right to investigate the fate of millions of pounds of aid money. But Geldof has now announced his intention to go further. He also asks Omaar why Plaut's allegations have only now surfaced. Live Aid Charity. Live Aid In 1984 - Moved by images of young children in Africa dying of starvation, Bob Geldof organized with Midge Ure Band Aid, a "supergroup" of British musicians and singers which recorded the single "Do They Know It's Christmas". 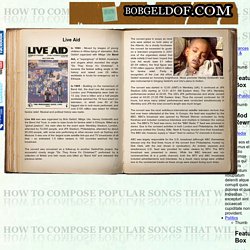 It became the fastest selling single in UK history and raised over £8 million worldwide in funds for emergency aid to Ethiopia. In 1985 - Building on the momentum of Band Aid, the dual Live Aid concerts in London and Philadelphia were held on 13 July. Over a billion and a half people worldwide watched the 16 hour event on television, in which over 60 of the biggest star in rock music performed, and over £100 million was raised for African famine relief. Live Aid was was organised by Bob Geldof, Midge Ure, Harvey Goldsmith and the Band Aid Trust, in order to raise funds for famine relief in Ethiopia. The concert was conceived as a follow-up to another Geldof/Ure project, the successful charity single "Do They Know It's Christmas?

" The song ▶ Do they Know it's Christmas ~ Band Aid 1984. Bob Geldof One page Biography. Singer, Songwriter, Activist, Philanthropist (1951–) Bob Geldof is best known as the singer of the band the Boomtown Rats and for his political activism, particularly his anti-poverty efforts in Africa. 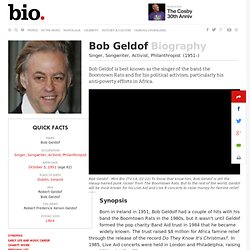 Synopsis Born in Ireland in 1951, Bob Geldolf had a couple of hits with his band the Boomtown Rats in the 1980s, but it wasn't until Geldof formed the pop charity Band Aid trust in 1984 that he became widely known. The trust raised $8 million for Africa famine relief through the release of the record Do They Know It's Christmas?. In 1985, Live Aid concerts were held in London and Philadelphia, raising an additional $48 million. Early Life and Music Career Famed rock musician, author and philanthropist Bob Geldof was born Robert Frederick Xenon Geldof on October 5, 1951, in Dublin, Ireland.

Geldof studied at Black Rock College in Ireland and worked in Canada as a pop journalist before returning home in 1975 to form the successful punk-rock group the Boomtown Rats (1975-86). Charity Work Videos. Official Bob Geldof website.