PhD Counseling Psychology student at the University of Minnesota

Untitled. Predicting which questions will be asked during an interview is difficult for job candidates. 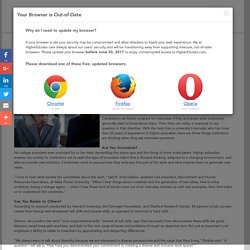 Sure, there are common questions that interviewers ask to start the conversation, like "Why do you want this job? " But those questions are about the candidate's story, a key part of the narrative but not the purpose for the interview. Hiring committees are really most interested in what's best for their institutions. Candidates can better prepare for interviews if they anticipate what institutions generally want to know about them. Then they can volley a response to any question in that direction. Are You Innovative? "I love to hear what excites the candidates about the work," said R.

Can You Relate to Others? Dinkins, who prefers the term "core organizational skills" instead of soft skills, says that successful hires who possess these skills are good listeners, avoid knee-jerk reactions, and look to the root cause of issues and problems through an objective lens. Why Squatting Hurts Your Knees. It’s a concept that other strength coaches and I try to get across to our clients. 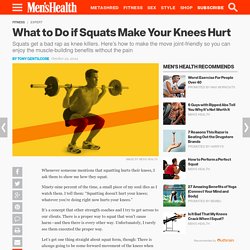 There is a proper way to squat that won’t cause harm—and then there is every other way. Unfortunately, I rarely see them executed the proper way. Let’s get one thing straight about squat form, though: There is always going to be some forward movement of the knees when squatting. Telling someone that the knees should never go past the toes because it’s dangerous is an archaic fitness myth. It needs to die. MN student testing faces big cuts after lawmakers slash budget.

Listen Story audio Minnesota students will see big changes in the number of statewide exams they take next school year after the Legislature chopped Minnesota's testing budget in half during the special session. 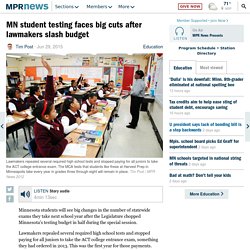 Lawmakers repealed several required high school tests and stopped paying for all juniors to take the ACT college entrance exam, something they had ordered in 2013. This was the first year for those payments. They're gone now, too. Two weeks after lawmakers finished their work, the Minnesota Department of Education is still combing through the education bill to see how the changes ordered by the Legislature will affect statewide assessments. The Minnesota Comprehensive Assessment GRAD tests in writing, reading and math will end. Gone as well are the Explore, Plan and Compass ACT tests, exams that helped students plan for college or a career. Without support, Minnesota students left behind at graduation. When Xavier Simmons walked into class in high school, he'd turn his desk backwards, put his head down and go to sleep. 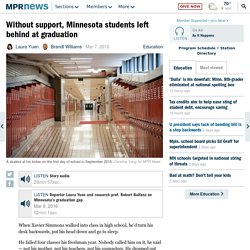 He failed four classes his freshman year. Nobody called him on it, he said — not his mother, not his teachers, not his counselors. Money for student counseling takes a back seat. Listen Story audio Lots of young, enthusiastic people want to be school counselors in Minnesota. 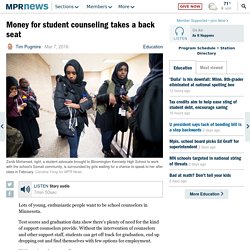 Test scores and graduation data show there's plenty of need for the kind of support counselors provide. Without the intervention of counselors and other support staff, students can get off track for graduation, end up dropping out and find themselves with few options for employment. "Kids can't perform as well academically if they've got some social and behavioral issues that aren't taken care of," said Lauren Salonek, a graduate student in Minnesota State University Mankato's counseling program.

"School counselors can help them sort through those issues so they can perform better academically. " • Related: Without support, Minnesota students left behind at graduation But compared to schools in other states, Minnesota schools don't hire many people like Salonek. School counselor-to-student ratios nationwide, 2014. Student support gets boost in Minnesota's supplemental budget. School districts will have an opportunity to hire more social workers, counselors and other student support staff with a $12.1 million grant program included in the Legislature's end-of-session spending plan. 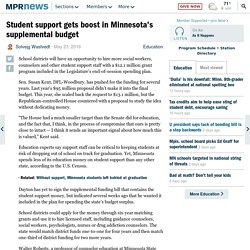 Sen. Susan Kent, DFL-Woodbury, has pushed for the funding for several years. Last year's $95 million proposal didn't make it into the final budget. This year, she scaled back the request to $13.1 million, but the Republican-controlled House countered with a proposal to study the idea without dedicating money. "The House had a much smaller target than the Senate did for education, and the fact that, I think, in the process of compromise that ours is pretty close to intact — I think it sends an important signal about how much this is valued," Kent said.

Education experts say support staff can be critical to keeping students at risk of dropping out of school on track for graduation. . • Related: Without support, Minnesota students left behind at graduation Sen. Overstretched school counselors would get state relief under new plan. Listen Story audio. 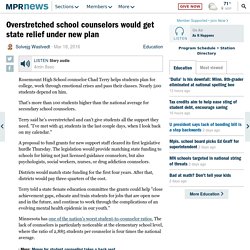 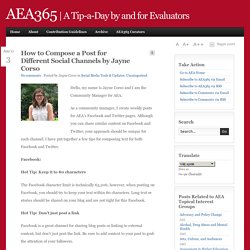 Because of my involvement in the TIG, I have reviewed annual conference proposals since 2008. Over the years I found that some proposals only had a title associated with needs or needs assessment, but these are were not needs assessments. Since needs assessments are often misunderstood, here I share what I think are the key elements constituting a needs assessment. Using cooking as an metaphor, even a skilled chef would not be able to prepare a tasty dish without the necessary ingredients. So, if you are going to do a basic needs assessment, certain elements must be included. The fundamental of a needs assessment is to assess need (attend or resolve a problem) for improvement of organizations or systems.

So how do we make this dish? Main Ingredient: Identifying Needs as Discrepancy Lesson Learned: A needs statement presented in discrepancy form is essential, as well as other components presented above. Data Visualization in Excel. TLDRHandout. Amazingly Simple Graphic Design Software – Canva. Piktochart. Login for quick audio transcription services.