Rasputin: Dark Servant of Destiny. Rasputin: Dark Servant of Destiny is a biographical 1996 TV film which chronicles the last four years (1912–16) of Grigori Rasputin's stint as a healer to Alexei Nikolaevich, Tsarevich of Russia; the heir apparent to the Russian throne as well as the only son of Tsar Nicholas II of Russia and Empress Alexandra Feodorovna; who suffered from hemophilia. 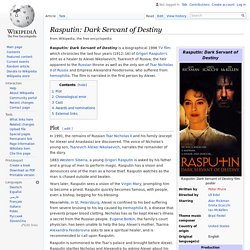 The film is narrated in the first person by Alexei. Plot[edit] In 1991, the remains of Russian Tsar Nicholas II and his family (except for Alexei and Anastasia) are discovered. The voice of Nicholas’s young son, Tsarevich Alexei Nikolaevich, narrates the remainder of the story. 1883 Western Siberia, a young Grigori Rasputin is asked by his father and a group of men to perform magic. Years later, Rasputin sees a vision of the Virgin Mary, prompting him to become a priest. ATTN: 'Inside Out' Without the 'Inside' Emotions Is Very Different. We need some new emotions for this one. 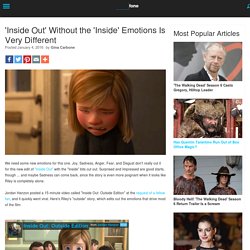 Joy, Sadness, Anger, Fear, and Disgust don't really cut it for this new edit of "Inside Out" with the "Inside" bits cut out. Surprised and Impressed are good starts, though ... and maybe Sadness can come back, since the story is even more poignant when it looks like Riley is completely alone. Jordan Hanzon posted a 15-minute video called "Inside Out: Outside Edition" at the request of a fellow fan, and it quickly went viral. Here's Riley's "outside" story, which edits out the emotions that drive most of the film: Inside Out: Outside Edition from Jordan Hanzon on Vimeo. 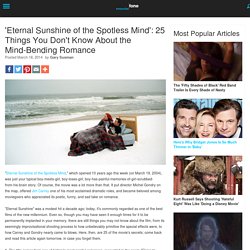 Of course, the movie was a lot more than that. It put director Michel Gondry on the map, offered Jim Carrey one of his most acclaimed dramatic roles, and became beloved among moviegoers who appreciated its poetic, funny, and sad take on romance. "Eternal Sunshine" was a modest hit a decade ago; today, it's commonly regarded as one of the best films of the new millennium. Even so, though you may have seen it enough times for it to be permanently implanted in your memory, there are still things you may not know about the film, from its seemingly improvisational shooting process to how unbelievably primitive the special effects were, to how Carrey and Gondry nearly came to blows.

Leaving Facebook... Step Inside This Bushwick Polyamory House: Gothamist. What’s With the Native American Subplot on UKS? Unbreakable Kimmy Schmidt, Netflix’s new series with a 30 Rock sensibility, is the show of the moment. 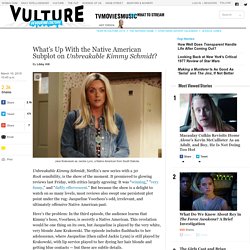 It premiered to glowing reviews last Friday, with critics largely agreeing: It was “winning,” "very funny,” and “daftly effervescent.” But because the show is a delight to watch on so many levels, most reviews also swept one persistent plot point under the rug: Jacqueline Voorhees’s odd, irrelevant, and ultimately offensive Native American past. Here’s the problem: In the third episode, the audience learns that Kimmy’s boss, Voorhees, is secretly a Native American. This revelation would be one thing on its own, but Jacqueline is played by the very white, very blonde Jane Krakowski. “Marvel’s Jessica Jones” “I promise that I won’t touch you until I get your genuine consent,” the sinister Kilgrave (David Tennant) announces, on “Marvel’s Jessica Jones,” the latest tentacle to emerge from the Marvel universe. 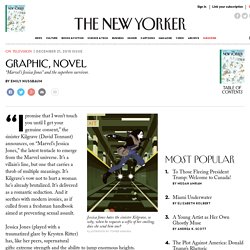 It’s a villain’s line, but one that carries a throb of multiple meanings. Best of Late Night TV: Jennifer Lawrence's Big Questions and Bradley Cooper's Glistening Sex Gel. If you're like us and value your sleep, you probably nodded off into your Ambien dreamland before the party started on post-prime time TV. 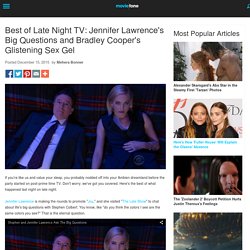 Don't worry; we've got you covered. Here's the best of what happened last night on late night.​ Culture Project - New York's Home for Socially Conscious Theater. 9GAG - Photos du journal. ‘Tangerine,’ The Most Groundbreaking Film Of The Year, Just Hit Netflix. Tangerine — you know, that movie shot on an iPhone you’ve heard so much about? 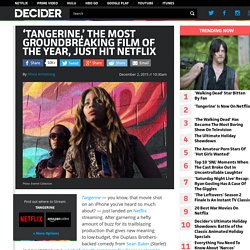 — just landed on Netflix streaming. After garnering a hefty amount of buzz for its trailblazing production that gives new meaning to low-budget, the Duplass Brothers-backed comedy from Sean Baker (Starlet) is now stirring up a word-of-mouth campaign for Oscar contention. The $100,000 indie is already making headway at the start of this year’s award season and Academy members are reportedly paying attention. How 'Jessica Jones' Helped Me Through My Own Rape. Over the past few decades, television hasn't been shy about using rape as a plot device. 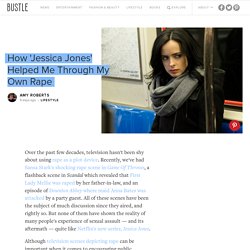 Recently, we've had Sansa Stark's shocking rape scene in Game Of Thrones, a flashback scene in Scandal which revealed that First Lady Mellie was raped by her father-in-law, and an episode of Downton Abbey where maid Anna Bates was attacked by a party guest. All of these scenes have been the subject of much discussion since they aired, and rightly so.

But none of them have shown the reality of many people's experience of sexual assault — and its aftermath — quite like Netflix's new series, Jessica Jones. Although television scenes depicting rape can be important when it comes to encouraging public discourse, plot lines centering around sexual assault are often problematic in their own way — many of them feel too cynical in their shock value, often revealing themselves to be more about the pursuit of making the show a talking point, rather than truly dealing with the issue of rape itself. What Rape Apologists Need to Learn From Jessica Jones. Kilgrave: “We used to do a lot more than just touch hands.”Jessica: “Yeah. 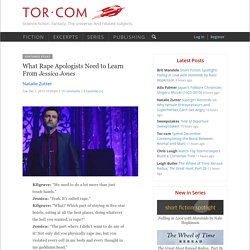 It’s called rape.”Kilgrave: “What? Which part of staying in five-star hotels, eating at all the best places, doing whatever the hell you wanted, is rape?” PSA: That Famous “Love Actually” Scene Is Actually The Fucking Worst. 20Q: Daniel Radcliffe. Q1You were 12 years old when the first Harry Potter film came out. 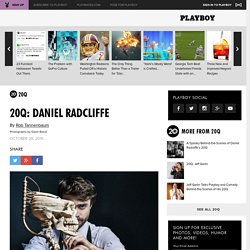 At what point did you realize the role was going to follow you for the rest of your life? It may have become clear to me only in the past few years. In your head, you imagine it will all go away once the series is over. When I was first going out to bars and pubs, I was trying to pretend I could have a normal existence. 10 Films Of The African Diaspora Currently Streaming On Netflix Okayafrica. Idris Elba in Beasts of No Nation On Friday, Netflix debuted its first original feature film Beasts Of No Nation on the streaming media platform and in select U.S. theaters. Based on the eponymous 2005 Uzodinma Iweala novel, the story follows Agu, a child soldier who plummets to unspeakable hellish depths as a bloody guerilla war ravages his nameless West African homeland.

Performances by the film’s stars Idris Elba and Ghanaian newcomer Abraham Attah have already garnered a tidal wave of critical acclaim and sparked a great deal of Oscar buzz. At the same time, others, like Shadow and Act‘s Tambay A. Obenson, have expressed valid reservations about the release of “yet another film about child soldiers within the African continent (the danger of a single story).” Moviegoers are officially able to log on to Netflix and determine for themselves whether the film lives up to the massive hype.

20Q: Daniel Radcliffe. Which Lesbian Movies Won’t Punch You In The Soul? A 2015 LGBT Film Festival Investigation. A couple of times a year a journalist from a mainstream media magazine/website asks to interview me or Riese about the history of lesbians in film. That’s been especially true these last few months as theaters have opened their doors to not one, but two movies with lesbian leads — and with a third one on the way. Lily Tomlin’s Grandma, Ellen Page and Julianne Moore’s Freeheld, and Cate Blanchett and Rooney Mara’s Carol: Has the landscape of lesbian cinema changed forever?? (Considering the fact that only 12% of the top grossing films last year featured female leads, full stop, I’m gonna say probably not.)

Recently I was doing an interview for a graduate student at NYU’s Tisch School of the Arts and she asked me something no one’s ever asked before: But what movie do lesbians watch when they want to feel, you know, happy? That’s valid. One of the best ways to peek into the future of lesbian movies is to dig into festival films. Girls Lost. Nice and Racist: What Ellen Degeneres Teaches Us About Racism. I have a few friends who love The Ellen Degeneres Show. Though I don’t watch the show, I’ve watched clips online when I was interested in seeing a particular guest. I always thought she was so friendly and funny. She seems like the kind of person who’d make you so comfortable in her home. 15 Jokes Only Extreme 'Gilmore Girls' Fans Understand. October 5 marks a very special day in history. Fifteen years ago today, Lorelai and Rory Gilmore entered our lives, and nothing was the same. The very first episode of Gilmore Girls aired in 2000, and today, fans are celebrating 15 years of reruns, marathon viewing sessions, and just a bit of obsession.

The citizens of Stars Hollow are more like family members than fictional characters to diehards. These fans might even fall asleep watching the show, and perpetually hear “Where You Lead” in their dreams. Regardless, the 15 jokes here are only for those fans who truly understand Gilmore Girls. One year ago, the show landed on Netflix, vastly improving the lives of super fans. Sit back, grab a cup of coffee, and enjoy these 15 jokes in honor of 15 years with the Gilmore Girls. 10 Queer Films That Will Teach You More LGBT History Than 'Stonewall' Though the first big-budget film about the 1969 Stonewall riots has finally reached theaters, it's becoming increasingly clear that Stonewall does no justice to Stonewall. A Mighty Girl - Photos du journal.

How 'Orange Is the New Black' Misrepresents Women's Federal Prison and Why It Matters  In 1994, Dorothy Gaines was a nurse technician and PTA parent raising her younger sister and brother and three children alone in Mobile, Alabama after the death of her husband. Local drug dealers, desperate to reduce their own sentences, named her as an accomplice in their sale of crack cocaine. Their self-contradictory testimony was the only evidence against her, yet her court-appointed lawyer failed to cross-examine them or raise a defense.

How your “Documentary” F**ks Over Sex Workers. Goddess from the machine: A look at Ex Machina’s gender politics. This article contains spoilers for Ex Machina and assumes the reader has seen or spoiled the movie for themselves. Boob(s On Your) Tube: 16 Summer TV Shows You Can Count On For Queer Characters. BBC Latest News - Doctor Who - 10 Things We Love About Captain Jack! SOML. 10 Best Feminist Comedies on Netflix. 7 Rad Queer Women Characters of Black and White Cinema. Review of “Why Are Thin People Not Fat?” BBC, 2008. Finally, a Summer Movie Season for Women. 25 Little-Known Facts About ‘Gilmore Girls’ Fifty Shades‘ Jamie Dornan Visited a Sex Dungeon and Was a Total Butt About It. How to Avoid the Terrible Tropes in Steampunk Literature, and How to Find the Gems. The Problem With "Lucy" And White Feminism. Rolling Stone And The Debate Over Sexual Assault Reporting Standards.

Netflix Is Now Streaming Black Mirror, the Best Show About Technology  10 Scientific Ideas That Scientists Wish You Would Stop Misusing. The Story Behind “Beasts of the Southern Wild” Introducing Sociology by Tim Kreider. Watchdogs have 'grave concerns' over Netflix deal with cable giant Comcast. FB discussion about Artist Puts Disney Princess Filter On 10 Real Life Female Role Models. The 33 Stages Of Finals Week. 10 Ways to Make Everyone Root for Your Amoral Protagonist.