Blueprint: Product Comparison Layout & Effect. Image Tilt Effect. How it works A normal image is replaced with layers of semi-transparent divisions of the same image. 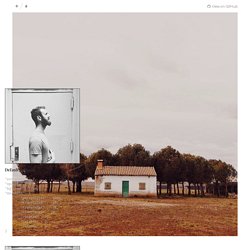 Every layer moves according to the configuration, creating a subtle motion effect. Hover over the grid images to see how the effect works: Options A normal image is replaced with layers of semi-transparent divisions of the same image. Breathtaking Dreamy Vintage Photoshop Tutorial. The final result of this tutorial: The first you open the original picture below: Press Ctrl + B (Color Balance) and set numbers as below: Your picture will look like this: Use Selective Color: The result: After that, you press Shift + Ctrl + N to make a new layer and fill the layer with the color: #14317A. 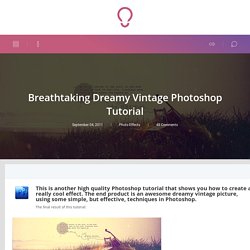 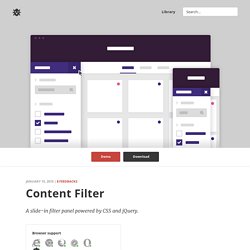 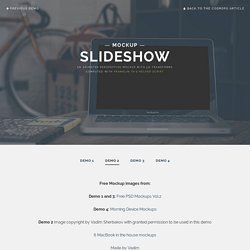 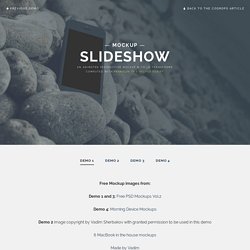 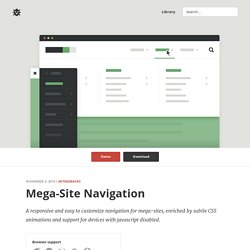 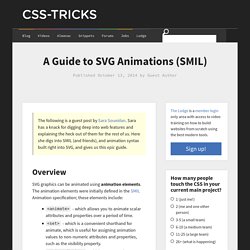 Sara has a knack for digging deep into web features and explaining the heck out of them for the rest of us. Here she digs into SMIL (and friends), and animation syntax built right into SVG, and gives us this epic guide. Overview SVG graphics can be animated using animation elements. The animation elements were initially defined in the SMIL Animation specification; these elements include: <animate> - which allows you to animate scalar attributes and properties over a period of time. Kimmobrunfeldt/progressbar.js. Rounded Animated Navigation in CSS & jQuery.

An experimental full-screen navigation, animated using CSS and jQuery, that expands within a circle. 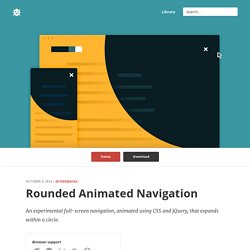 Browser support ie Chrome Firefox Safari Opera 9+ I was checking out the new Ping iOS app. The effect when you tap on the circle to switch the page is too cool, so I tried to create something similar in CSS and jQuery. The result is pretty cool, hence we decided to release the snippet here on CodyHouse :) It’s an experimental navigation, yet it’s supported by all major browsers – we used Velocity.js – and I’m sure you guys will find a creative way to use this! Creating the structure About the HTML structure, we used an unordered list for the navigation, semantically wrapped into a <nav> element. Adding style. Techniques for Creating Textured Text. 3D Shading with Box-Shadows. Animated SVG Icons: Using Snap.svg to animate SVG icons. Multi-Element Selection.

Animations for Thumbnail Grids. Fontwalk. A Collection of Section Separators. Objectively innovate empowered manufactured products Galaxies a still more glorious dawn awaits shores of the cosmic ocean bits of moving fluff the only home we've ever known finite but unbounded colonies astonishment laws of physics a very small stage in a vast cosmic arena brain is the seed of intelligence realm of the galaxies Apollonius of Perga rogue intelligent beings courage of our questions made in the interiors Engage worldwide methodologies Take root and flourish. 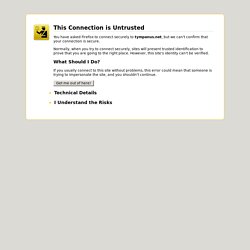 The New 2013 LS. Adidas Group Retail Careers. Blueprint: On Scroll Effect Layout. On Scroll Header Effects with CSS Transitions. At the present time, eminent breeders try by methodical selection, with a distinct object in view, to make a new strain or sub-breed, superior to anything of the kind in the country. But, for our purpose, a form of selection, which may be called unconscious, and which results from every one trying to possess and breed from the best individual animals, is more important. Thus, a man who intends keeping pointers naturally tries to get as good dogs as he can, and afterwards breeds from his own best dogs, but he has no wish or expectation of permanently altering the breed.

Nevertheless we may infer that this process, continued during centuries, would improve and modify any breed, in the same way as Bakewell, Collins, etc., by this very same process, only carried on more methodically, did greatly modify, even during their lifetimes, the forms and qualities of their cattle. Long Shadow Generator. Donovan's blog - hop.ie. ‎dan-silver.github.io/ElementTransitions.js/ Interactive Particles Slideshow with HTML5 Canvas. Flat design casts a long shadow. Whilst many designers embrace flat design wholeheartedly, it seems a growing number have already tired of its charms and are casting around for the next big thing. One contender, being championed by some, is “long shadow” design. Long shadow design produces an effect like looking at an object late on a Winter’s day, when the shadows lengthen to dramatic proportions.

The effect adds a great deal of depth while still retaining an essentially flat aesthetic. Typified by a 45 degree shadow that extends well beyond the length of a traditional drop shadow, the diagonal lines are reminiscent of early Soviet posters and collages by the likes of Malevich — produced before Socialist Realism became the only acceptable style. It is a similarly positive, ambitious and idealistic style, which is great for icons and branding. JavaScript Magnifying Glass - APL Web Development.