Introduction to CocoaPods. Make an app with several library dependencies with ease! 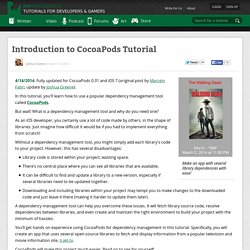 4/14/2014: Fully updated for CocoaPods 0.31 and iOS 7 (original post by Marcelo Fabri, update by Joshua Greene). In this tutorial, you’ll learn how to use a popular dependency management tool called CocoaPods. But wait! What is a dependency management tool and why do you need one? As an iOS developer, you certainly use a lot of code made by others, in the shape of libraries. Without a dependency management tool, you might simply add each library’s code to your project. Library code is stored within your project, wasting space.There’s no central place where you can see all libraries that are available.It can be difficult to find and update a library to a new version, especially if several libraries need to be updated together.Downloading and including libraries within your project may tempt you to make changes to the downloaded code and just leave it there (making it harder to update them later). Getting Started sudo gem update --system. Introduction to iOS Design Patterns. Most established mobile platforms have a set of design patterns, written or unwritten guidelines of how things should look, feel, and function. 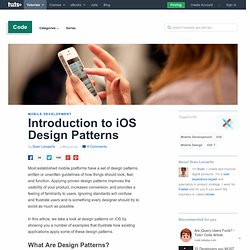 Applying proven design patterns improves the usability of your product, increases conversion, and provides a feeling of familiarity to users. Ignoring standards will confuse and frustrate users and is something every designer should try to avoid as much as possible. In this article, we take a look at design patterns on iOS by showing you a number of examples that illustrate how existing applications apply some of these design patterns. In short, a design pattern is a recurring solution that solves a specific design problem. Because it's recurring and users come across it often, they quickly become familiar with the solution the pattern provides. Stripe provides a design pattern for mobile payments. The hamburger icon, for example, has become a well-known design pattern.

Deference. Of course, it isn't only about the look of your application. Introduction to UIKit Dynamics. iOS 7 is a real conundrum. 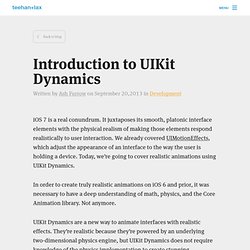 It juxtaposes its smooth, platonic interface elements with the physical realism of making those elements respond realistically to user interaction. We already covered UIMotionEffects, which adjust the appearance of an interface to the way the user is holding a device. Today, we’re going to cover realistic animations using UIKit Dynamics. In order to create truly realistic animations on iOS 6 and prior, it was necessary to have a deep understanding of math, physics, and the Core Animation library. Not anymore.

UIKit Dynamics are a new way to animate interfaces with realistic effects. This article is going to take you through the fundamentals you need to be aware of when using UIKit Dynamics before moving on to a fun demonstration of their power. The core component of UIKit Dynamics is the UIDynamicAnimator. Introduction to Objective-C for Programmers, part I. Introduction to Objective-C for Programmers contains the following parts already: Part I – literalsPart II – class cluster pattern, categories, description methodPart III – method swizzlingPart IV – error model, delegatesPart V – blocks If you are interested in iOS development and you still angry that you cannot grasp Objective-C easily like you do with other languages here is the simple and short quite for you. 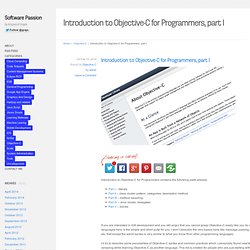 I won’t describe the very basics here like message passing, inheritance etc, that except the weird syntax is very similar to what you know from other programming languages. I’ll try to describe some peculiarities of Objective-C syntax and common practices which I personally found new/strange/amazing while learning Objective-C as another language. This list is created for people who are just starting with Objective-C but are experienced programmers in other languages and created already one or two simple Objective-C applications. [NSNumber numberWithInt:42] NSNumber *value = @42; Design Then Code: Building iOS Apps From Scratch. Before taking a crack at any Design Then Code project tutorials you'll need some knowledge of Xcode, Objective-C, Cocoa and UIKit. 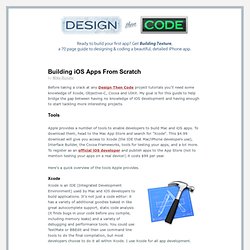 My goal is for this guide to help bridge the gap between having no knowledge of iOS development and having enough to start tackling more interesting projects. Tools Apple provides a number of tools to enable developers to build Mac and iOS apps. To download them, head to the Mac App Store and search for "Xcode". This $4.99 download will give you access to Xcode (the IDE that Mac/iPhone developers use), Interface Builder, the Cocoa Frameworks, tools for testing your apps, and a lot more. Here's a quick overview of the tools Apple provides. Xcode Xcode is an IDE (Integrated Development Environment) used by Mac and iOS developers to build applications.