The 60 best free Photoshop brushes. PHOTOBASH - Royalty Free Photo Reference Photos For Artists. PHOTOBASH. Coolors - The super fast color schemes generator! Textures.com - Textures for 3D, graphic design and Photoshop! Step to Painting a Girl by Johannes Helgeson – ARTBREW ARTBREW. Johannes is occasionally asked how he paint from imagination, and he has sometimes given demos to friends. 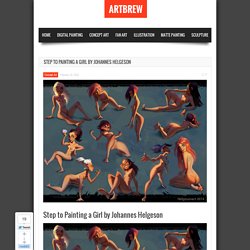 He figure he had indulge and try to explain for everyone. Beware, text and pictures ahead! This process is designed for a reasonably fast and predictable result. It’s aimed at beginners who are familiar with photoshop primarily, but might be beneficial for more advanced users as well. It’s meant for painting from one’s own imagination, and he had reached this process through years of experiments and advice from more senior artists (Adam Fordand Sam Nielson have outlined similar approaches in the past).

He is taking the liberty of giving you the PSD-file (reduced in size to 50%). Download Here 1. 2. For the shadows he fill a layer with a solid black, which he then lock into the positive shapes. 3. 5. 6. 8. 9. Flatten all, and adjust colors with adjustment-layers according to taste. he is also letting the original lineart remain in some places, totally intuitively. 10. Digital Brushes. “Just wanted to share some photoshop brush stuff. 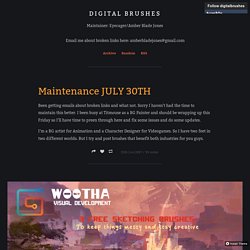 I hadn’t seen this anywhere, so I thought I’d post it. For those who don’t like to read, there’s a link to two brushes at the bottom :) I personally like painting with opacity set to pen pressure OFF and FLOW set to pen pressure most of the time. I like that it’s more direct, that the color is either right or wrong and I figure it out quickly without having to build opacity. The problem I had was that with flow set to pen pressure, the fall off from opaque to transparent was too abrupt.

I ended up trying out using a 50% grey texture, set to height driven by pen pressure, to get a smoother transition. I attached an abr of two brushes, one with just the grey texture, and one with the grey texture with noise applied to it. FYI this is for the standard photoshop brush, but also works nice for the mixer brush if that’s your thing.” Esquemas de color - Adobe Color CC. Movie-Screencaps.com - Movie caps galore! 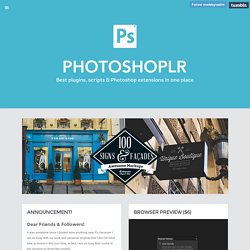 Currently supports English, Ukrainian and Russian text generation for three thematic categories: Technology, Economics and Politics. Relevant text generation Select one or multiple text layers and click Generate. All texts are randomly selected from a huge database on our secure server, so all your generated content will always be relevant to your design. No more lorem ipsum. Different length Title: one-liner, good for captions; lead: one or two sentences for small content blocks; text: few paragraphs of content. Category selection Designing a news website? Multiple languages All content can be generated in one of currently available languages: English, Russian, Ukrainian.

Username generation The plugin picks from some of the most common names and surnames in every language. Dates generation Titlemizer can also generate dates! Automagical pasting Credits: Dominik Levitsky. Photoshoplr. Custom Color-Palettes from Images. Creating Custom Color-Palettes From ImagesA Tutorial on How-To Convert Colors from Images to Custom Photoshop Swatches ConceptsOne of the first things I want to go over is nomenclature: Photoshop has a series of floating UIs, with different tools and attributes - Layers, Brushes, and yes, Swatches. 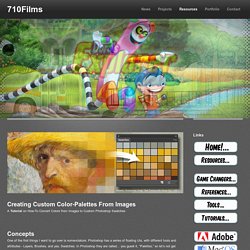 The ProcessAs you know, in Photoshop there are many ways of doing one simple thing. And voila! ZBrush Tutorial: Unify all subtools by Zareste on DeviantArt. ZBRUSH tutorial by soulty666 on DeviantArt.