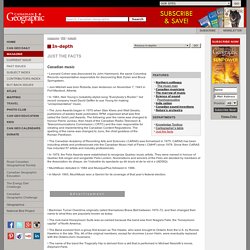 Louis Armstrong sings "Mack the Knife" UTE LEMPER ~ German Version of Mack The Knife. Mack the Knife Meaning. Mack The Knife- Mack The Knife - Ella In Berlin.wmv. Jokes for Musicians: Our 12 Favorite Musical Jokes. Body Percussion Classroom - Home. Basic Ostinatos. Harpsichord 101 - How It Works. A Nightingale Sang In Berkeley Square - Piano. What a real harpsichord sounds like. The Original Unmasking from "The Phantom of the Opera" (1925) Same Song, Different Movie: Toccata and Fugue in D Minor by Johann Sebastian Bach. This is the next entry in a series from 2012 that looks at the use of “needle dropped” songs, many of them popular tunes, in movies. 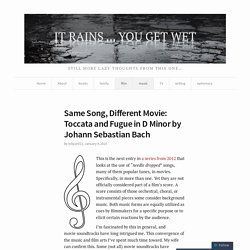 Specifically, in more than one. Yet they are not officially considered part of a film’s score. A score consists of those orchestral, choral, or instrumental pieces some consider background music. Both music forms are equally utilized as cues by filmmakers for a specific purpose or to elicit certain reactions by the audience. I’m fascinated by this in general, and movie soundtracks have long intrigued me. A few filmmakers have made it part of their work to incorporate well-known or popular song as a recurrent element. “… there’s a deep connection between the two arts, and sometimes that winds up creating an inseparable bond between the two in the viewer’s mind.” 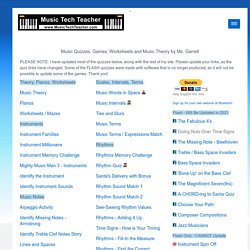 Garrett Scroll down the page to play elementary and middle school level quizzes, puzzles and games about music notes, rhythms, instruments, composers, and more. PLEASE NOTE: I have already updated 60 of the quizzes below, along with the rest of my site. Please update your links, as many of the quiz links have changed. Some of the FLASH quizzes were made with software that is no longer produced, so it will not be possible to update those games for mobile devices. Sign up for your own website at Bluehost! Help Support this Site... My jewelry site BeadsByKarenG.com The Music Tech Teacher website is a non-profit, personal educational site. Programs used to create the Quizzes: Articulate Storyline, Construct 3, Javascript, Hot Potatoes Adobe Flash Pro (Most will be converted to HTML5)

BlankStaffPaper. The Evolution of the Treble Clef. The Grand Staff. 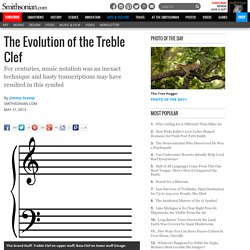 Treble Clef on upper staff; Bass Clef on lower staff (image: wikipedia) The curving flourishes of music notation have always been something a mystery to me, although every day I, like many people, use other arcane symbols without thinking twice about it. The at (@) sign, the dollar sign ($) and the ampersand (&), for example, all function like ligatures or some sort of shorthand. They’ve been demystified by popular use in email, clues on “Wheel of Fortune,” and their inclusion on computer keyboards. But music notation is a semantic system that is entirely different from the written word; a non-spoken alphabet of pitch and rhythm. 12th century music notation showing neumes and a single-line staff (image: wikipedia) So for my own edification, if nothing else, let’s start with the basics.

Another example of 12th century notation. The Evolution of the Treble Clef.