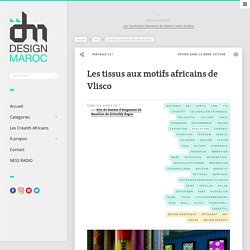 Vlisco: African Fashion on a Global Stage explores the history and creation of wax prints and how the textiles of Vlisco, a Dutch company, stitched themselves into the fabric of Central and West African culture. 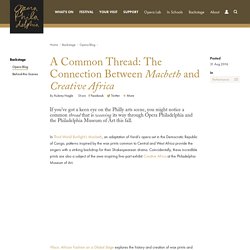 As explained throughout the Joan Spain Gallery where the exhibit is held, the Vlisco prints leave the company factory identified by stock numbers. It’s the female traders and their customers who name the patterns – after anything from politics to religion to pop culture – thus imbibing them with social status and value. Making a Case for the Renaissance of Traditional African Architecture. Last September, Nigerian Afrobeat musician Wizkid played to a sold-out house at the Royal Albert Hall in London, joining a growing list of illustrious African musicians, such as Selif Kaita, Youssou Ndour, Miriam Makeba and others, that have performed at that prestigious venue. 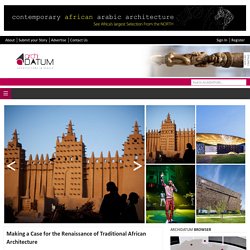 This event affirmed the unfolding cultural renaissance across the continent, but it also signified the rising global influence of African music, movies, fashion, cuisine and the arts. Sadly, traditional African architecture, especially in Sub-Saharan Africa, has not profited from this renaissance and has instead steadily lost its appeal across the continent. In spite of its towering influence in the pre-colonial era, it has largely failed to develop beyond the crude earthen walls and thatch roof architecture; for this reason it has remained unattractive to homeowners who often associate it with poverty. 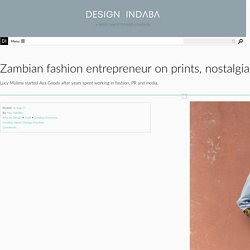 We're meeting at Skinny Legs, next to Dunkley Square, which I later find out, has a yoga studio upstairs, explaining the golden sneakers by the door and many other shoes that pile on as we continue our chat. Growing up in Zambia, Mulima was always surrounded by women who wore printed fabrics. But it was only in 2014, after years of living in Cape Town, that she went home for three months and went "print-mad" because all of sudden she was surrounded by beautiful prints everywhere and she would just buy fabric and ask tailors to make clothes for her. "A friend in Zambia had a clothing emporium and suggested I do a small range and she would stock it in her shop," she says she took it lightly at the time but eventually took her up on the offer. 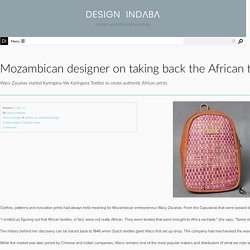 From the Capulanas that were passed down to her from her grandmother to her memories of older women draped in customary garb, textiles were a way to assert individuality while paying homage to age-old tradition. But one realisation would change the way Zacarias interacted with African textiles and set her on a path to change the game in her home country and on the continent. “I ended up figuring out that African textiles, in fact, were not really African. They were textiles that were brought to Africa via trade,” she says. “Some of them were an imitation of textiles that existed in West Africa. An overview of the history of South African art. South African art has always taken on the unique flavour of the country, from the 4 000-year-old cave paintings of the San Bushmen – the richest collection of rock art in Africa – to the homegrown conceptual art movement that sprang up as apartheid came to an end in the 1990s. 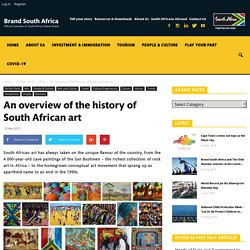 Brand South Africa reporter The 4 000-year-old gallery The San Bushmen, Africa’s oldest hunter-gatherers, lived in the massive Drakensberg range of mountains from 4 000 years ago until they were driven out by colonialists in the 19th century. Over that time, they created a vast body of art on the walls of caves and rock shelters – the largest and most concentrated group of rock paintings in sub-Saharan Africa. This rich collection prompted Unesco to inscribe the Drakensberg as a mixed natural and cultural world heritage site in 2000.