News – BlackPearl Collections. With a storied history encompassing the Ghana and Sosso Empires and 19th century colonialism – together with a rich culture of traditional music, art and dress – it would seem that West Africa embodies a hub of education, creation and innovation. 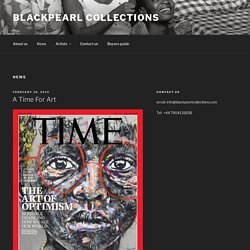 We take a look at the top ten contemporary art galleries in West Africa, from the Ivory Coast to Nigeria. Galerie Cécile Fakhoury | Abidjan, Ivory Coast You heard it here first: the Ivory Coast is fast becoming one of West Africa’s artistic hubs, with an impressive selection of contemporary art galleries springing up all over the capital. Galerie Cecile Fakhoury is just one of these, featuring exhibitions by artists that are sought-after not only locally, but internationally. Its clean, minimalistic setting allows the artwork to take centre stage, with its walls adorned by the likes of Vincent Micheam whose portrayal of bygone-era Dakar transports the beholder to a time of elegance and glamour. Naomi Wanjiku Gakunga (Kenya) Naomi Wanjiku Gakunga. 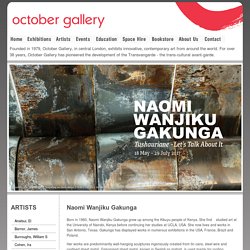 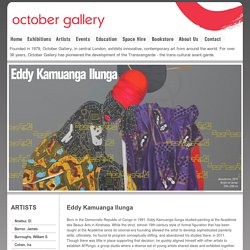 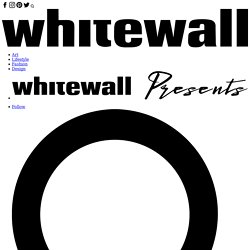 KKH: The exhibition is divided into two spaces (with supposedly paradoxical content) between the productive force that will be represented in the performance and installation of unfinished sculptures and, in the second space, an installation that will function as a kind of altar. Esther Mahlangu Is Keeping Africa’s Ndebele Painting Alive. While Mahlangu’s artistic foundation is in the centuries-long tradition of Ndebele craft, she has developed a visual lexicon and color palette that is specific to her. 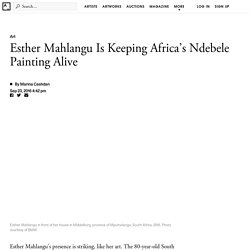 “In the old days, the decoration on the houses was always done with natural pigment and cow dung as that was the only material available,” she remembers. 10 Contemporary African Artists You Should Know. Mahmoud said. Khahle chipape. Laolu Senbanjo. Boris nzebo. The Islamic Treasures of Africa. Djenne Mosque – Mali ©James-Morris L’Institut du monde Arabe is currently exhibiting The Islamic Treasures of Africa, a show gathering both contemporary and ancient creations from African creators, influenced by islam.

The idea behind the eclectic election of artworks was to underline and connect the past and the present to create a coherent African islamic history, written by its inhabitants rather than the colons. As a hub reuniting several cults and ideologies, Africa witnessed the rise of sufism, a branch of islam where love and poetry are center stage. Reinterpreted by artist Maimouna Guerresi’s work, her photography, with its vibrant colours and contrast, stresses on the spiritual tradition of islam. African Rebirth. Abu Bakarr Mansaray (1970, Sierra Leone) Allien Resurrection [sic], 2004 Graphique, colored pencils, feutre on paper, 150 x 205 cm Framed : 160,6 x 212,5 x 4 cm – Courtesy CAAC – The Pigozzi Collection The exhibition Art/Afrique, le nouvel atelier constituted of 3 main sections retraces Africa’s grandiose landscape and future in the contemporary art world. 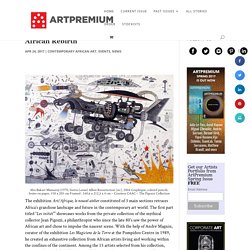 The first part titled “Les initiés”” showcases works from the private collection of the mythical collector Jean Pigozzi, a philanthropist who since the late 80’s saw the power of African art and chose to impulse the nascent scene. 7 artists from our Contemporary African Art issue (I) Peju Alatise Peju Alatise is an interdisciplinary artist, architect and author of two novels. 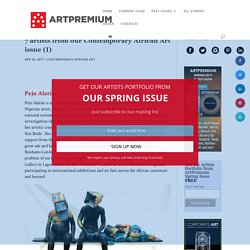 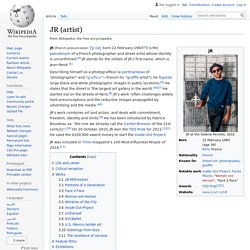 He used his iconic black and white stickers to make it appear as if the pyramid continued underground in an excavated crater. It was left in shreds within a day as visitors walked across it. JR (artist) - Wikipedia. Ibrahim Mahama: An Artist's Monument To Modern Ghana - White Cube - Artlyst. The first solo show in London of Ibrahim Mahama, a young maitre in African contemporary art has been mounted at White Cube Bermondsey. 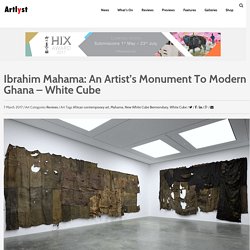 I discovered this artist at the first edition of 1:54, The Contemporary African Art Fair, which takes place every year in London at Somerset House, in Brooklyn at the Iron Works in Brooklyn and soon in Marrakech. In his early 30s, Mahama has graduated in Fine Arts, Science, and Technology from his native Ghana. He has done an impeccable artistic parcours since exhibiting with Saatchi Gallery, Charlottenborg in Denmark and Tel Aviv Art Museum among many prestigious artistic venues. In these new bodies of work, Mahama explores time and transference, privation and potential, as embodied through objects The immense White Cube space, closer to my perception of a museum than a commercial art gallery has been taken over by Mahama and his monolithic work.

Ousmane Sow - Page Principale. Ousmane Sow - Wikipedia. Ousmane Sow (10 October 1935 – 1 December 2016) was a Senegalese sculptor of larger-than-life statues of people and groups of people. Early life[edit] Sow was born in Dakar, Senegal, on 10 October 1935.[2]:39 After the death of his father in 1956, he left Dakar to study in France, where he obtained a diploma in physiotherapy.

30 Emerging Artists to Watch During Frieze Week. “I always knew I wanted to try it, but I never thought it was a practical thing to do, like for a career,” says Thaddeus Wolfe, regarding glass-making—the very field that’s shaped his career and landed him as one of the most exciting young artists at Collective Design fair this week. His dynamic vessels and lamps resemble funky crystal-like formations in acid colors or weighty geometric forms carved from chunks of ice or rock. It should come as no surprise to learn that Wolfe’s hometown is Toledo, Ohio—dubbed “The Glass City” since the early 1900s, home to the birth of the Studio Glass movements in the ’60s, and host to a world-renowned collection of glass at the Toledo Museum of Art. As a painting student at The Cleveland Institute of Art, Wolfe took an elective class in glass, which swiftly changed his course. “It was a really seductive material to use at the time,” he explains.

Now, based in Brooklyn, he blows glass just once or twice per month. The Top Emerging Artists of 2015. Like her fellow New Yorkers, artist-cum-alchemist Yi embraces germs. Following five years turning perishable substances (powdered milk, live snails) and, more recently, bacteria, into sculptures and installations, the conceptual artist made leaps and bounds this year. After her 2014–15 residency at Massachusetts Institute of Technology (MIT), where she worked with biologists to grow bacteria swabbed from 100 women in the art world (including artist Juliana Huxtable and gallerist Rachel Uffner), Yi debuted her cultures in a solo exhibition at Chelsea space The Kitchen in March.

Paa Joe is considered one of the most important Ghanaian coffin artist of his generation. He was involved sind 1989 in major art exhibitions in Europe, Japan and the USA. His fantasy coffins are in the collections of many art museums worldwide, including the British Museum in London. Biography[edit] Paa Joe with a sandal coffin in collaboration with Regula Tschumi for the Kunstmuseum Berne 2006. Artists. Art of Africa: The 50 best African artists. 10 Contemporary African Artists You Should Know From the 1:54 Art Fair.